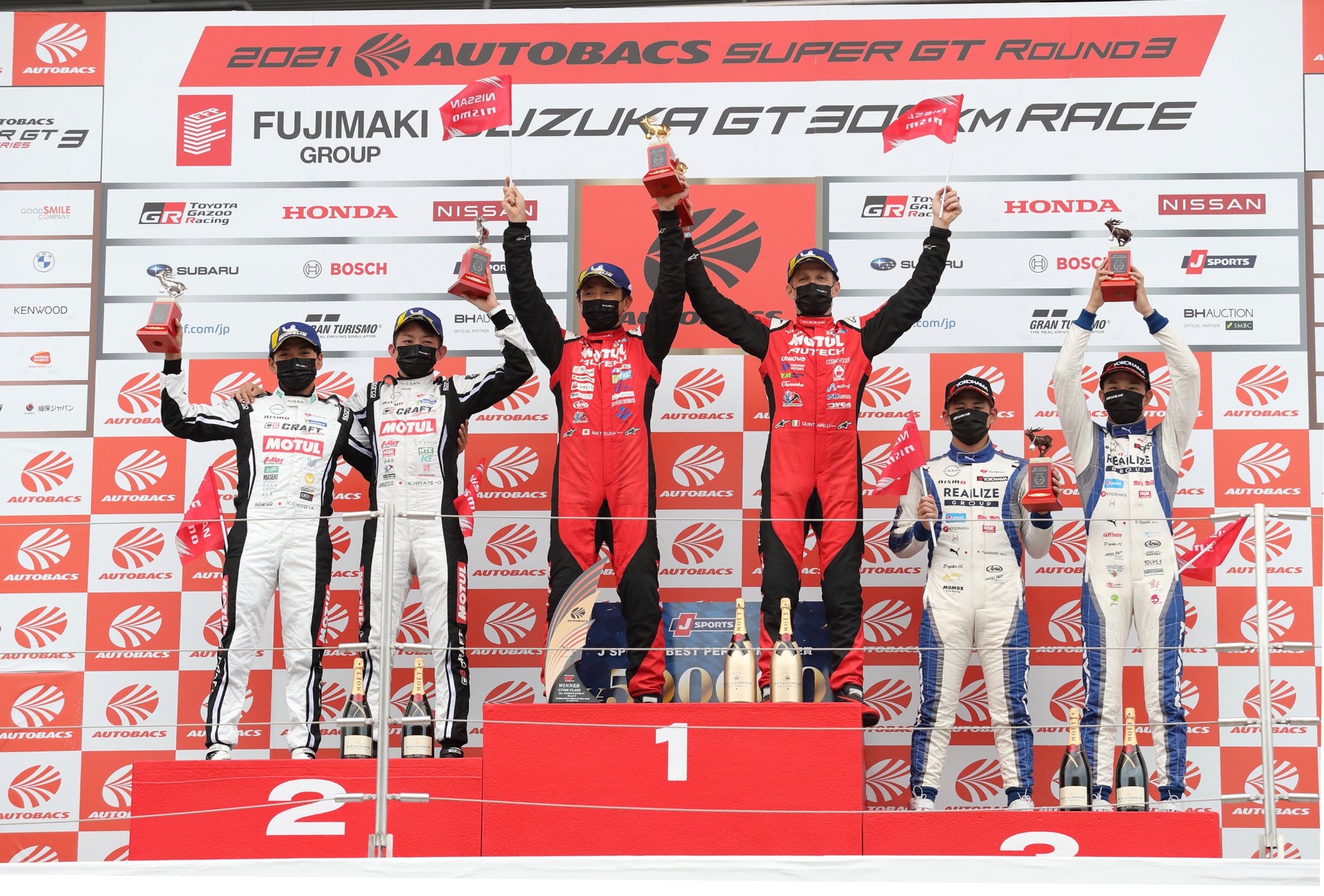 The Nissan GT-R NISMO GT500 achieved a clean sweep of the podium at round 3 of the SUPER GT held at Suzuka Circuit recently making it a day worth celebrating for all Nissan fans.

Although a chance of rain had been forecast, the race began with blue skies peering through the clouds and in the early stages the #23 GT-R of Ronnie Quintarelli and #24 GT-R driven by Daiki Sasaki maintained their positions in 3rd and 4th. At the same time the #3 GT-R and the #12 GT-R each gained a position and from that point on all the GT-Rs steadily moved further up the order as the race unfolded.

At the mid-point of the race, after all the GT-Rs had completed their pit stops, the #3 GT-R had successfully undercut the field and took the race lead with the #12 GT-R following in 2nd, and the #23 GT-R now in 3rd.

However, Tsugio Matsuda in the #23 GT-R then fervently pursued the #12 GT-R and slipped passed in lap 30 lap to move up to 2nd. From there he engaged in a fierce chase of the leading #3 GT-R, closing the gap with each lap, and catching him at the chicane in lap 41 to take the lead.

The #23 GT-R then went on to take its first win of the season, and the GT-Rs achieved a clean podium sweep with the #3 in second, and the #24 GT-R, which had temporarily dropped to 6th but fought its way back, following in 3rd. The #12 GT-R also finished in 6th to see all GT-Rs finish in the top 6.

Matsuda went on to say, “I really wanted to win on my home ground, so after Motegi, I worked hard on my physical condition and training for Suzuka. In the race, I felt that the car, the tires, and the team’s desire to win would really push me forward, so I really gave it my all. I really want to express my gratitude to them. I think we are getting stronger as a whole, so I want to keep working so that we get even stronger.”

In the GT300 class, five Nissan GT-R NISMO GT3s competed and, although the #56 Realize Nissan Automobile Technical College GT-R of Kiyoto Fujinami and Joao Paulo de Oliveira temporarily dropped down the order, they recovered to finish in 8th place. All other GT-Rs also completed the race.

The next round of the SUPER GT will be held at SPORTSLAND SUGO on September 12.