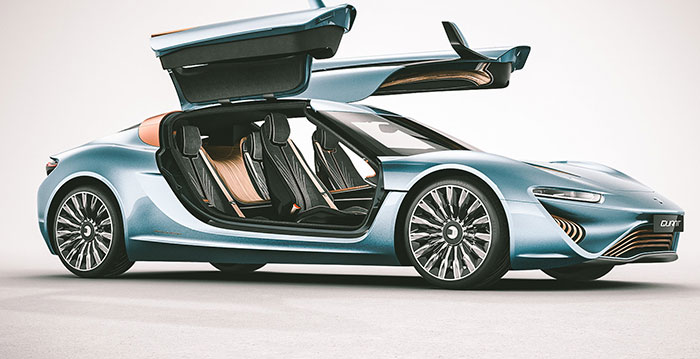 Quant – A Car Powered by Saltwater

The 85th Geneva International Motor Show lived up to the city’s magical love affair with automobiles, featuring Lichtenstein-based carmaker Quant’s e-Sportlimousine, a stunning four-seater concept that is powered by a remarkably powerful nano flow cell power pack. Nanoflow cells rely on a fuel that is based on saline water. However, people will not be rushing off to their nearest beach to pump seawater into their gasoline tanks. Nanoflow cells rely on a carefully formulated saline solution that is used to generate power when saltwater passes through a membrane. The result is a 920-horsepower car with a top speed of over 217 mph, accelerating from 0-62 mph in 2.8 seconds.

The Quant e-Sportlimousine represents a revolution in transportation and the use of nanoflow fuel cells that give the supercar an effective range of over 600 kilometers on a single load of saltwater. The vehicle’s twin tanks hold 400 liters of saltwater supplying a battery unit that stores power in supercapacitors. These charge storage components have been selected for their controllable and response energy release performance. The stored electric charge powers the four-motor electric powertrain. The e-Sportlimousine is a product of four years of research and development since the 2010 Geneva Motor Show. From concept to prototype, the car is the brainchild of inventor and supercar innovator Nunzio La Vecchia and has received approval for use on European roads by global testing and certification specialists TÜV Süd. The stylized sports supercar is expected to command a price of over $1.5 million. On the outside, the boasts a two-door, four-seater carbon monocoque body in crystal lake blue and an impressive 5.25-meter length. The interiors incorporate a “sensor-flow” schema that allows a driver or passenger to see how controls flow into each other, giving the cabin a futuristic cockpit-and-holodeck appearance. Other features include an interactive ash wood-theme dashboard and an Android infotainment system that tethers to a smartphone. The app allows remote access control and door control.

Nanoflow fuel cells are a coveted area of research around the world, but NanoFlowcell AG has achieved a landmark first in being the first company to receive approvals for actual road use of the groundbreaking nanoflow fuel cell-powered car. The company’s electrolyte composition remains a closely guarded trade secret while the powertrain efficiency is at eighty percent—a benchmark for future nano flow fuel cells. The whole system itself delivers four to six times the storage capacity of lithium-ion batteries. As the company works toward mass production of the e-Sportlimousine, research and development analysts continue to explore the use of this new powertrain technology for maritime, aviation, railways and heavy industrial vehicles. The car is expected to make its commercial debut in Germany.

The Quant e-Sportlimousine stretches the boundaries of alternative fuel technology, challenging the world’s growing dependence on conventional fuels. The car is also expected to be a benchmark for power pack research, providing the world with precious data about the capabilities of high-performance electrolytes in real-world conditions. Inventor La Vecchia has spoken about teaming up with Bosch to further development of the nanoflow cell technology.