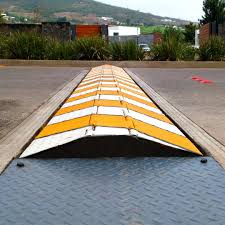 Speed bumps are considered by most motorists to be a necessary evil. They can badly damage a car’s suspension, especially if the driver is in a hurry. Speed bumps have now however gone high tech and the new “intelligent” speed bump is all set to change the general perception about speedbumps being a nuisance. Just like every other feature related to transportation, speedbumps are also getting a makeover.

Generally, a speedbump is a lump of concrete that is meant to slow down motorists near a school, a religious building or any area where it might be a good idea for them to slow down. Though speedbumps can help save lives, they can lead to increased pollution as most motorists almost come to a complete stop before the speed bump and accelerate after they cross the bump to return to their previous speed. This kind of stop-start driving can lead to increased pollution. Several studies have found that passing over conventional speed bumps leads to increase in levels of pollution in neighboring areas (more than 60% increase in NO2; almost 50 percent in PM pollution; almost 60 percent increase in CO). So, on the one hand, traditional speed bumps are saving lives, but on the other hand, they are polluting the environment.

The concept and design of the new smart speed bump has already been finalized. It is undergoing a trial run in Mexico in the Panorama neighborhood of León, Guanajuato.

The smart speed bump is equipped with a system that has the capability to detect the speed of an oncoming vehicle. Careful motorists who are driving at a speed that is below the 40 km/h limit will feel just the slightest bump and will not even need to slow down. Those who exceed the limit will have to slow down when the speed bump rises from the surface of the road.

As part of the trials, the speed bump or the tope as it is called in Spanish will be raised during opening and closing times at a nearby school. Pedestrians can control the speedbump by pressing a button so that they can cross the road safely.

The trial will be held for a period of three months. In the event that they prove to be successful, the municipality will explore the possibility of using such “smart” speedbumps on other roads as well.

Intelligent speed bumps have already been installed in Morelia, Michoacán, and Puebla.