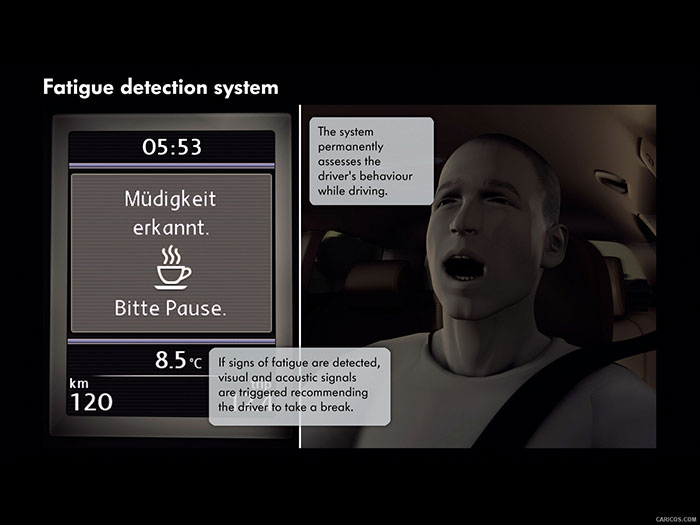 Dozing off at the wheel of a car is often a fatal to the driver and to others on the road—commuters and pedestrians alike. Long workdays, sustained sleep deprivation and disorders, the influence of medication, lifestyle choices, and the time of day influence the tendency to fall asleep at the wheel. A National Institute of Health report indicates that according to various studies performed around the world, sleepiness accounts for up to 30 percent of all vehicular accidents. The National Highway Traffic Safety Administration found that over 100,000 traffic accidents involving automobiles and over 1,500 fatalities are the result of dozing off at the wheel. German auto giant Volkswagen’s Hands-off Doze Control System is a technology that will mitigate the risk of a drowsy driver behind the wheel.

Volkswagen is in the news for all the right reasons with two new technologies. The first is an autopilot system that uses input from an array of navigational devices including laser guidance systems, cameras, radar and ultrasonic sensors in conjunction with Lane Assist, the company’s patented guidance system to enable an autopilot function when the car is traveling at more than 80 mph.

The second is a laser-and-camera guided system that detects when a car is drifting from its lane and initiates a visual and auditory warning to the driver. An advanced prototype of the Hands-off Doze Control System was premiered on the Volkswagen Nils concept car that features an emergency response system that is designed to save lives. This extension to the doze control system activates the brakes when a person or any form of obstruction suddenly appears in front of the car such as a pedestrian stepping off the curb into the path of the vehicle. The system uses onboard equipment includes an all-weather camera that works with an image processor to identify the position of the driver’s head, gaze, and eyelid position. This data is then processed through a prediction software that estimates a driver’s fatigue levels and can also detect if the driver’s head or eyes are no longer in the camera’s field of view, triggering an emergency warning or braking response.

Other automakers such as Lincoln have been experimenting with onboard alertness systems for some time now using a patented Lane Keeping System and Lane Keeping Aid system. In December 2014, Mercedes and LG premiered a biometric system on the new Mercedes concept car that uses sensors to track a driver’s eye movements and wideness as part of LG’s Advanced Driving Assistance System. This biometric system is also expected to take over braking and steering controls if the driver appears to have fallen asleep. Driver state recognition and monitoring systems have been around for some time now and continue to be the subject of significant research, with Volkswagen and Mercedes leading the thrust towards safer driving.