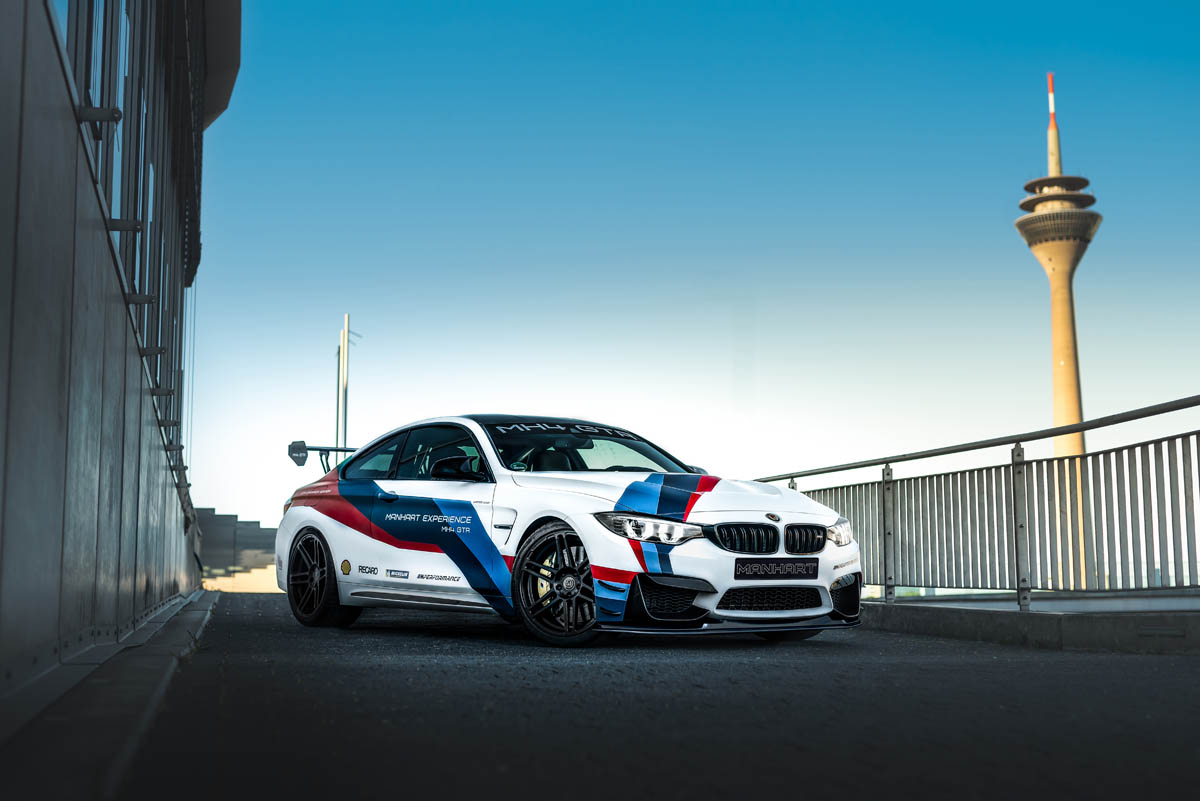 In 2012, BMW returned to DTM and thus once again completed the trio of the
major German premium manufacturers, who from then on again fought a tough
three-way battle in the touring car series. The Munich-based company was
successful straight away, and won both driver and manufacturer titles – at that
time still with the M3 DTM. Further titles followed, with the switch to the M4
DTM in the 2014 season. In the first season with the new car, BMW’s driver
Marco Wittmann was also able to win the drivers’ title.
To celebrate this success of this, and in 2016, when Wittmann was able to
repeat it, BMW launched strictly limited special models of the M4, the DTM
Champion Edition. MANHART Performance has now extensively refined one of
the 2016 models, which was produced in 200 units, giving it even more
exclusivity: presenting the MANHART MH4 GTR.
In contrast to what is usually the case with MANHART’s creations, the new
model designation of the car in this case does not yet give any indication of its
new performance value: Of course, the MH4 GTR still provides far more power
than the 500 hp and 600 Nm of the base vehicle, which has been made
possible thanks to water injection. The biturbo-fired S55 in-line six-cylinder
engine has been given an ECU remapping in conjunction with a MANHART
intercooler by CSF, as well as a MANHART carbon intake by ARMA,
MANHART aluminium charge pipes and a MANHART stainless steel exhaust
system with valve function. The latter connects to the engine via MANHART
“race” downpipes, which do not have TÜV approval due to the lack of catalytic
converters and are only intended for export. All in all, this results in an output of
708 PS and 980 Nm! In order to be able to continue to cope with its task
without any problems despite this brute power, the seven-speed dual-clutch
transmission has also received a MANHART upgrade. The chassis and the
formidable carbon-ceramic brake system remained untouched in the vehicle
shown here – but MANHART also offers individual optimisations on request.
The M4 DTM Champion Edition is a sensational car in every respect, even in
it’s production state. This is due to, among other things, the striking forged
wheels, the extroverted spoilers and the colour scheme of the bodywork in the
style of the DTM racing cars, with decorative stripes in the M colours on a white
background. Nevertheless, MANHART has also made further progress in this
respect, adding a carbon front spoiler with additional lip, a new rear wing and a
carbon diffuser. An additional spoiler lip on the boot lid and exterior mirror caps
– each from the M Performance Parts range and made of carbon – have also
been added. Furthermore, the M4 was given an even more striking body styling
– while retaining the original colour combination. The wheel arches now feature
forged, in-house MANHART Concave One rims in 9×20 inch and 10.5×20 inch,
covered with 255/35 and 295/30 tyres.
In the interior, there was also an unmistakable racing ambience even in its
original state. MANHART have further enhanced this atmosphere with a
steering wheel, upholstered in Alcantara from the M Performance Parts
portfolio, Recaro bucket seats with partial leather upholstery and various
carbon trim elements.