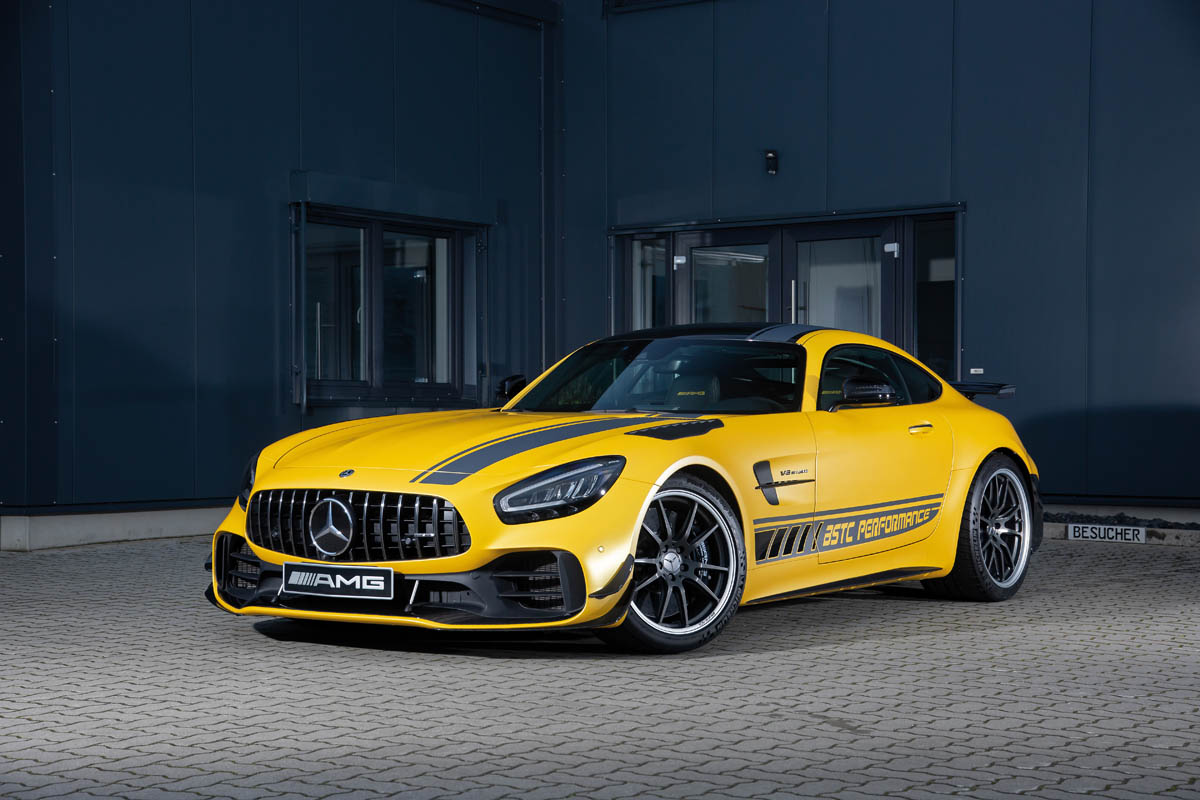 The experts at BS Teile Center, a company based in Buchholz (Aller), are not “tuners” in the
strictest sense of the word. Instead, they are long-time specialists in the sale of used
Mercedes parts – especially for AMG models. Despite this, Uwe Schorsch and his team
regularly “rework” Mercedes and AMG models under a label created specifically for such
projects: BSTC-Performance. By relying primarily on original parts from model variants with
superior features and drive systems, the BSTC team underscore the high degree of
customization that such OEM upgrades can achieve. This approach can still yield dividends
with absolute top-of-the-range models – as BSTC-Performance demonstrated with the
AMG GT R shown here!
In visual terms, the Swabian powerhouse has been extensively remodeled with original AMG
parts to reflect the look of the GT R Pro, which naturally included a rejuvenating facelift. The
entire front bumper, including the braced carbon-fiber blade attachments and carbon-fiber
flaps, the fender flares with integrated louvers, the side skirts with carbon-fiber inserts, the
carbon-fiber rear wing with Gurney flap, and the rear bumper bar with a striking carbon-fiber
diffuser to the side are all taken from the GT R Pro. In addition, the technicians installed new
headlights and rear lights.
The AMG Performance forged rims with a star design in a titanium gray matt finish and the
high-sheen rim flanges are also from the GT R Pro. Measuring in at 10×19″ on the steering
axle and 12×20″ on the drive axle, they have been fitted with Michelin Pilot Sport Cup 2 tires in
OEM dimensions 285/30R19 and 335/25R20 – each 10mm wider than in the civilian GT R.
This overhaul even extended to the brake calipers, which were upgraded with original parts.
The calipers on the GT R are gold, while on the GT R Pro they are exclusively black. As a
finishing touch, BSTC-Performance added the characteristic GT R Pro emblem with a green
“R” on a checkered flag background to the BSTC design body, featuring glistening Sunflower
Matt Metallic wrapping. By contrast, the “normal” GT R has a silver “R” on a yellow
background.

But that’s not all! While the genuine GT R Pro features extensive aerodynamics and chassis
upgrades compared to the GT R, its powertrain remained unchanged, comprising the 585 hp
variant of the 4.0-liter V8 biturbo with dry sump lubrication (M 178) and the AMG
SPEEDSHIFT 7-speed dual-clutch transmission. As a result, an upgrade with original parts
would hardly have been worthwhile. All the same, the BSTC-Performance engineers didn’t
want to leave it untouched! They decided to swap out the OEM turbocharger in favor of a
Weistec Engineering W.4 upgrade. At the same time as the beefier exhaust-driven
turbochargers, they also installed Wagner air coolers and IPE downpipes with 200-cell sport
catalytic converters. In the engine bay, the Weistec turbochargers’ red housings clearly show
where the power comes from, while the ARMA carbon-fiber intake with its shimmering fiber
material continues the bodywork’s carbon-fiber design. And, following the obligatory software
upgrade, the figures are certainly impressive: the performance diagram indicates 903 hp –
something even the AMG GT Black Series can’t match!
To ensure stable and efficient use of this powerful engine, the BSTC specialists also
upgraded the AMG SPEEDSHIFT 7-speed transmission from the AMG GT R, including a
reinforced clutch.