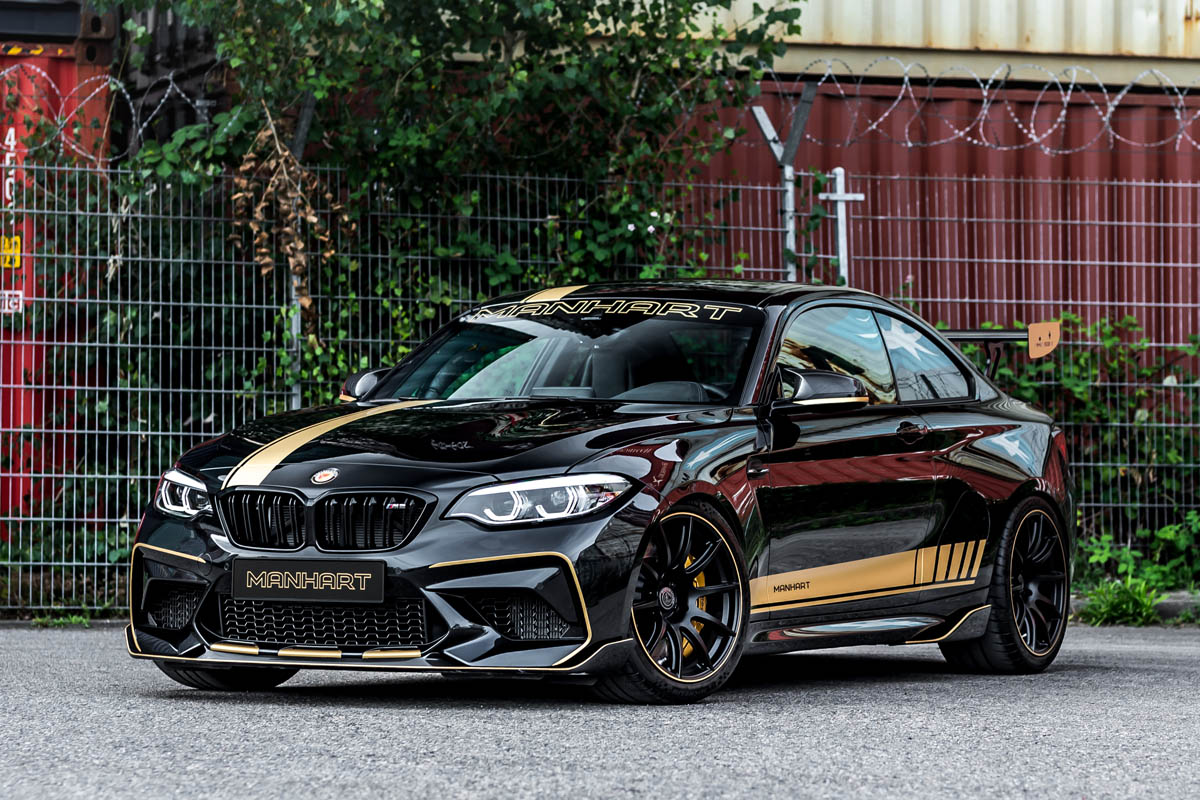 Slowly but surely the M2 of the second model generation is casting its shadow more and
more clearly. The prototypes have been on the road for a long time and have of course
already been in front of the lens of the photo hunters. It is only a few months until the new
smallest M is unveiled. But even the previous F87 is still an outstanding driving dynamic that
enjoys great popularity in the tuning and performance scene alike. The BMW specialists at
MANHART Performance have now extensively modified an M2 Competition and transformed
it into a version of the MH2 630 optimised for track use.
The new model designation already indicates it unmistakably – the S55 biturbo in-line sixcylinder

of the coupé has been given a significant power boost: thanks to the MANHART
Turbo Performance Kit and a CSF intercooler, the engine has been strengthened from the
factory 410 hp and 550 Nm to a remarkable 630 hp and 750 Nm. In addition, the MH2
features a complete MANHART stainless steel exhaust system with valve control, which
flows into four 90 mm carbon tailpipes at the rear. In addition, downpipes without catalytic
converters and a link pipe with 300-cell GESI catalytic converters are installed. To ensure
that the dynamic coupé decelerates even more steadily, the brake system from the M4 GT4
with six-piston calipers on 380 mm discs are fitted to the front axle, while the original brakes
have been retained at the rear.
Of course, a real track tool also needs corresponding suspension optimisations: The MH2
630 got a 3-way Clubsport coilover suspension from KW. In addition, aluminium rims in 19
inch with grippy 265/35 and 295/30 Michelin tyres were added. Other new features include
the front spoiler, side skirt attachments and the diffuser, which each come from the M
Performance range and are made of carbon, a Schmiedmann aluminium front bonnet and a
large rear wing from the M235i Racing. And, of course, the decal set with gold trim and
lettering applied to the black bodywork is also not to be missed.
Last but not least, the interior also looks like a genuine racing car: the rear is empty, instead
there is a full roll cage. This also serves to fasten the Schroth Motorsport harnesses with
which the occupants strap themselves into their Recaro Sportster CS seats. Rounding out
the package are carbon shift paddles, a carbon kit for the centre console, an Awron auxiliary
display and MANHART floor mats.