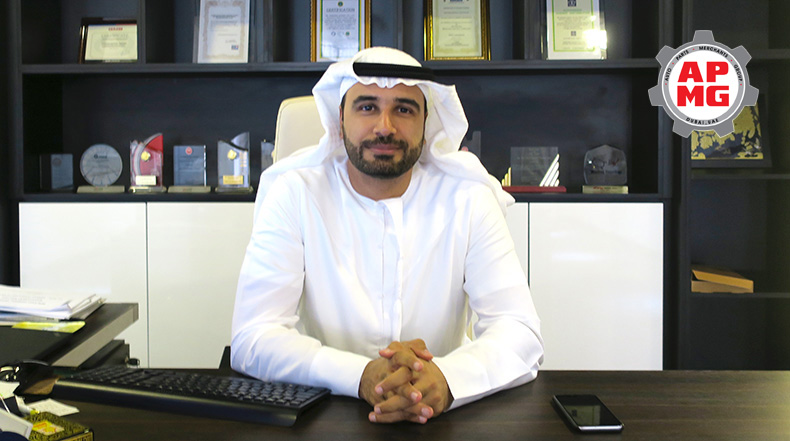 1. Can you please give us some general information about yourself and how you came to be a part of the automotive industry?

I started out as an intern in our family business, New East General Trading and in the past five years that I have overseen the company, business has grown three fold.

2. Please tell us more about APMG’s background and how it came to be established.

Auto Parts Merchants Group (APMG) is a licensed association requested by the government of Dubai. It’s a nodal, non-profit organization was formed to represent the interests of the Auto parts wholesalers and traders who have a presence in the Emirate of Dubai. APMG will serve as a platform for its registered members to discuss and resolve issues of common interest and will liaise between its members and various Government and statutory authorities on issues that affect the APMG community.

3. Where will APMG be located?

APMG will operate a new wholesale and retail hub for traders in spare parts close to Al Maktoum International Airport. This Spare Parts City will be part of the JAFZA Traders’ Market.

4. When it comes to members of the APMG, will you be including only car dealers or other companies involved in the automotive aftermarket?

Membership of APMG is open to wholesale and retail traders dealing with the sale and purchase of all services and products related to the auto industry including tires, batteries, auto parts, oils, lubricants and accessories. But they do need to need to be officially registered in Dubai and need to submit documents proving the same.

5. There are many such automotive zones in the UAE like in Al Awir and the new used car market in Sharjah. What will differentiate APMG’s automotive zone from other similar such zones?

From the point of view of traders who will be based in the zone, they will enjoy several benefits of a free zone license include facility for 100 per cent repatriation of their profits, and lack of any restrictions like labor or access restrictions. From the perspective of customers, many overseas customers who will not be able to gain access to the other auto zones will benefit from special visas which will be issued to give them entry into the zone, conduct their transactions and return home. The facility will serve as a one stop destination for shopping auto parts and will offer everything they need with multiple outlets under one roof. The UAE is known to be the hub of the automotive trade in the Middle East and serves as a meeting point for dealers and suppliers from all over the world.

6. Can you mention the main markets in which the member companies have strong partners and clients?

Primarily due to our strategic location, our member companies have strong trading links with other countries in the Middle East region, African countries and the countries which were a part of the former Soviet Union, the CIS countries.

7. Based on your experience in this market, what categories of automotive products are most popular in the UAE market?

When it comes to the automotive components belonging to the different categories, it is tires and batteries that account for the bulk of the imports and the goods that are re-exported. If we consider it from the perspective of the country of origin, the demand is highest for goods coming from Japan, followed by those coming from Korea.

8. When it comes to the customers you have in overseas markets for exports, are the requirements different? How does it differ in different export markets?

Ans: The demand for different brands varies from market to market. For example, in some countries there is greater demand for Japanese parts, while in others there is greater demand for those from Korea. Saudi Arabia is an example of a country in which Korean car brands and hence replacement parts and OE parts have become increasingly popular recently. When it comes to regulatory requirements for export and import also, different countries have different requirements and we prepare the conditions for shipment and the documentation accordingly.

9. The automotive market is currently suffering from stagnation or decreased demand in many key regions like North America and Europe. What is outlook for the market in the Middle East in the short-term and the long-term?

Many countries in the Middle East and Africa are suffering due to political instability, the drop in the price of oil and currency devaluation. For example, countries like Egypt, Russia and a few African markets have been affected by currency devaluation. Syria, Libya and Yemen are all markets that have been tremendously affected by political instability. Nigeria and Saudi Arabia have been affected by the drop in the price of oil. Nevertheless, in spite of these challenges, I feel that in the long-term prospects remain bright for the automotive aftermarket in the region.

10. Has the drop in oil prices affected the UAE market and if so, to what extent? Has it affected the inventory levels and the prices?

Yes, the drop in oil prices has definitely affected the trade. Indirectly, our currencies are pegged with the US dollar. Other countries which we deal with have experienced a drastic drop in the strength of their currencies and this has had definitely had an impact on the UAE market.

11. Electric vehicles are becoming more and more popular on a global basis. What effect do you this the advent of this technology would have on the automotive trade here?

As of 2020, only 2 per cent of the vehicles in Dubai are slated to be electric or hybrid. So, it will not have much of an impact now. About 10 years down the line, I believe this trend would cause a big change in the kind of demand we see for automotive products.

12. What has been the response from dealers and the leading automotive companies in Dubai to the formation of APMG?

The response from dealers and the leading automotive companies in Dubai has been overwhelmingly positive. The formation of APMG has definitely served to further strengthen the links between the individual members and facilitates the exchange of useful information.

13. What support will be providing to companies in terms of setting up their facilities in the zone and increasing their presence in the industry?

We will support them to the maximum possible extent. APMG is an organization that is supported by the government of Dubai and members of the organization will be eligible to receive several incentives and preferential rates from the government. As an organization, we will definitely negotiate on behalf of individual members with the government and they will have greater leverage than if they are trying to do things on their own.

14. Does APMG have any plans to work with similar organizations in other countries?

As of now, we are still in the process of enrolling and adding new members. Definitely, once we have become established in Spare Parts City, we will explore the possibility of cooperating with similar organizations in other countries.

15. If you had the chance to convey one message to our readers, what would that be?

The automotive aftermarket in Dubai offers immense potential and was valued at AED 40.5 billion in 2015. The UAE serves an important distribution hub for the entire MENA region and even beyond. APMG members can, by working together, help the industry in the region to get global recognition.