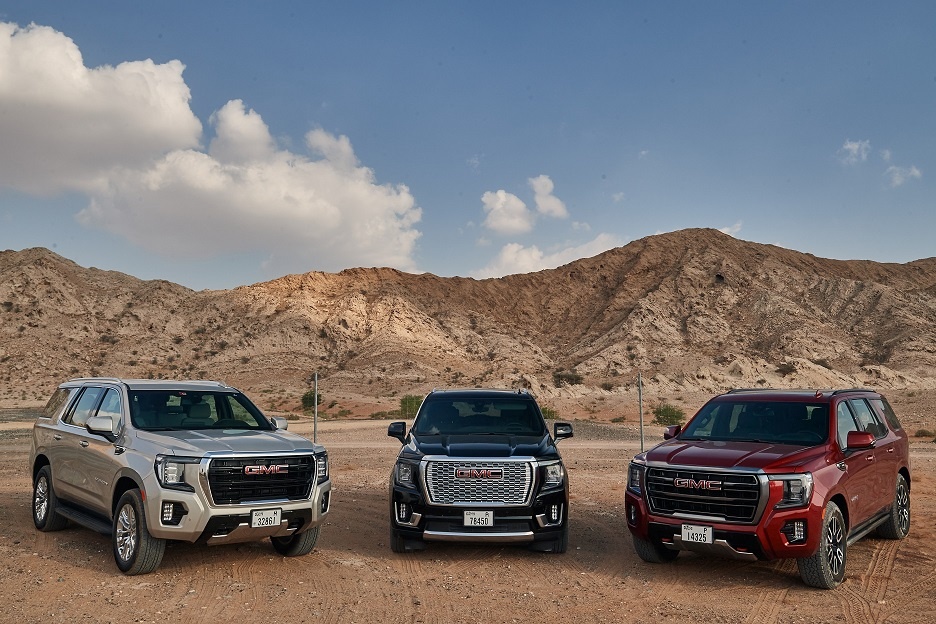 GMC Yukon Through the Years

Launched over two decades ago, the GMC Yukon has built a strong following of enthusiasts in the Middle East and beyond, who admire its practicality and off-road prowess. Today, the Yukon proudly reserves its spot as one of the region’s favorite full-size SUVs. Unsurprisingly, the premium SUV has also earned key industry accolades and awards for its performance.

Let’s go down the memory lane and walk through the birth and evolution of the Yukon throughout the years.

The birth of a legend

In 1992, the first-generation GMC Yukon was revealed and instantly gained public and critical acclaim. While the 1992 models were all two-door configurations, an all-new four-door version of the Yukon was launched in 1995.

However, GMC didn’t rest on its laurels and further enhanced the abilities of the Yukon. In the following years, GMC added several features, including the AutoTrac full-time all-wheel drive for the 1998 model. While the standard engine was a 5.7L V-8 delivering the optimum balance between power and efficiency, further options such as air conditioning for rear passengers were also added.

Sequels can be underwhelming, however, the follow-up model, which was launched in 2000, received immediate acceptance by the market. With significant enhancements and a more aerodynamic profile, and several updates to the interior, including more comfortable seats, new door panels and a remodeled dashboard, it was a hit. It also brought several leading-edge features such as side-impact airbags and more.

Over the next seven years, features such as an optional touch-screen navigation system were added and aerodynamic enhancements improved fuel efficiency.

Three is a magic number

The next Yukon hit the market in 2007 with a new platform. It exceeded sales expectation, despite a weakening market for large SUVs. It was more angular, which gave it greater road presence and established it as a more upscale vehicle. The cabin was also redesigned. The new trim included chrome-accented instruments, new door panels and seats. However, what the third-generation model retained was its ability to carry nine passengers in XL guise.

The power of four

It was clear that GMC had a winning formula on its hands. Launched in 2015, the fourth-generation upped the ante even further – it cut weight for fuel efficiency. New direct-injected 5.3L and 6.2L V-8 EcoTec3 powertrains were offered. Also available were fold-flat second- and third-row seats, and power-folding seats. It also featured several connectivity upgrades, as well as the next-generation MyLink system along with a rear-seat entertainment system.

In fact, GMC reached number five overall in the coveted J.D. Power Vehicle Dependability Study in 2016 and the Yukon specifically fared even better, ranking the highest in the full-size SUV segment.

In 2018, GMC launched a special edition Yukon to commemorate its heritage. The limited-edition model, which was available in the Middle East, featured chrome trim and personalization options, along with 20- or 22-inch polished aluminum wheels.

The legend lives on

The 2021 GMC Yukon with an all-new GMT T1XX platform, was launched in the Middle East last November. Equipped with loads of technology and performance features, the 2021 GMC Yukon is raising the bar in the premium SUV segment.

This latest edition features independent suspension along with Magnetic Ride Control.  Engine choices include a standard 5.3L V-8, and optional 420hp 6.2L V-8 with a 10-speed transmission, to meet the requirements of differing lifestyles. It’s also longer to ensure greater occupant comfort. The cabin is fittingly upmarket with standard entertainment screens in the Denali models. Additionally, the 2021 Yukon brings first-in-class, four-corner Air Ride Adaptive Suspension that delivers the optimal ride quality and can raise the body by up to 50 mm for additional ground clearance when traveling off-road. The 2021 GMC Yukon also offers available nine camera views, the most in the segment. Drivers and passengers are safer and more entertained than ever with a segment-leading 15-inch-diagonal multicolor Head-Up Display that projects speed, navigation, safety features and other driver-centric information when fully equipped.

GMC has also expanded the range to offer SLE, SLT, Denali and the all-new 4WD-only AT4, which includes exclusive leather seats, and a two-speed transfer case, making it an adventurer’s dream SUV.

Overall, the GMC Yukon has continually pushed the bar with its technologies, design and performance, through innovation. As a full-size SUV, the Yukon has become a part of the motoring fabric of the region – and given its breadth of abilities over the years, it’s easy to see why.