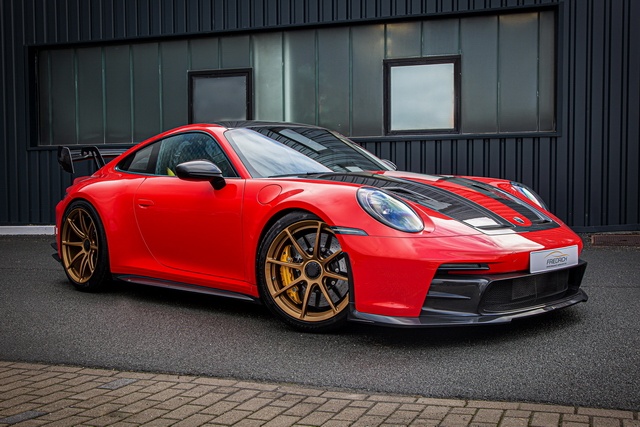 FRIEDRICH PERFORMANCE now offers a sophisticated refinement range for the new Porsche 911 GT3, which puts the spotlight even more on the sporty talents of the coupe.

The new tuning brand is a business unit of Friedrich Motorsport based in the Bavarian town of Lichtenfels. Owner and namesake Dirk Friedrich founded the company in 1992 and subsequently built it into a renowned developer and manufacturer of sport exhaust systems and carbon components with a workforce of 44 people at two locations today.
Not only customers from all over the world have put their trust in the expertise and quality made in Germany of Friedrich Motorsport for many years now: Numerous tuning specialists of world renown also commission the production of their components there.

FRIEDRICH PERFORMANCE is laying the foundation for a sophisticated tuning range for all current Porsche model series with a broad range of products for the GT3.
It includes various stainless high-performance exhaust systems with actively controlled butterfly valves for the four-liter, six-cylinder boxer engine of the 911 GT3. The FRIEDRICH PERFORMANCE system with racing headers coaxes an additional 22.8 kW / 31 hp of peak output from the engine and saves nine kilograms in weight compared with the production system.
Carbon stands for lightweight construction and maximum strength not only in motor racing. The new FRIEDRICH PERFORMANCE bodywork components are also manufactured from this hi-tech compound.
The FRIEDRICH PERFORMANCE forged wheels with diameters of 20 and 21 inches and the stainless coilover suspension with infinitely adjustable settings for height and damping were likewise specifically designed for the sports model.
In order to optimize the sound and performance of the four-valve, six-cylinder engine in the Porsche 911 GT3, the engineers of the German tuning specialist developed exhaust systems in various expansion levels with prices starting at 3,998 euros. At the bottom of the range is a stainless sports rear muffler, which can be combined with four different 100-millimeter tailpipe variants and a carbon embellisher. Customers can also opt for two different thermal integral insulation kits, which reduce heat radiation to the surrounding components in the engine bay. The 999 hard gold plating is particularly efficient and looks extravagant to boot.

These two options are of course also available for the top end of the FRIEDRICH PERFORMANCE range of exhaust systems for this Porsche: This racing system was developed for GT3 owners who like to run their vehicle on track days or in club races. They not only wish for weight savings of around nine kilograms, but also for significantly optimized performance. The system also includes elaborately calibrated racing headers that optimize the exhaust flow. In addition, 200-cell elements replace the production catalysts.

This combination lets the engine exhale much more freely, which results in a robust plus in performance. After the conversion to the complete FRIEDRICH PERFORMANCE system, the engine produces 22.8 kW / 31 hp more than in stock configuration. 398 kW / 541 hp at 8,500 rpm and a peak torque increased to 482 Nm mean the tuned sports car also delivers better performance on the road: The GT3 with seven-speed dual-clutch transmission catapults itself from zero to 100 km/h in just 3.3 seconds. Only 10.3 seconds pass to 200 km/h. The top speed is over 320 km/h.

To match these enhanced dynamics, FRIEDRICH PERFORMANCE offers a range of bodywork components that gives the 911 GT3 full-blooded racing looks and further optimizes the aerodynamics. Like in Formula 1 racing, all components are laminated from carbon fiber and then “baked” in an autoclave under pressure. This complex process guarantees maximum strength despite the lightweight construction and saves several kilograms in weight compared to the plastic production parts. All exposed-carbon components come with a choice of high-gloss or matt coating.

In order to give the sports car an even more distinctive face, the FRIEDRICH PERFORMANCE designers developed a new carbon center section for the front fascia. Its large, mesh-covered intake supplies the radiators in the bow with fresh air and sends cooling airflow to the brakes. A fin in each of the side cooling ducts produces additional downforce at the front axle. The new carbon lip spoiler at the front further amplifies this effect and consequently further increases the handling stability at high speeds. Carbon embellishments for the daytime running lights harmoniously round off the overall appearance.

The new, more strongly contoured trunk lid is also made entirely from exposed carbon. It features outlets for the air heated by the radiators and also sports two NACA intakes level with the front axle that put the finishing touches on the sporty looks.

The FRIEDRICH PERFORMANCE exposed-carbon rocker panels give the two-seater an even lower visual stance and route the airflow smoothly to the rear end. Carbon covers make the side mirrors look more dynamic as well.

The rear end of the GT3 is dominated already ex-factory by a large swan-neck-mounted wing. A new carbon component from FRIEDRICH PERFORMANCE replaces the standard black spoiler profile. Two larger side end plates ensure the unmistakable kinship with motor racing as does the subtle, but aerodynamically highly efficient Gurney flap attached to the rear end of the wing.

The development of these components focused not only strongly on spectacular looks, but also and above all on aerodynamic downforce. This is the principle behind the FRIEDRICH PERFORMANCE carbon diffusor with six vertical fins, too, which contributes to the high level of rear-axle downforce. A new carbon center section for the rear bumper frames the two 100-millimeter tailpipes of the FRIEDRICH PERFORMANCE high-performance exhaust system. Lateral carbon flaps on the rear fascia round off the bodywork modifications of the tuning specialist. Prices for the complete bodywork kit start at 35,000 euros. The individual components are also available separately.

In addition, FRIEDRICH PERFORMANCE offers a three-piece engine cover of exposed carbon to give the six-cylinder a visual upgrade.

The FRIEDRICH PERFORMANCE wheels with center lock are another high-end option for the 911 GT3. They are manufactured using state-of-the-art forging technology and make perfect use of the available space under the wheel arches. The front rims of size 9.5Jx20 in delicate eight-spoke design feature high-performance tires of size 265/35 ZR 20. The rear axle runs on 325/30 ZR 21 tires mounted on 12.5Jx21 wheels to provide optimal traction and grip in corners. The complete set sells for 14,500 euros.

FRIEDRICH PERFORMANCE fulfils the wishes of drivers of a current GT3 with particularly sporty ambitions as well. To this end, the company developed a height-adjustable stainless coilover suspension that can be tuned to the vehicle owner’s individual preferences. In addition, the damping at the front and rear axle is individually adjustable in terms of rebound and compression. A factory-fitted front-lift system remains fully functional after installation of these struts.

FRIEDRICH PERFORMANCE also refines the cockpit of the sports car by customer request. The range spans from high-quality floor mats with edging in body color to completely redesigned exclusive interiors crafted from the finest leather and Alcantara.