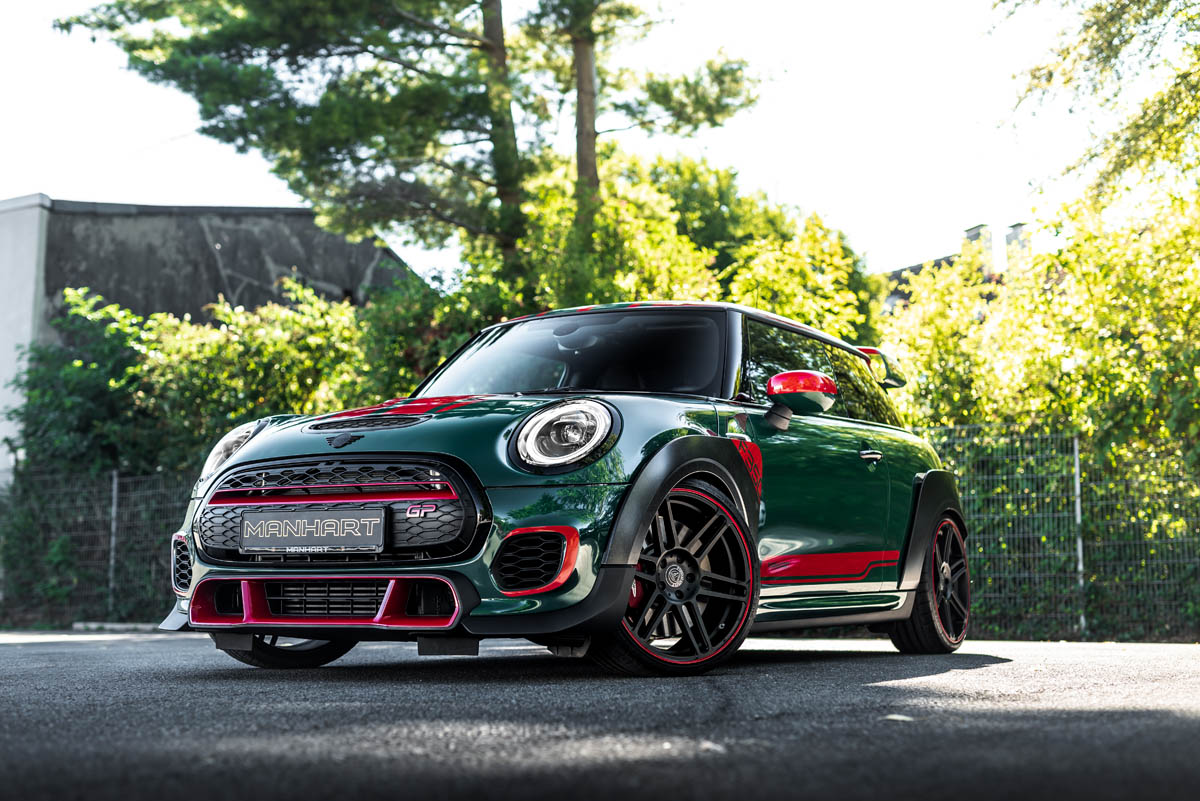 The motorsport tradition in Great Britain is huge. The United Kingdom has produced some of the World’s most prestigious race tracks, such as Brands Hatch and of course Silverstone, as well as many successful drivers and race cars. The characteristic and downright legendary paint finish for the latter developed into the colour “British Racing Green”. In reminiscence of past glorious motorsport successes, MANHART Performance has now chosen exactly this colour to be featured on the latest model of the MANHART F350 based on the MINI John Cooper Works GP.
The typical MANHART racing and decorative stripes, which are distributed over the body, are in a strong red color, creating a high-contrast look that further enhances the already considerably eye-catching factor of the MINI, due to its extroverted body kit. The foil design was realized by the Dutch specialists at JD Customs. The same color combination is also used for the bracing strut in the rear of the F350. Further visual highlights are provided by the matte black, MANHART Concave One alloy wheels with red accent lines, which are mounted on the axles of the power dwarf in the dimensions 8.5×19 inch with 235/30 ZR19 tires.
By the way: The new owner of the MANHART F350 shown here can be sure of the absolute exclusivity of his vehicle. This is because while MANHART Performance can choose from countless color combinations, each color scheme realized will only exist exactly once – including the one in British Racing Green and Red.
Furthermore, the extremely sporty appearance is by no means out of place here, because after all, MANHART expertly provided a performance boost for the turbocharged, B48 four- cylinder engine in the front of the JCW GP, which already provides 306 hp and 450 Nm in series production: 350 hp and 530 Nm maximum torque. The MANHART F350 is therefore extremely powerful. An ECU remapping by the Dutch MINI specialists from Beek Auto Racing as well as a MANHART intercooler from Airtec are responsible for the power increase. To round off the range, MANHART are offering a gasoline particle filter replacement pipe and a cat-back exhaust system with four-stage flap control manufactured at Remus.
On the chassis side, F350 customers are spoilt with choice: MANHART Performance offers either lowered springs, which lower the body by 20 millimeters at the front and 15 millimeters at the rear and have been installed on the vehicle shown here, or fully adjustable coilovers in three versions – each from AST Suspension in the Netherlands.
MANHART worked closely with Beek Auto Racing from the Netherlands in the conversion of the John Cooper Works GP to the F350. Among other things, Beek Auto Racing runs MINIspeed.eu, one of Europe’s largest web shops specializing in MINI. Thanks to this cooperation, MANHART will in the future be able to offer numerous other tuning components for the JCW GP on request.
All further facts as well as price and delivery information can be obtained at www.manhart- performance.de or directly from the MANHART Performance sales team. More information about the complete range of Beek Auto Racing products for the MINI JCW GP can be found at the web shop www.MINIspeed.eu. The web shop offers more than 1000 different products for the entire MINI model range.