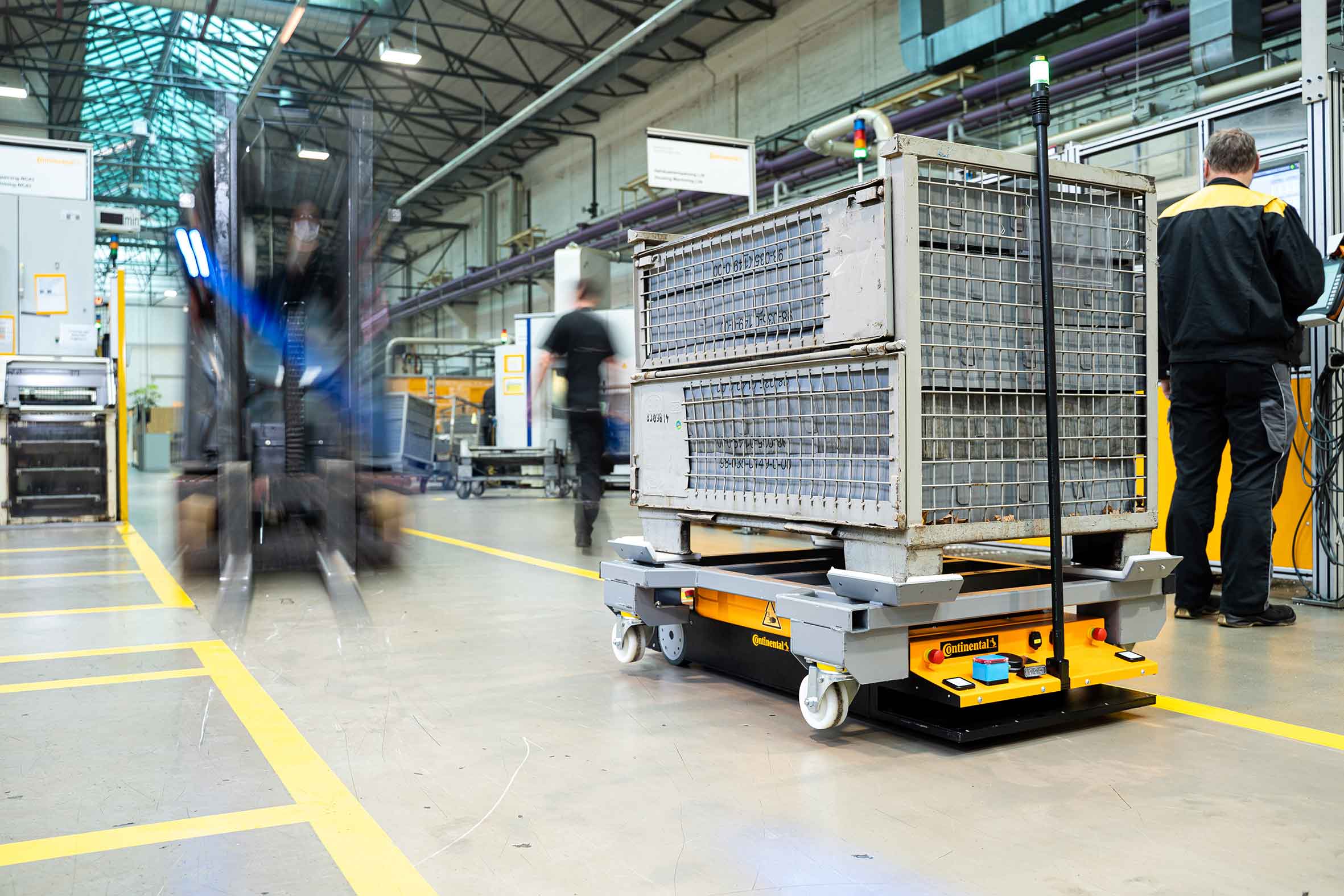 Continental Increases Efficiency with Mobile, Autonomous Transport Robots From Its Own Production

Technology company Continental develops a state-of-the-art, autonomous transport vehicle to further increase the efficiency of its own production. In the production of brake systems, for example, autonomous Automated Guided Vehicles (aAGV) developed and constructed in-house can transport heavy loads of over a ton. This technological solution is an integral part of Continental’s Industry 4.0 strategy. The aim is to optimize the entire value chain using digitized processes and data flows with high transparency and predictability, short throughput times, low inventories, and high flexibility.
Continental sees great potential in the development of its own aAGV. This applies to Industry 4.0 as well as for business areas such as logistics and many other fields of application in which the autonomous transportation of goods can be used to increase efficiency. In the meantime, aAGV are demonstrating their performance and carrying capacity day after day at Continental locations in Zvolen (Slovakia) and Frankfurt am Main (Germany). The first robotic vehicles in the development stage are now test-driving autonomously there between start and destination, transporting material for brake production. The aAGV align themselves to the correct direction and flexibly avoid obstacles. This in-house development was made possible by, among other things, a technology transfer from the passenger car sector. The expertise from highly-reliable automotive-grade environmental sensors such as radar, camera, ultrasonic, and Lidar, as well as sensor fusion and the environment model, was a key component in the development of the aAGV.
“Increasing efficiency in production is an important contribution to long-term competitiveness,” says Alexander Schmitt, Head of the Actuation & Future Products segment in the Hydraulic Brake Systems business unit of the Autonomous Mobility and Safety business area. “For that reason we decided to use the aAGV for heavy loads to develop a solution that helps us to shape our processes more flexibly and efficiently. With our own expertise combined with competent partner technologies, we’re developing an industrial solution that optimizes our production sequences and is also an attractive business idea.”

Optimization of material transport using mobile autonomous robots Automated guided vehicles play an important role in the material flow in a digitized factory: They reduce manual activities such as driving forklift trucks, speeding up transport, making it clear exactly what goods are available and where at all times, and making processes more predictable in general. At the moment the only mobile transport robots on the market are those that predominantly do not drive autonomously and only move on fixed routes between programmed start and target locations. Any change requires complex reprogramming, time and additional costs for modifications to the site. “The market research was sobering: We did not find any autonomous transport vehicles that met our requirements,” says Schmitt.
During the design, production, and assembly of the aAGV, the project team was able to build on the experience gained in the automotive sector. Technologies such as sensors from the passenger car sector were combined with control technology, mechatronics, and conventional mechanical engineering. Only the electric drive train and the software for controlling the vehicle are based on the technologies available on the market. The aim is for the aAGV to be available worldwide as a basic technology for use in production at Continental.
In order to design the aAGV to be particularly maintenance-friendly at the development stage, the development team is using its practical experience from industrial production. Of course, the findings from ongoing test operation in real-life conditions also flow into the planned production version in response to this. Volume production is to begin after the test phase. It is also planned to offer the system outside Continental at a later point in time.