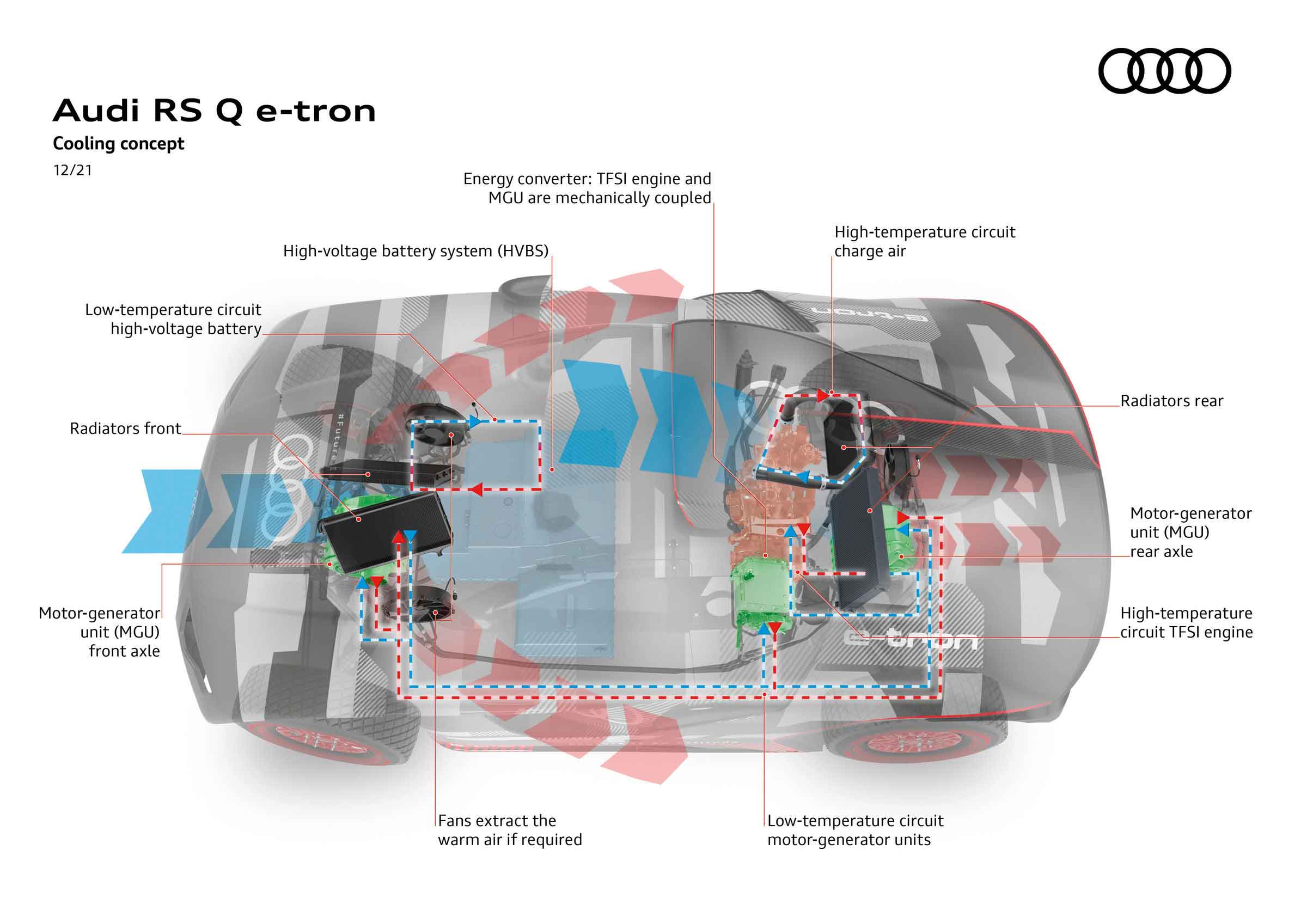 The futuristic exterior of the Audi RS Q e-tron perfectly reflects its advanced concept with electric all-wheel drive and an energy converter. In order to perfectly temper the complex, and in some cases, highly stressed systems, Audi has implemented an elaborate cooling system.
“Audi has never contested the Dakar Rally before. The first question we asked ourselves was: How do we get the heat out of the car?”, says Sebastian Fröber, the engineer responsible for the cooling systems, summarising the central question regarding cooling. “We started with CFD simulations for the aerodynamics of the overall vehicle. Then we designed the individual cooling systems.” Audi’s experience with complex cooling requirements, such as in the three-time Le Mans winner R18 e-tron quattro with hybrid drive or in Formula E, helped in this process.
However, the objectives are clearly different: whereas maximum aerodynamic efficiency was the priority in the Le Mans sports car, the desert prototype is about the best possible heat dissipation. Several cooling circuits ensure the right temperature.

The low-temperature circuit for the high-voltage battery (HVB)

The heart of the electric drive is the high-voltage battery system. To keep it at the right temperature, Audi uses a coolant called Novec, which does not conduct any electric currents. This low-temperature circuit has a radiator under the front hood.

The low-temperature circuit for the motor-generator units (MGU)

The combustion engine is mechanically coupled to an MGU that generates the electricity for the high-voltage battery. It transfers its energy to two other MGU units – one drives the rear wheels, the other, the front wheels. When the power flow is reversed – i.e. during braking – both units recuperate energy and feed it back into the battery. These three MGU assemblies are connected via their own low-temperature circuit. It dissipates its heat via the left radiator in the front end of the vehicle. The low-temperature circuits pose a very special challenge for the engineers.
While even in bright sunshine there is a good cooling effect in the much hotter high- temperature circuit and the cooling water does not begin to boil, the work for the low- temperature systems is much more difficult. “This is because 40-degree desert air only marginally cools 60-degree coolant because of the small temperature difference,” says Fröber.

The power steering and jacking circuit

An oil cooling loop is also located in the left front air duct in front of the low-temperature radiator. It circulates the hydraulic oil for the power steering, which is subjected to high loads during off-road driving. The system also supplies the two jacks on the right and left side of the vehicle via valves in case a puncture forces the crew to change the wheel.

The two high-temperature circuits for coolant and charge air

The drive system of the Audi RS Q e-tron also includes an energy converter. The highly efficient TFSI engine, which is positioned transversely behind the passenger seat, has a fluid circuit with a radiator. An engine oil circuit is thermally connected to this system via a heat exchanger.
Exhaust gas turbocharging requires a second cooling system: the compressed intake air flows into the engine through an intercooler. The liquid and charge air cooler sit side by side above the rear axle. The cowl on the roof divides the air flow between the two radiators. “In difficult passages, for example when crossing dunes at slow speeds, this air flow may not be sufficient,” says Sebastian Fröber. “For this reason, a fan sits behind each of the two radiators, which can extract the warm air if necessary.” The warm air then exits at the rear of the Audi RS Q e-tron.

Designed for the toughest loads

The cooling system in the Audi RS Q e-tron is designed for maximum loads. “We last secured the thermals in Morocco in November,” says Sebastian Fröber. “Carlos Sainz traversed the soft sand of a dried-up riverbed with deliberately taped cooling air intakes in a lengthy test. All systems worked flawlessly.”

Despite all the power losses evident in the cooling requirements of power units, Audi has built a rally prototype with high efficiency. In the world of motorsport, this vehicle is a milestone for long-distance driving with its electric power transmission and energy converter. The TFSI engine, which runs on around 200 kilowatts of power, is extremely efficient when operating between 4,500 and 6,000 rpm. Its specific consumption is well below 200 grams per kilowatt hour. As a result, Mattias Ekström / Emil Bergkvist, Stéphane Peterhansel / Edouard Boulanger and Carlos Sainz / Lucas Cruz in the Audi RS Q e-tron not only hurry through the desert at the Dakar Rally at a good temperature, but also very efficiently.