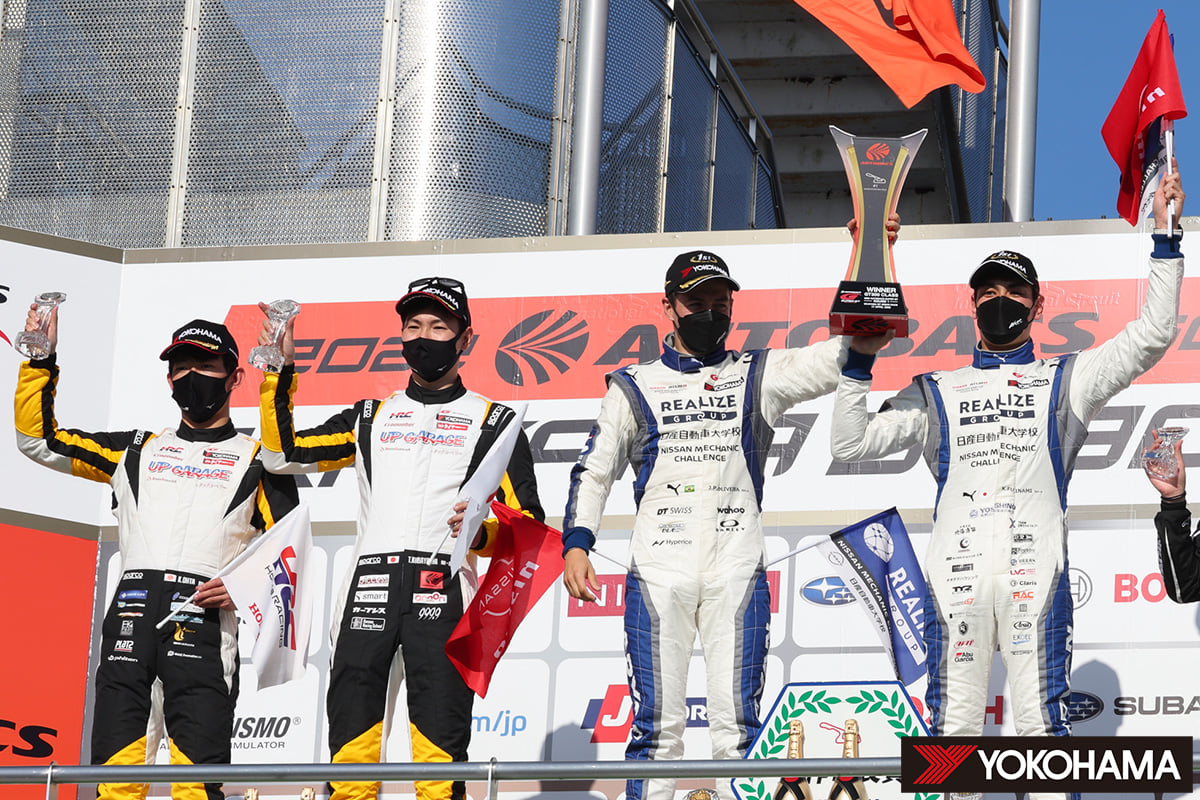 The Yokohama Rubber Co., Ltd., is pleased to announce that cars running on its global flagship ADVAN brand tires finished first and second in the GT300 class at the opening round of the 2022 AUTOBACS SUPER GT series, Japan’s ultimate touring car racing series. The opening round took place under clear skies on April 16-17 at the Okayama International Circuit in Okayama Prefecture.

KONDO RACING’s REALIZE NISSAN MECHANIC CHALLENGE GT-R (Kiyoto Fujinami/Joao Paulo de Oliveira) finished first, followed by TEAM UPGARAGE’s UPGARAGE NSX GT3 (Takashi Kobayashi/Kakunoshin Ohta). Starting in the No. 5 position, Fujinami moved his REALIZE NISSAN MECHANIC CHALLENGE GT-R into the lead in the race’s early stages before passing the baton to Oliveira. The REALIZE NISSAN MECHANIC CHALLENGE GT-R held the lead over the rest of the race and took the checkered flag to win Round 1 for the second year in a row, a great start to its challenge to recapture the series championship it won in 2020. Meanwhile, the UPGARAGE NSX GT3, starting in the No. 4 position, moved up to third place with Kobayashi at the wheel until the first pit stop. Thereafter, rookie driver Ohta raced stably over a rather long stint to capture second place and the team’s first podium finish since Round 3 in 2020.

Under Yokohama Rubber’s three-year (2021–2023) medium-term management plan, Yokohama Transformation 2023 (YX2023), the consumer tire business aims to maximize the sales ratios of high-value-added YOKOHAMA tires, namely the global flagship ADVAN brand, the GEOLANDAR brand of tires for SUVs and pickup trucks, and various winter tires. YX2023 also positions participation in motorsports activities as crucial to the company’s effort to develop new tire technologies that will further strengthen the ADVAN and GEOLANDAR brands. Yokohama Rubber therefore is again participating in a wide variety of motorsports events in Japan and around the globe, from top-category to grassroots events. In this year’s SUPER GT series, Yokohama Rubber is supplying its tires to 15 teams competing in the GT300 class and two teams racing in the GT500 class.