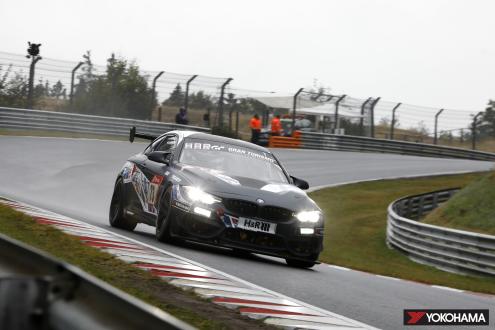 The Yokohama Rubber Co., Ltd., is pleased to announce that a vehicle equipped with its ADVAN racing tires came in first in the SP8T class at the 48th Nürburgring 24-Hour Endurance Race (ADAC TOTAL 24h-Rennen) held in Germany on September 26–27. This year’s race was run mainly on a wet track amid rainy and foggy conditions but the victorious vehicle raced to victory safely without incidence as it was equipped with YOKOHAMA’s “ADVAN A006” tires when the course was wet and “ADVAN A005” for dry conditions.

Of the 97 machines that competed in this year’s Nürburgring 24-Hour Endurance Race, seven ran on YOKOHAMA tires, including four BMWs entered by Germany’s Walkenhorst Motorsport team. Walkenhorst’s No. 73 BMW M4 GT4 finished first among SP8T class entrants and 19th overall. The winning team’s drivers were three 19-20-year-olds from BMW’s junior team—Daniel Harper, Neil Verhagen, and Max Hesse. The team started the race in the pole position for the class after finishing at the top in its class in the qualifying round, but it temporarily slipped to fourth place before racing back into the lead three hours after the start and quickly raced out to a full lap lead over the second place car. The race was halted for about 9.5 hours owing to the bad weather, but after it resumed Walkenhorst’s No. 73 BMW M4 GT4 never relinquished its lead. Meanwhile, Walkenhorst Motorsport’s No. 101 BMW M6 GT3, which held the top ranking in the NLS (Nürburgring Endurance Series) and was considered a contender for the championship in the 24-Hour race, finished 12th in its class and 12th overall despite trouble which forced the team to make a lengthy pit stop. KONDO RACING, which finished 9th overall and 8th in the SP9 class in its first Nürburgring 24-Hour challenge in 2019, did not participate this year owing to concerns about the spread of COVID-19.

The technology strategy outlined in Yokohama Rubber’s Grand Design 2020 (GD2020) medium-term management plan positions participation in motor sports activities as crucial to the company’s effort to be at the vanguard of the development of new tire technologies. Yokohama Rubber is therefore participating in a wide variety of events in Japan and around the globe, from formula and touring car races to rally, off-road, and kart races.