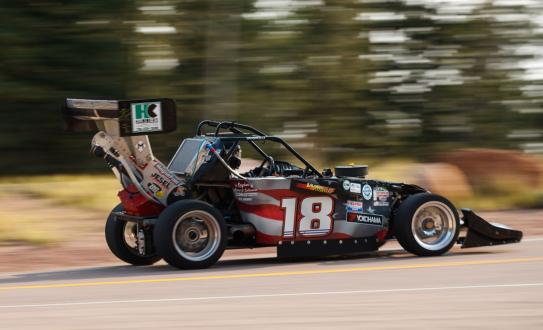 The Yokohama Rubber Co., Ltd., is delighted to announce that a car running on YOKOHAMA’s ADVAN racing tires captured the overall championship at the 98th Pikes Peak International Hill Climb, held this past August 30 in Colorado, USA. The overall championship was won by Clint Vahsholtz, who was competing in the Open Wheel division in a 2013 Ford Open. Vahsholtz set a new course record in the Open Wheel division by covering the 12.42-mile course in 9:35:490. His victory run was underpinned by the solid grip and traction provided by “ADVAN A005” tires.

Clint Vahsholtz claimed his first overall championship in his 29th challenge in the Pikes Peak race. About YOKOHAMA tires that helped him become the new “King of the Mountain,” Varsholtz said “The ADVAN A005 tires gave me the confidence I needed to push me hard as I could in the ever-changing conditions on the mountain. You can be sure I’ll be on YOKOHAMA tires when I come back to defend my crown in 2021.” Several other cars equipped with ADVAN racing tires also fared well, finishing 2nd in the Unlimited division, 3rd in the Open Wheel division, and 3rd in the Pikes Peak Open division. YOKOHAMA also supported the Porsche Pikes Peak Trophy by Yokohama by providing ADVAN A052 street sports tires as the control tire for this race that pits drivers of Porsche Cayman GT4 Clubsport vehicles against each other.

The Pikes Peak International Hill Climb is a hill climb race with a long and illustrious history dating back to 1916. It is also known as the “Race to the Clouds” as the course starts at an elevation of 2,862 meters and covers about 20 kilometers before reaching the finish line at an altitude of 4,300 meters. Cars competing on YOKOHAMA tires include a YOKOHAMA-sponsored electric vehicle (EV) that captured the class championship for three years in a row from 2010 to 2012, setting new time records for EVs in each of those years.

The technology strategy outlined in Yokohama Rubber’s Grand Design 2020 (GD2020) medium-term management plan positions participation in motorsports activities as crucial to the company’s effort to be at the vanguard of the development of new tire technologies. Yokohama Rubber is therefore participating in a wide variety of events in Japan and around the globe, from formula and touring car races to rally, off-road, and kart races.