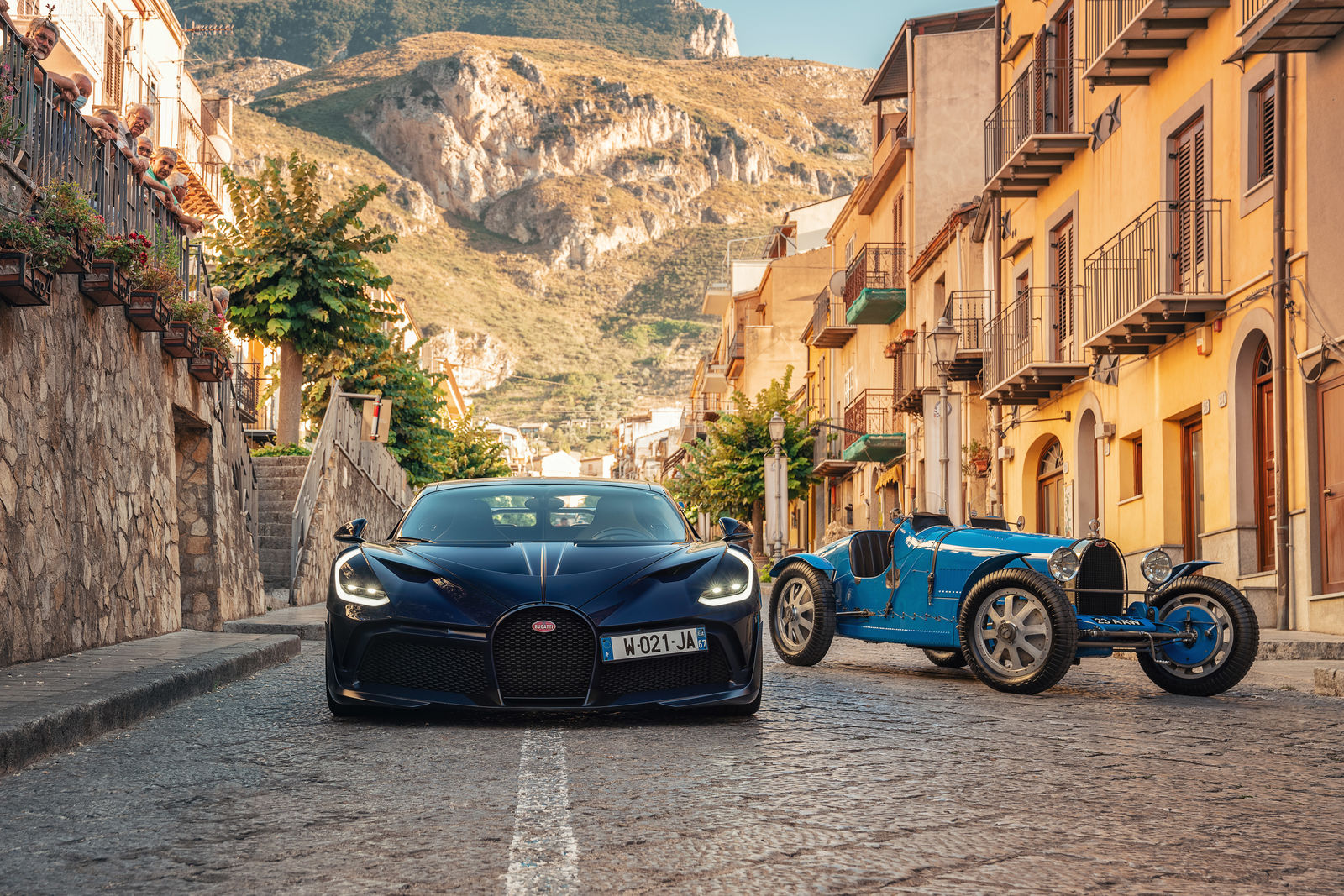 Targa Florio, Type 35 and Bugatti Divo1. Three legends, together at last. Bugatti is driving the Bugatti Divo around Sicily’s historic race circuit. Joining the Divo is a Type 35, the most successful racing car of all time. This marks a very special kind of meeting. Between 1925 and 1929, Bugatti and the Type 35 dominated the long-distance race on Sicily. And in 1928 and 1929, one driver in particular demonstrated what he was capable of: Albert Divo.

Bugatti has designed and developed a hyper sports car in his honour, limiting production to just 40 units. Highly customised, high-performance and exclusive. “The Divo already marks a milestone in Bugatti’s more than 110-year history,” says Stephan Winkelmann, President of Bugatti. “By starting delivery of the Divo, Bugatti is beginning a new era in modern coach-building. It is a customised masterpiece of automotive craftsmanship, a legend of the future.”

With the voluntary restriction of the maximum speed limit to 380 km/h, the engineers have generated additional downforce, which increases agility and lateral dynamics. The result of this work is a model that is unique in terms of technology and aesthetics. The NACA Duct air intake featuring the central fin on the roof provides the 8.0-litre W16 engine generating 1,500 PS with its intake air and improves the flow of air. It guides the air towards the 1.83-metre-wide rear spoiler in a targeted manner and minimises turbulence. Thanks to sleeker lines, additional air intakes, a reduced front section, a narrow front spoiler, flatter LED headlights and complex 3D rear lights, the Divo has a minimalist, dynamic appearance. The first Divo models, which cost 5 million euros each, recently arrived with their owners. All 40 units are due to be delivered to their customers by the end of the first quarter of 2021.

The Bugatti Type 35 is a racing car with pedigree and, like its new successor, a technical masterpiece: Bugatti used a crankshaft supported by two roller bearings and three ball bearings for the first time in the early 1920s – and this crankshaft was regarded as a feat of engineering. It could run at speeds of up to 6,000 rpm to power the eight pistons in the engine, which started out with a capacity of 2.0 litres. Two carburettors supplied the eight-cylinder engine with plenty of fuel; it achieved an output of around 95 PS, which was transmitted by a wet multi-plate clutch. The first Type 35 models drove at over 190 km/h, while later Type 35 B vehicles with the 2.3-litre eight-cylinder model achieved up to 140 PS thanks to a compressor. As a result, they could reach speeds beyond 215 km/h. As well as their powerful output, the engines impressed with their reliability and durability – the ideal conditions for endurance races, like the Targa Florio in the late 1920s.

A good 90 years later and Andy Wallace is sitting behind the wheel of the Type 35 and working on the steering wheel. Tight corners, steep slopes and dusty tracks. The route places a few demands on the official Bugatti pilot, racing driver and Le Mans champion. “It’s incredible what racing drivers like Albert Divo managed to achieve back then. And even though the Type 35 is easy to drive for its age, it is still a constant muscle workout. There are lots of corners, all of them tight, the route is unclear and the condition of the tarmac is very poor. It’s impossible to overtake,” says Wallace. The Brit is familiar with fast cars. He has been driving and testing Bugatti cars since 2011; he spent 33 years behind the wheel as a racing driver, winning famous endurance races like the 24-hour races in Le Mans, Daytona and the Sebring 12-hours.

Designed to be agile on corners, the Divo feels at home on the historic circuit of Targa Florio. “I am deeply impressed by how the Divo – which is designed for much higher speeds thanks to its dynamic features – is able to get to grips with these roads, some of which are in very poor condition, and the very short distances between corners. The steering, springs, shock absorbers, control systems, gearbox and brakes respond to every command with directness and precision. Even after big bumps in the road, the dampers quickly absorb the energy, meaning the Divo never loses contact with the road – an impressive feat by the engineers,” says Andy Wallace.

In the 20th century, the Targa Florio in Sicily was considered one of the most prestigious but also one of the hardest and most dangerous endurance races in the world. The first race was held in 1906 with international racing drivers taking to the streets owned by the Sicilian business family Florio – which is where the name comes from. It did not take long until all major sports car manufacturers were taking part. Winning here meant that you had automatic proof of your speed and reliability – a good reason to buy any car.

Initially, one lap of the “Piccolo circuito delle Madonie” was around 148 kilometres, which was reduced to around 108 kilometres in 1919. The route ran anti-clockwise and contained around 1,400 corners. Five laps equated to 540 kilometres – on public, bumpy and dusty mountain roads. The Targa Florio remained a dangerous route in every race and you had to be truly skilled behind the wheel to conquer it. Teams were able to refuel and change tyres at any point on the track, though nominated substitute drivers could only step in at the end of a lap and in the presence of one of the race directors.

In 1925, race director and driver Meo Constantini won in a Bugatti Type 35 for the first time, repeating his victory one year later. In 1927, Emilio Materassi won in a Type 35 C, while Albert Divo won the endurance race in a Type 35 in 1928 and again one year later. And with his second victory, he also set a new record: an automobile manufacturer had never achieved five consecutive wins in the endurance race before. A feat that was never repeated again until the end of the last official race in 1977.

The former route of the “Piccolo circuito delle Madonie” passes along the historic pit lane in Floriopoli through Cerda in the west. The original circuit runs through the southern town of Caltavuturo at 500 metres above sea level and back down into the valley before tackling high mountain roads through Collesano and back down to Campofelice di Roccella. The next few kilometres run along the Mediterranean back towards Cerda. “It feels incredible to be here on the legendary Targa Florio circuit with the historic racing car from the Florio era, the Bugatti Type 35, and the new Divo. It feels like the circle is complete for me,” says Andy Wallace.

Albert Eugène Diwo, who did not change his name to Divo until later (the Italian word for “star”), is not only the eponym of Bugatti’s latest creation, he was also an exceptional talent. Born in France on 24 January 1895, his interest in technology started at a young age and he started training as a ship mechanic at the age of just 13. He quickly got to grips with technically complex systems and managed to improve them. In the early 20th century, the early stages of aviation piqued his interest. During World War One, he defended his country as a fighter pilot and improved the machinery on the ground.

Now in love with speed and technology, Divo began to look for replacement vehicles during peacetime. In 1919, he found his replacement in racing cars. Divo quickly demonstrated his talent in fast cars, too. He started out at Sunbeam and Talbot-Darracq, winning the Spanish Grand Prix in Sitges in 1923 before switching to Delage one year later and achieving further success. In 1928, he moved to Bugatti and changed his name to Divo. In the same year, he won the Targa Florio in a Type 35, a feat that he repeated one year later. He won many races, including six Grands Prix, over a period of 20 years. He stayed with Bugatti until 1933, continuing to work as a driver and developer. Even after the Second World War, Divo remained closely linked to motorsports as a race director for an oil producer. Albert Divo died in France in 1966.

In 2018, Bugatti announced that it would be naming the new Bugatti Divo in honour of the racing driver. A tribute to his performance on behalf of the French brand – including his feats at the legendary Targa Florio.