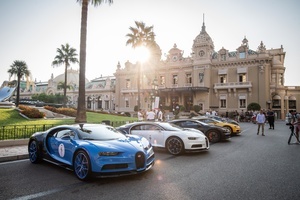 Bugatti President Winkelmann Says Brand has Surprises in Store for 2020

Bugatti achieved a lot in the past year, with the hyper sports car manufacturer celebrating several outstanding models, a world record and celebrating the brand’s 110th anniversary in style. The anniversary made Bugatti one of the oldest marques manufacturing such supercars. The company also marked this anniversary year with several exclusive Edition models.

Commenting on these achievements last year, Stephan Winkelmann, President of Bugatti said that Bugatti had designed some outstanding hyper sports cars in 2019. They included the Chiron “110 ans Bugatti” which was made to pay homage to the brand’s French homeland, the “La Voiture Noire” reminiscent of the most exclusive, beautiful and valuable Gran Tourismo for Bugatti enthusiasts there is. “La Voiture Noire” represents the equivalent of haute couture for automotive engineering with its elegant design, powerful performance and unique appearance. Bugatti also marked its Italian connection with the “Centodieci”, which also pays homage to Bugatti EB110, the super sports car of the 1990s.

From the time it was established, Bugatti has stood for superlatives and is known for the performance of its models in addition to the luxury, quality and elegance they offer to users. To ramp up the performance factor, in August 2019, a new derivative of the Bugatti Chiron became the first hyper sports car to break the magical 300 miles per hour speed barrier by travelling at 304.773 mph (490.484 km/h), a world record that was set by the new Chiron Super Sport 300+1. “An extraordinary feat of engineering. Bugatti has once again shown what our employees are capable of. Never before has a series manufacturer achieved this high speed,” said Stephan Winkelmann.

The summer of 2019 also witnessed a “Grand Tour” organized by Bugatti. As part of the tour,  Bugatti customers drawn from different parts of the world visited various stations in the life of Ettore Bugatti. They did so while making up the largest convoy of modern Bugatti hyper sports cars ever seen, comprising 25 Veyrons and Chirons, before finally meeting up with other customers as well as hundreds of Bugatti fans and employees for the “Grande Fête” held in front of the Château in Molsheim. Winkelmann called the event an incredibly beautiful and emotional one as it featured lot of historical and current Bugatti models..

He said that though the company was proud of its glorious past, it also had ambitious plans for the future. In 2019, Bugatti was able to increase its production and also deliver more customized Chiron vehicles to its customers. In 2020, Bugatti plans to make the first Divo model, a hyper sports car that is specially designed for lateral acceleration. With the Divo, Bugatti is reinforcing its longstanding tradition of coachbuilding, which translates to making specially designed bodies for use on an existing chassis. This concept has drawn great interest. The small series, which is limited to just 40 cars, has been sold out even before it makes its debut on the world stage. Bugatti plans to continue the production of the Chiron right through to the end of 2021, and as of now, less than 100 of the 500 hyper sports cars are still available.

The ultimate Bugatti hyper sports cars continue to retain the reputation of being the most potent, high quality and luxurious vehicles in the world, being painstakingly built by hand over many weeks and with meticulous attention to detail. The iconic 8.0-litre W16 with up to 1,600 PS remains the very epitome of engineering. Besides its incredible performance, this hyper sports car is easy to drive and also offers exceptional luxury, comfort and individuality.

Stephan Winkelmann promised further highlights in the model series for 2020, saying Bugatti would present further high-performance vehicles in 2020, thus remaining true to its philosophy of developing the best cars in the world. On the sustainability front, Bugatti plans to retroactively make its locations worldwide and the kilometers driven by Bugatti vehicles CO2-neutral from 2018. This includes test drives, as well as all the kilometers driven by customer vehicles. “By doing this, we’re taking responsibility for generations to come and placing Bugatti in a sustainable position for the future,” said Stephan Winkelmann.

Winkelmann however refused to divulge further details of its plans for 2020 choosing to say instead that the brand plans to present a few interesting surprises in 2020. He concluded by saying that Bugatti would always strive to search for aesthetic technology and perfection, very much in the spirit of Ettore Bugatti himself.