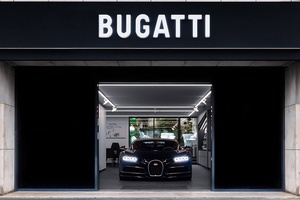 Bugatti has opened a new showroom in Paris and it is the first in the French capital to feature the brand’s new corporate design. In Paris, the brand’s partner is the Groupe Schumacher, a company which has been in the automotive business from 1947, and has specialized in super and hyper sports cars. The new showroom in Neuilly-sur-Seine was formally inaugurated by Stephan Winkelmann, President of Bugatti, and Edouard Schumacher, CEO of Groupe Schumacher and co-founder of LS Group in a function that was attended by customers and media representatives. With the opening of this new showroom in Paris, Bugatti now has a distribution network comprising 36 dealers in 17 countries.

Stephan Winkelmann explained that the exclusivity of Bugatti’s partner network and the high standards that Bugatti sets for everyone makes it important for the brand to maintain a very strategic approach. Hence, Bugatti operates only very select markets and is works only with the right partners.
Winkelmann said, “Not only for us as a French manufacturer, Paris is a key market. It is the main hub for all national happenings and decisions in France. And we are absolutely confident that Groupe Schumacher is the right partner.”

Edouard Schumacher said that it was a real honor for his company to have been chosen by Bugatti to represent the iconic brand. He said they were particularly happy to be the first dealership in the world to present the new Bugatti visual identity. Groupe Schumacher had recently merged with Groupe Lamirault to build the LS Group as part of its diversification strategy in luxury brands, of which Bugatti is the flagship.

The new Bugatti showroom is in Neuilly-sur-Seine, at 181 Avenue Achille Peretti. The showroom is on the ground floor of the building so that it offers high visibility from the street for customers, and car enthusiasts. Those who pass by the showroom can easily see a Chiron Sport in visible full blue carbon. Every detail of the new facility aligns with the new Bugatti corporate design while offering modern, technical, and yet cozy ambience. These details include the white Bugatti lettering outside, the homely furniture that contrasts sharply with contrasting with the fair-faced concrete inside, and the big state-of-the-art power wall for customer configurations.
Just as in the case of the hyper sports cars that Bugatti produces, the showroom also relied on manual craftsmanship rather than industrial production. Just like the Bugatti Atelier and Château in Molsheim are surrounded by trees and wildlife and fallow deer, the Paris showroom also has a lounge area that extends into into an idyllic garden. “We envisioned a place where, in absolute discretion and confidentiality, we would be able to welcome our clients and give them a tailored service. A place in Paris where time stops”, concluded Edouard Schumacher.

The new Paris showroom marks Bugatti’s return to Paris. Nearly a century ago, Bugatti’s founder Ettore established the first Bugatti showroom in the Avenue Montaigne. Though Ettore had opted for Molsheim in Alsace in 1909 as the location for his headquarters and production site, he was very attracted to Paris, the capital of the intellectual Avant-garde. Paris was the city where that was home to some of his best clients or where they at least conducted business. Ettore spent an important part of his professional and private life in the French capital. With the establishment of the new showroom, the spirit of Ettore Bugatti will live on in Neuilly-sur-Seine.