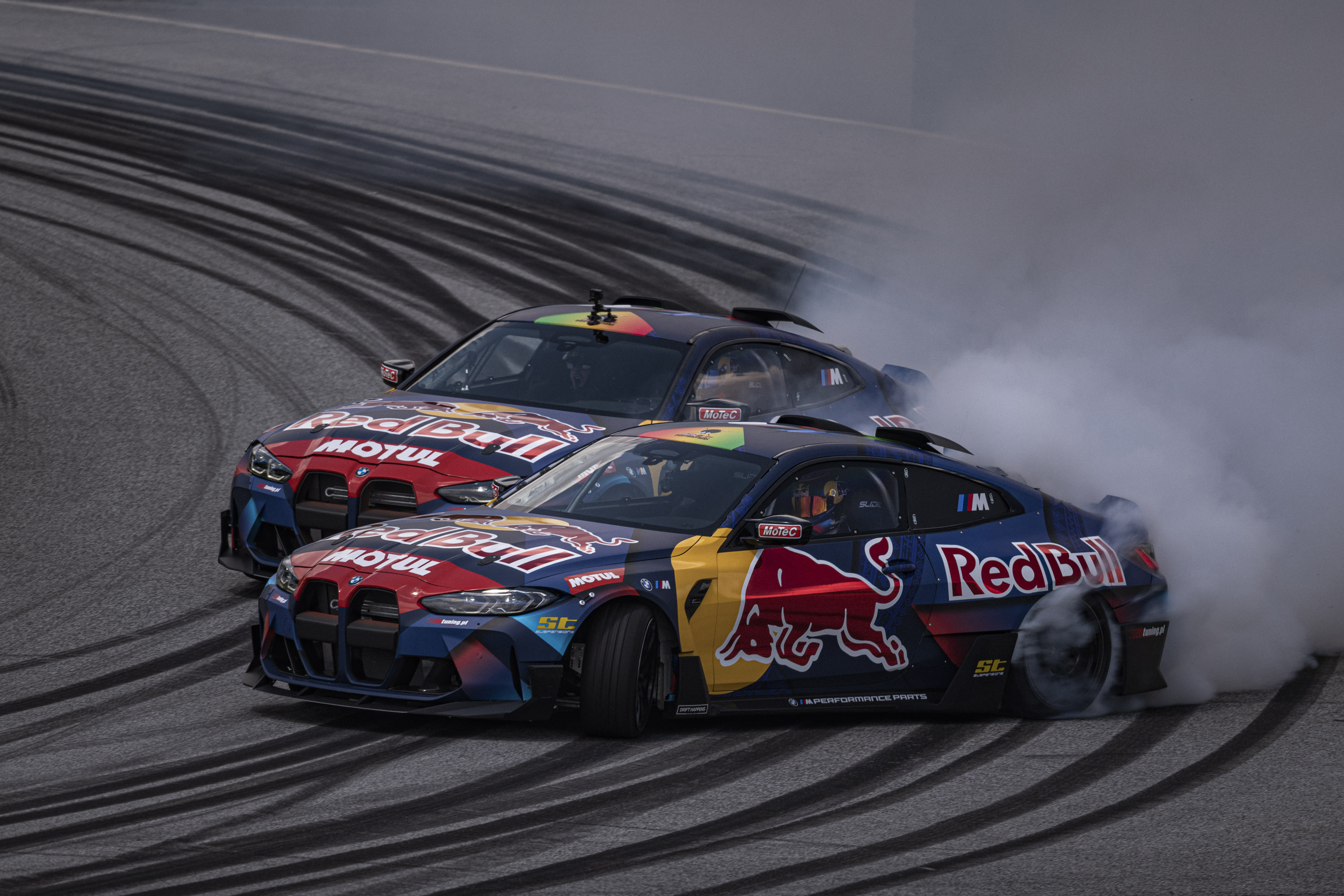 Let’s drift! The two new BMW M4 Competition models (combined fuel consumption: 10.2 – 9.9 l/100 km according to WLTP; combined CO2 emissions: 233 – 227 g/km according to WLTP) being driven by the Red Bull Driftbrothers are now ready for the racetrack. Backed by the BMW M GmbH, the brothers Elias Hountondji (35) and Johannes Hountondji (40) have completed the conversion and preparation of their new vehicles for the 2021 season of the Drift Masters European Championship. On 10 and 11 July during the season start of the series in Greinbach (AUT), the Driftbrothers will be taking the BMW M4 Competition to the starting grid for the very first time.

“I am deeply impressed with what the Red Bull Driftbrothers have managed to coax out of our vehicles and wish both of them every success for the start of the season. The result also shows how good a basis the BMW M4 Competition provides for motorsport use. From the start of its development, we had designed the production vehicle to also form the basis for our GT icon, the BMW M4 GT3, which we officially presented during the 24-hour race at the Nürburgring almost two weeks ago,” says Markus Flasch, CEO of the BMW M GmbH.

Elias and Johannes Hountondji have modified both BMW M4 Competition models comprehensively in order to adapt them to the special demands of drifting. They doubled the peak performance of the straight six-cylinder power unit of the BMW M4 Competition to 1,050 hp and increased maximum torque to almost 1,300 Nm, this being absolutely crucial for drifting. Elias Hountondji speaks with admiration for the production engine’s massive potential. “It is by nature a genuine racing engine in a road-legal car, so to speak. When you look at each component of this engine, it is clear that many engineers have put a lot of thought into creating an optimal design,” the younger of the two Driftbrothers says. In order to achieve the massive increase in performance, the two brothers installed, among other things, a special, particularly efficient cooling circuit along with an additional second cooler at the rear.

Moreover, the aerodynamics were extensively modified and optimised for drifting. Besides benefitting from their own experience, the Driftbrothers also relied on the expertise of BMW design experts. Virtually all newly designed aerodynamics components were manufactured exclusively at BMW M Prototype Construction. “It was a great honour for us to collaborate with experts from the design and prototype construction departments. With their help we were able to implement our ideas perfectly,” says Johannes Hountondji.

For example, the Driftbrothers’ BMW M4 Competition was fitted with a new BMW kidney grille to optimise the supply of air to the engine compartment.

Furthermore, carbon was used to produce a new spoiler lip (gurney) for the tailgate, side coverings for the rear diffuser and attachments for the side sills from the M Performance Parts portfolio. These were complemented by so-called winglets, which optimise airflow at the front splitter and behind the front wheels as well as in front of the rear wheels. Should the need arise during the course of the season, the production of an air scoop for the bonnet would also be possible.

Following the season start in Austria, the Red Bull Driftbrothers will be competing in a further three rounds of the Drift Masters European Championship, the world’s leading drift series. The second and the third round will be held in Riga (LAT) on 30/31 August, the season finale in Tiflis (GEO) on 4/5 October.

The Red Bull Driftbrothers have participated in the Drift Masters European Championship since 2018. The 45 best drivers from Europe, the USA and the Middle East compete in this invitation series. For some years now, Elias and Johannes Hountondji have ranked among the top drivers in the drifting scene and were, among other successes, 2017 King of Europe champion and vice champion. In 2016 and 2017, they also seized the team title there. Moreover, this year, the brothers will be making guest appearances during the MotoGP race at the Sachsenring (GER) and the Red Bull Ring (AUT), as well as during the Austrian Formula 1 Grand Prix, likewise at the Red Bull Ring.

The fuel consumption, CO2 emissions, electric power consumption and electric range figures are determined according to the European Regulation (EC) 715/2007 in the version applicable. They refer to vehicles in the German market. Where a range is shown, NEDC figures consider the different sizes of the selected wheels/tyres, while WLTP figures take into account the impact of any optional extras.

All values were calculated based on the new WLTP test cycle. Any NEDC values that are shown have been translated into equivalent NEDC measurements where appropriate. WLTP values are taken as the basis for determining vehicle-related taxes or other duties based (at least inter alia) on CO2 emissions as well as eligibility for any applicable vehicle-specific subsidies. Further information on the WLTP and NEDC measurement procedures can also be found at www.bmw.de/wltp. Further information on official fuel consumption figures and specific CO2 emission values of new passenger cars is included in the following guideline: ‘Leitfaden über den Kraftstoffverbrauch, die CO2 emissions and den Stromverbrauch neuer Personenkraftwagen’ (Guide to the fuel economy, CO2 emissions and electric power consumption of new passenger cars), which can be obtained free of charge from all dealerships, from Deutsche Automobil Treuhand GmbH (DAT), Hellmuth-Hirth-Str. 1, 73760 Ostfildern-Scharnhausen and at https://www.dat.de/co2/.