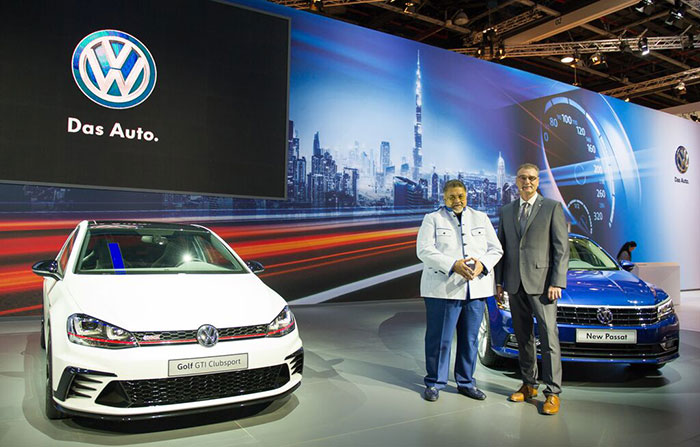 Volkswagen presented a wide range of cars at the 2015 edition of the Dubai International Motor Show, including a concept car named the Golf GTI Clubsport concept car to commemorate the 40th anniversary of the Golf GTI next year, the iconic Beetle Cabriolet and the family vehicle, the new 2016 Passat.

Commenting on the models which took centerstage at the show, Thomas Milz, Managing Director, Volkswagen Middle East said that this year the focus was on presenting cars for all types of customers. The anniversary edition of the GTI – the Golf GTI Clubsport – is scheduled to arrive in the region in early 2016 to celebrate four decades of the stylish hot hatch. The GTI Clubsport will be its most powerful production version ever and has been thoroughly revamped both externally and internally.

The new version of the Passat which is the mainstay of the company’s sales in the Middle East has the perfect blend of style, safety, technology and innovation. The Beetle Cabriolet made its debut and retains the classic style of the Beetle while adding new elements for fun and comfort and performance.

The car that is a true pathbreaker in the sporty compact segment, the Golf GTI will be marking 40 years on the roads next year. VW customers who love the model can get its anniversary edition, the Golf GTI Clubsport which has been redesigned from scratch for better power, aerodynamics and comfort. It has significantly higher power output and better downforce. Stylistically, the classic black stripe has been relocated to the side from its previous position between the front and rear wheel arches.

The 2016 Passat comes with a funkier design and more innovative technical and safety features like a zoom friendly touchscreen and amplified sensors. The exterior is more refined with a domed hood, front fenders, a four-bar grille, changes to the front and rear bumpers, and the availability of slimmer LED headlights and taillights.

The interiors too have been extensively upgraded for better comfort and feature a piano black trim. The latest model will be available in four configurations – S, SE, SEL and Sport.

The Beetle Cabriolet retains the best elements of the classic Beetle and has an automated soft-top hood, which takes only 9.5 seconds to close, even when the vehicle is going at 50 km/h.

One of the most notable features of the new Beetle Cabriolet is the incredible space inside including ample space for luggage with a boot capacity of 225 liters. The powerful Fender sound system has 400 watts of pure power, a digital 10-channel amplifier, nine speakers and a subwoofer to produce sound of outstanding quality. The Beetle Cabriolet will be available in three trim levels – SE, SEL and Exclusive,

across Volkswagen dealerships in the Middle East from December 2015.