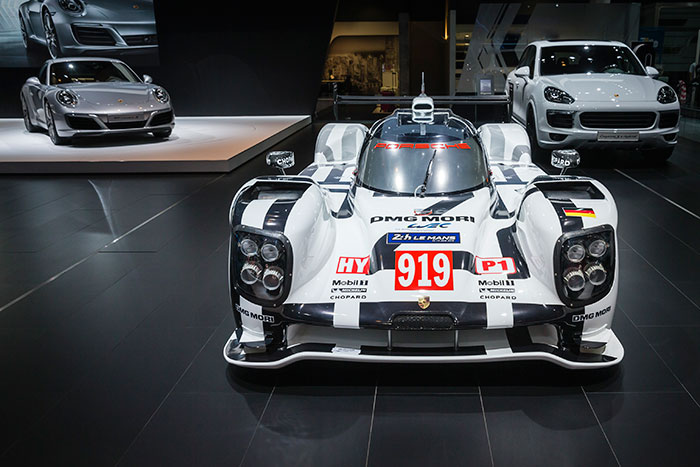 Porsche focused on its reputation for excellence and technological innovation at the Dubai International Motor Show (DIMS) by showcasing its pioneering models like the Porsche 911, and the track to road version of the iconic 919 Hybrid. The fair also witnessed the launch of the new Porsche 911 Carrera in the Middle East.

The 911 has been one of the company’s all time bestsellers with almost 900,000 units being sold on a global basis and an unmatched legacy both in motorsports and on the road. Fitted with new turbo engines to enhance performance, the Middle East debut highlighted the model’s increase in performance, driving pleasure and efficiency. The exterior too has been revamped including a redesigned rear lid with vertical louvres and distinctive rear lights. The most notable new features were the four point daytime front running lights and the updated Porsche Communication Management (PCM) system with a multi-touch display thus emphasizing the brand’s focus on technical innovation.

Deesch Papke, Chief Executive Officer of Porsche Middle East and Africa FZE said that Porsche is fully committed to making the sports car of the future. The company is making a break with tradition with the launch of the new 911 as it is using the Porsche turbo technology in all the Carrera models. In the 911 Carrera, the new biturbo engine produces 320 hp while it ramps up the 911 Carrera S to 420 hp. This translates into higher power, better torque, faster acceleration and a higher top speed. Another notable achievement is a marked reduction in fuel consumption by about 12 per cent as compared to the previous generation.”

Papke added that the enhanced Porsche Communication Management system including voice control and an online navigation mode will be available as a standard feature in the new 911 Carrera model. It can be operated with multi-touch gestures and has a seven-inch display, just like a smartphone. The ease of operation makes it possible for the driver to focus more on the road. The new 911 is not only a state of the art model but is well ahead of its time in many ways.

At the Dubai International Motor Show, Porsche showcased its expertise in technology transfer from the track to the road with the 919 Hybrid model. With its lightweight design, and outstanding efficiency, it showed Porsche’s capability in taking race-winning developments to their road legal models. The 919 Hybrid one-two finish at the 24 Hours of Le Mans race in June 2015 was the ultimate proof test of the model’s potential. This was further buttressed by Porsche’s victory in the 2015 FIA World Endurance Manufacturer’s Championship where Porsche emerged as the winner with one round to spare.

The new 911 model continues its reign as the top performer in its segment. The Carrera S model thrilled visitors to the motor show with the potential to complete a lap on the North Loop of the Nürburgring ten seconds faster than its predecessor and a top speed of 308 km/h. Notable features of the model include innovative turbo flat engines, an advanced chassis specifically developed for optimum performance and a ground-breaking infotainment system and the legendary model continues to be the top model when it comes to driving pleasure, performance, and efficiency. All models across the range benefit from an additional 20hp, efficiency improvements of up to 12 percent.