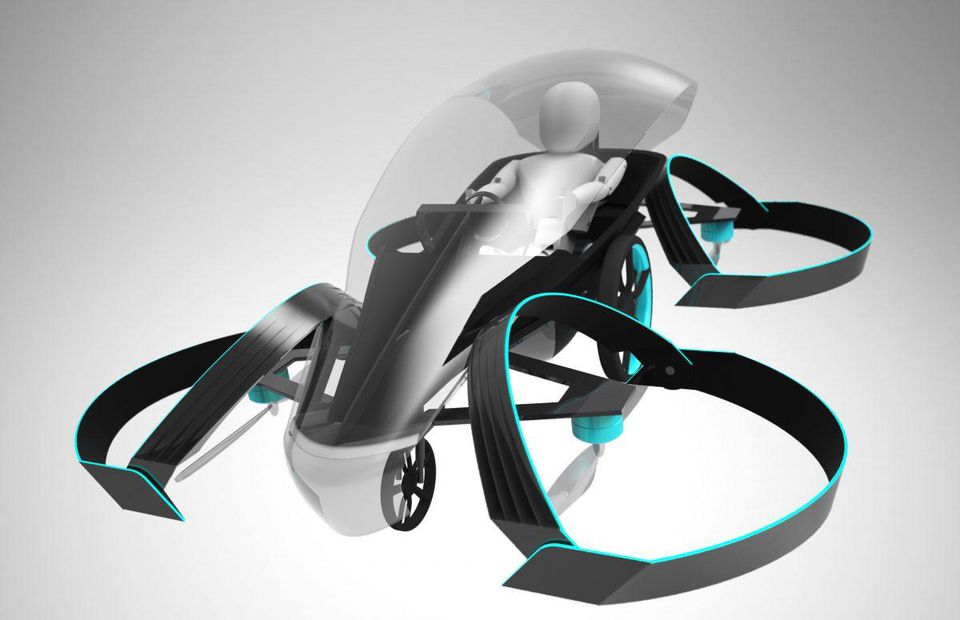 Toyota has filed a patent for a flying car design that uses the same drive mechanism for road and the air. Called “Dual Mode Vehicle With Wheel Rotors”, the technology uses the rotor hubs as wheels when the device is on the ground. The rotors are folded into the wheel thus allowing the vehicle to roll freely. Steering and braking is done through application of differential power to the individual wheel rotors, which would be fixed in a single position on the ground. Previously, Toyota has revealed that it would be involved in funding an ambitious flying car project for the 2020 Tokyo Olympics. The leading car companies in Japan are planning to use the Olympics in Japan to showcase their latest technological innovations. Both Nissan and Toyota are currently working on the development of autonomous vehicles which will be used to transport athletes between the Olympic village where they would be staying and different sporting venues around Tokyo Bay. Another vehicle that Toyota would be working on would be a retro-styled taxi inspired by London cabs that is set to be launched in 2020.

Toyota would be funding the flying car which would be called the Skydrive and will light the Olympic flame in Tokyo.

Skydrive was first conceptualized in 2012 when Cartivator, a large group of about 30 designers led by Tsubasa Nakamura emerged as the winners of a contest with their initial design for a flying car.

In order to raise funds and to make their dream a reality, Cartivator asked for assistance from people like Masafumi Miwa, a renowned drone expert and associate professor of mechanical engineering at Tokushima University, and Taizo Son, who set up GungHo Online Entertainment, a Japanese online video game developer.

The entire project required an investment of about USD 370,000 (4.2 million yen) nad Toyota and its group of companies, has decided to support Cartivator’s Skydrive project. According to the company’s chairman, Takeshi Uchiyamada, Toyota’s decision to sponsor the project was based on the thinking that there would be no progress at all if the company waited to provide the only when the technology was ready.

This is not the first such “flying car”. Many other companies including startups and even aircraft manufacturers have ventured into the field. These include the 3-wheeler PAL-V ONE vehicle made in the Netherlands, the stylish 2-passenger Slovakian-built Aeromobil 3.0, the street-legal airplane Terrafugia Transition which was made in the US and the Chinese-made Ehang 184 autonomous aerial vehicle. Airbus also has divulged plans to conduct test flights of a flying car this year, while Uber Technologies had announced that it aims to launch flying taxi services within a few years.

Cartivator’s plan is to further refine the Skydrive concept and develop a prototype of the Skydrive for a manned test flight by the end of 2018, with the idea being that a production model will be ready by 2020 to ignite the Olympic flame in 2020.

Commenting on the timeline, Ryutaro Mori, Cartivator’s business director said that the idea was to emulate and improve on the method that was used to light the Olympic flame at the Atlanta 1996 Olympics. If the company’s plans pan out, it would commercialize the flying car directly after the Olympics.

The Skydrive will have the capacity to hover at less than three feet (one metre) off the ground and will use vertical take-off and landing technology. Hence, it will not need roads or runways. It would be using technology that is commonly found in drones, including the use of four rotor blades. The direction of travel can be manipulated by varying the speed of each rotor.

There are many safety concerns that need to be addressed. Just as in the case of all emerging technologies like autonomous vehicles and hydrogen-fueled vehicles, there should be a legal framework for the standardization of such vehicles and aerial traffic r