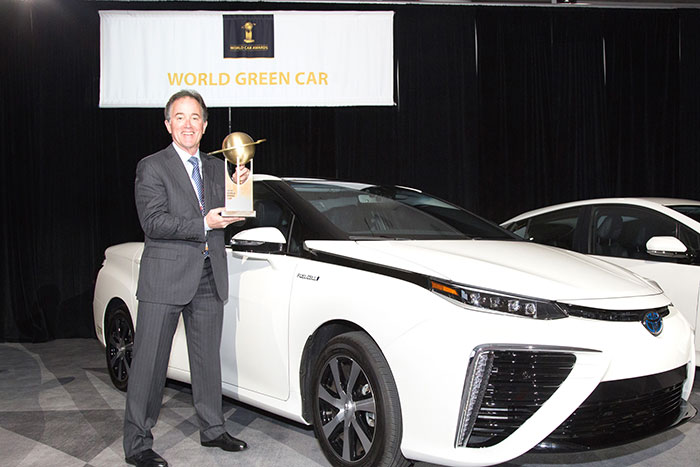 At the New York International Auto Show which concluded recently, the Toyota Mirai emerged as the winner of the 2016 World Green Car award. The model won the award on the basis of its fuel consumption, tailpipe emissions, and its use advanced power plant technology for minimizing the car’s impact on the environment. The Mirai faced stiff competition in this category from seven other models which debuted this year on a global basis.

Commenting on the award, Bill Fay, Group Vice President and General Manager, Toyota pision said that just like Toyota’s Prius made a major impact on the automotive scene two decades ago, the hydrogen-powered Mirai is all set to make history. The model has definitely set new benchmarks in its segment with its range of over 500 km per tank, a refueling time of under five minutes and emissions that consist only of water vapour.

According to Takayuki Yoshitsugu, Chief Representative, Middle East and North Africa Representative Office, Toyota Motor Corporation the award recognized Toyota as one of the pioneers in hybrid technology. With the Mirai, Toyota was aiming to make a real difference for for future generations by using hydrogen fuel-cell technology to minimize the impact of harmful emissions. He went on to laud the support of Toyota’s customers who have responded favourably to the Mirai and Toyota’s future direction in terms of environmentally-friendly vehicles.

The winning entries for the World Car Awards were voted on and selected by a highly expert international panel of judges consisting of 73 top-level automotive journalists drawn from 23 countries around the world.