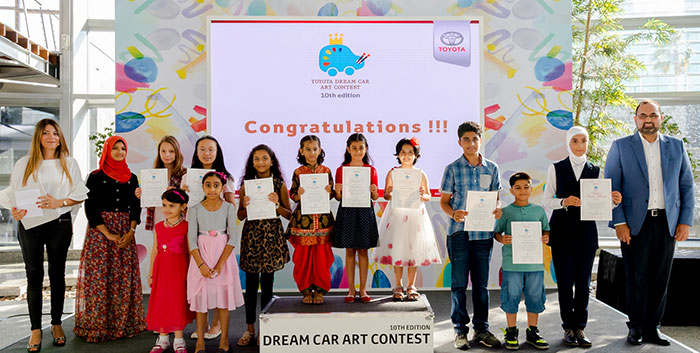 The Toyota Dream Car Art Contest which is held by the company’s sole distributor in the UAE, Al-Futtaim Motors, drew double the response in its second edition, when compared to last year. The global initiative is meant to inspire creativity in youth and make them develop an interest in transforming the world into a better place.

Al-Futtaim Motors held special art exhibition and awards ceremony at the Toyota Dubai Festival City showroom to reward top national winners and those who were shortlisted for the global contest with Gold, Silver and Bronze Prizes.

“Last year’s competition was impressive in its own right, with over 1,000 entries in the inaugural competition also resulting in a global award,” said Saud Abbasi, Managing Director of Toyota at Al-Futtaim Motors.

He added that they were highly impressed this time round not only with the turnout but also with the quality of the artwork that was received. The topics covered through the artwork revealed that the young contestants were highly aware about current issues that affected the world we live in, whether it is depending too much on smart devices, the need for humanitarian aid or environmental issues.

Children who have been selected for the final leg of the contest which will be held in Tokyo will be eligible to make a trip there with their parents to participate in the awards ceremony which will be held in August 2016. They will also get a chance to visit a Toyota factory and experience different aspects of Japanese culture.

Last year, 875,000 entries from approximately 81 countries and regions around the globe were submitted to the Toyota Dream Car Art Contest worldwide.

Selected entries will be displayed in a wide range of Toyota facilities in the UAE, allowing a wider audience to appreciate the creative abilities of the children who participated in the contest. The winners received art and technology related prizes worth around AED 35,000 in total.

An additional People’s Choice Award was voted on by the audience and went to 14 year old Ranim Osama Kasasbeh. The 9 winners, along with three distinguished artworks submitted by Gargi Sachin Giripunje, Pratheeksha Menon and Afreen Nizam Rasheed will be combined in the Al-Futtaim Motors 2017 calendars which will include high quality reproductions of all 12 entries, celebrating the young talent representing the UAE at the global Toyota Dream Car Art Contest.