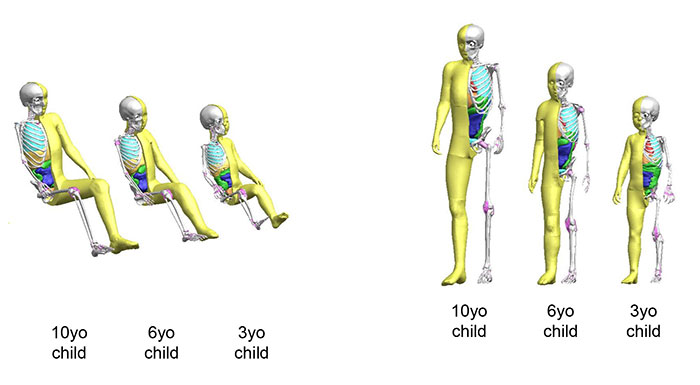 As part of a move to develop safer vehicles, Toyota has added child models to its Total Human Model for Safety (THUMS) virtual crash dummy software. This will facilitate more perse tests and thus minimize traffic fatalities and injuries. Three child models to represent children aged ten, six and three have been added to the fourth version of the software. THUMS can be used for computer simulation of injuries sustained by human bodies during vehicle crashes and plays a crucial role in the development of devices for passenger protection like airbags.

The software is also being used in motorsports. Recently, NASCAR (the National Association for Stock Car Auto Racing) in the US used THUMS to analyze high-speed impacts and design seats with better structure to reduce the incidence of rib fractures that drivers get due to involvement in racing accidents.

Currently, the THUMS range comprises models of a large male (189cm tall), an adult male with average build (179cm tall), and a small female (153cm tall). The ten-year old (138cm tall), six-year old (118cm tall) and three-year old (94cm tall) models which will be added to THUMS Version 4 have dimensions similar to those average children of the respective age. As in the case of the other models, the new child size models will come in two versions―a passenger version and a pedestrian version―thus increasing the number of models in the range by six. This broadening of the range of models also takes into account the differences in age and physique of the occupants of a car and makes injury analysis a more comprehensive process.

“Toyota since its founding has been committed to producing vehicles that are safe and provide peace of mind,” said Takayuki Yoshitsugu, Chief Representative, Middle East and North Africa Representative Office, Toyota Motor Corporation. He went on to say that the new child models will prove to be highly valuable in the development of safer vehicles. Toyota’s safety related activities have always involved three elements: educational activities regarding traffic safety, development of safe motor vehicles, and participation in traffic-environment development.”

He added that Toyota will continue to use THUMS analysis for better analysis of internal injuries caused by automobile collisions, and will use the results to develop various improved safety features.

Another distinctive aspect of the latest THUMS Version 4 is that it includes detailed models of internal organs enabling analysis of injuries to a wider range of internal organs. Internal injuries account for at least half of all the injuries that are suffered during automobile collisions and these organs are particularly vulnerable in accidents.

THUMS is used for research purposes not just by Toyota but also by other automobile manufacturers, parts manufacturers, and universities both in Japan and overseas.

Toyota developed THUMS in 1997 in collaboration with Toyota Central R&D Labs, Inc. The first version was commercially launched in 2000, followed by Version 2 in 2003, in which a face and bones were added to the model. Version 3 was launched in 2008, and came with a precise brain model. Version 4, with detailed modelling of internal organs, was completed and released in 2010.