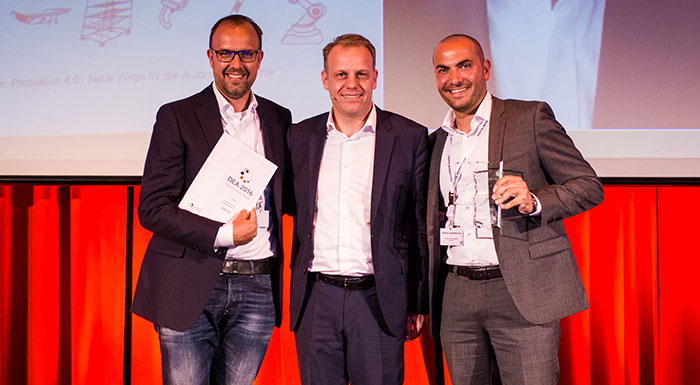 Audi has always been a frontrunner when it comes to adopting innovative technologies in order to stay competitive and create more synergies. The company has been exploring the frontiers of digitization and connectivity in its factories. Audi will shortly use a cloud‑based Internet of Things (IoT) platform that was developed by the Munich based startup, nextLAP to connect all IoT objects that are a part of the production process including tablets, robots and cordless screwdrivers.

Antoin Abou‑Haydar, Head of Vehicle Assembly Audi A4/A5/Q5, who received the Digital Economy award on behalf of AUDI AG said that through this strategy, the company will reach the next stage of digitization, as the platform can be used to store all the data related to production and logistics thus allowing the company to implement intricate production and logistics processes in a faster, more flexible and cost-effective manner.

One way Audi has done this is through the use of the so‑called Smart Shelf, an intelligent pick‑by‑light shelf that can be used by logistics employees to make parts like steering wheels, gear‑lever knobs and seat belts ready for assembly. The Smart Shelf is equipped with mini PCs and oversees the supply of the required parts right from sourcing them to the assembly stage. For example, if there is a change in the assembly speed at which a component has to be fitted, in the past it would have meant recalibrating the assembly line calling for a great deal of time and effort. Now this change can be implemented just by using a tablet, thanks to the Smart Shelf and the cloud‑based platform and the production process will not face any interruption.

The Digital Economy Award is being given for the first time this year by Initiative Deutschland Digital, an inter‑industry network for the digital transformation of the German economy. The award is given to recognize companies and organizations that use new business models and digital technologies to increase their efficiency and value creation. The members of the jury are drawn from different fields including science, business, and politics and all entries are carefully evaluated in the categories Customer Experience, Product and Service Innovation, Company 4.0 and Digitized Business Model.