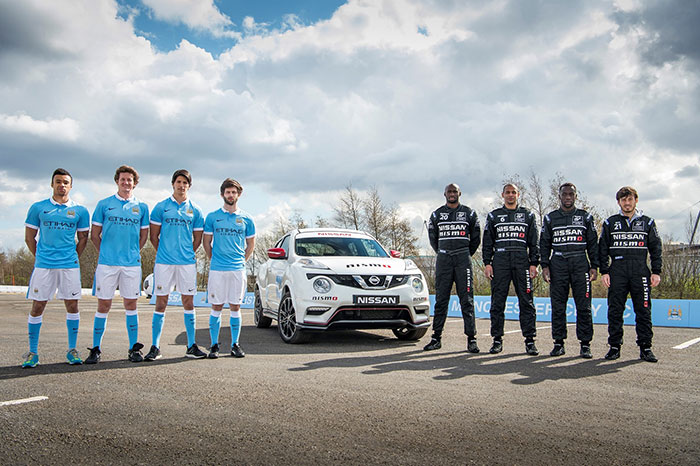 The top stars of the famous Manchester City football team got a chance to be racing drivers as part of Nissan’s ‘Dream Job Swap’. They swapped their football boots for racing suits and took to the tracks for a day.

Mentored by some of the best drivers from the Nissan GT Academy, David Silva, Bacary Sagna, Eliaquim Mangala and Fernando raced against each other in Nissan’s Juke NISMO RS, in an intense one-to-one race that tested all their car control skills.

The job swap idea was inspired by a study that Nissan commissioned of 1000 boys in the 9 to 13 age group. It found that as many as 22 per cent of nine to 13-year olds consider becoming a professional footballer the ultimate dream job. Racers too fared well when it came to career choices with as many as 64 per cent of the responders saying that they considered “learning to drive” as the most exciting future milestone. Racing came a close second to football in the dream job stakes, with 19 per cent of young boys calling it the most exciting job in the world.

Jean-Pierre Diernaz, Vice President for Marketing at Nissan Europe said: “Excitement is at the heart of everything we do at Nissan. We’re focused and committed to bringing innovation and excitement to everyone – be that football fans or budding racing drivers – by making advances in research, technology and engineering which are propelling Nissan towards a thrilling future.”

The video can be viewed here: https://youtu.be/bcHgs5V_3j8

Love for football and motorsports is not confined only to young boys. Nissan has also been studying what European adults find to be interesting in a survey that it conducted in partnership with sports science experts at Loughborough University. When it comes to the adults, football get a relatively high rating in the Nissan Excitement Index, which was the outcome of the survey Nissan commissioned in order to understand football excitement from a scientific perspective.

The Study surveyed more than 5,000 Europeans drawn from Spain, France, UK, Italy and Germany and over half of them (55%) said that football games excited them on a week-to-week or month-to-month basis. In fact, they all agreed that watching their favorite football club in action was more exciting than their current job. When asked to rate the two aspects of their lives they found most exciting, one in four (24%) chose their football club, compared to less than one in five (18%) who chose their current job.