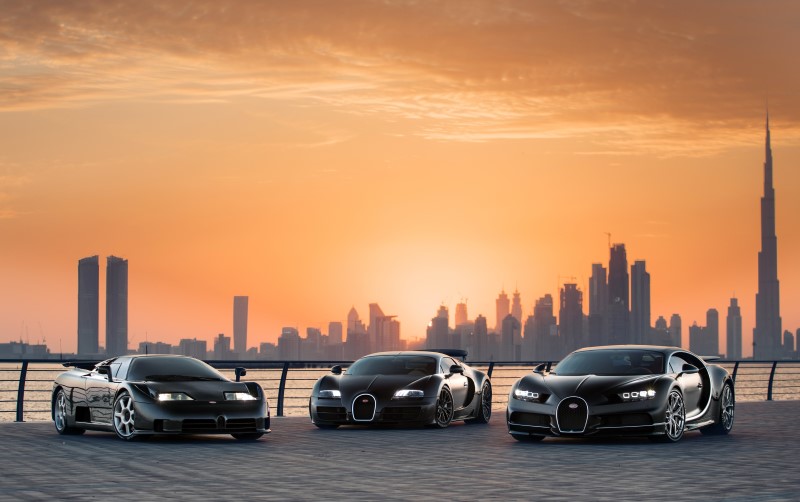 Three Bugatti Superstars Caught in One Photoshoot in Dubai

While Bugatti is known several special-editions, limited-editions, and bespoke one-offs, its three key models over the past 30 years have been the EB110, the Veyron and the Chiron. The EB110 was the super luxury car of the ’90s. The Veyron was its successor in the ’00s and early ’10s while the Chiron dominated the end of the ’10s right upto the present. Bugatti chooses to term the trio the “Holy Trinity” and recently brought all the three supercar models together for a photoshoot in Dubai.

The three cars were shot against a backdrop of sweeping sands and a spiky skyline dominated by the awe inspiring Burj Khalifa tower. The black EB110 was placed next to a black Veyron and a Chiron, inspiring awe in all onlookers. The sight of all three supercar models in plain black sans any of the colorful shades they have sported in the past highlighted their stylish looks.

Though there are 30 years between the EB110, and the Chiron, all the three Bugatti models share the same three key components: a carbon-fiber monocoque, four turbochargers, and all-wheel drive. The technologies used in these three main elements may have evolved over the years, but the basic premise of what makes a car a true super sports car has remained the same.

The Veyron was launched in 2005 model year and was powered by a highly powerful quad-turbo 8.0-liter W16 engine which had an impressive output of 987 horsepower (1,001 PS). With this added power, the time needed to go from zero-to-62-mph came down to 2.5 seconds, while the top speed increased to 253 mph. Even more powerful variants of the Veyron made their appearance in later years.

The current Bugatti model, the Chiron was launched in 2016 and in true Bugatti tradition packed a more powerful performance and higher speed. The Chiron carries on with a quad-turbo 8.0-liter W16, but it now makes 1,479 horsepower. It can go from 0 to 62 mph in 2.4 seconds, and in 2019, Bugatti used a Chiron to reach 304.773 mph, the fastest speed for a production car ever achieved.