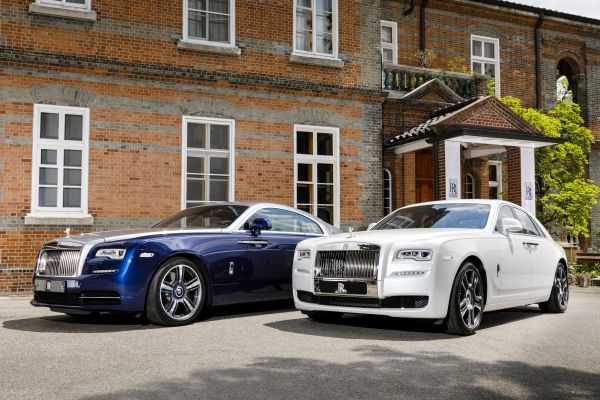 Rolls-Royce Motor Cars celebrated over ten years of a close relationship with South Korea by unveiling a ‘Bespoke Collection for Korea’ at the British Embassy in Seoul.

The Bespoke Collection is the first such collection for Rolls-Royce in south Korea and gives a contemporary interpretation to the aesthetic heritage of the country with the two cars in the collection paying homage to the country’s largest cities – Seoul and Busan.

The two customized cars are just as unique as the two cities they represent with a Rolls-Royce Ghost representing Seoul in the country’s national colors while a Grand Tourer Rolls-Royce Wraith highlights the leisure-orientated lifestyle of the coastal city of Busan. Rolls-Royce has had a showroom in Seoul from 2004 while it opened a second showroom in Busan in September 2016.

Both the cars are one-off creations made by Rolls-Royce expert designers and craftspeople at Rolls-Royce’s headquarters in Goodwood, England an dKorean customers can give their very own individual touches to the cars at the recently opened Rolls-Royce Motor Cars Studio in Incheon.

Giles Taylor, Director of Design, Rolls-Royce Motor Cars said that with this pair of bespoke cars, the brand has created individual, personal spaces along the lines of the cities they represent. The combination of intricate detailing and clean, elegant color schemes is highly appealing and many fine touches are only revealed by chance to the owner.
“It is with great pride that we introduce these glorious one-off vehicles,” added Paul Harris, Regional Director for Rolls-Royce Motor Cars Asia Pacific. “Korea is a passionate and dynamic country with which we share an appreciation for continually moving forward while respecting traditional craftsmanship. Our customers are leaders of industry and entertainment and we hope this will inspire their creativity in rewarding themselves with truly rare and individual vehicles.”

The Bespoke Collection has made its debut at a time when Rolls-Royce has proved to be successful in the Korean market. As of the end of April 2017, registrations of Rolls-Royce vehicles were up by 33 per cent when compared to the same period last year, thus highlighting the appeal of the  newly expanded model portfolio – the drophead coupé, Dawn, had joined the Phantom, Ghost and Wraith as the fourth model line in summer 2016.

The Ghost is in white and black and is set off by red and blue design elements, a color palette representing the colors of the Korean flag. While the exterior is in Andalusian White symbolizing purity and hope, there is  a hand-painted motif representing the iconic Namsan Seoul Tower above the twin coachline in Cobalto Blue and Mugello Red. These colors are also used to form pinstripes tracing the circumference of the wheel centres.

The interiors are just as dignified with a ‘Black tie with a twist’ theme. The seats are in black leather which is accented by contrasting Arctic White elements along with seat piping in the same Mugello Red and stitching in Cobalto Blue.

The seats are massage seats with perforated leather for air ventilation for maximum comfort. The headrest cushions are embroidered with ‘RR’ monograms and the car has the hallmark Rolls-Royce lambswool floormats. The Starlight Headliner, rear-seat theatre and Bespoke Audio system are other distinctive features of the vehicle. Customers will also enjoy the sleek Piano Black fascia inlayed in silver with the bespoke Seoul Tower motif, which is employed on the back of the rear seat picnic tables.

The Busan Edition is more evocative of the relaxed lifestyle in the coastal city of Busan. While the rear pillar motif created by the Goodwood design team for the Busan Wraith is inspired by both traditional and modern icons. It also sports a geometrical pattern inspired by the delicate latticework seen in traditional Korean hanok screen doors. This is also frequently used in the modern-day architecture of Busan, especially the effect created by the intersecting metal beams and glass panels of the skyscrapers of the posh residential area called the Marine City in the Haeundae District.

The exterior of the vehicle is in dual tones of Royal Blue and Jubilee Silver two-tone, which is evocative of the shimmering sea and the contrasting glass skyscrapers that tower over the waterfront. The single coachline in Blushing Pink crosses the shoulder line of the car and circles the blue wheel centers just like the warm hues of the night-time illuminations of the Gwangandaegyo suspension bridge which are reflected in the waters of the bay. On the prow is an illuminated Spirit of Ecstasy.

This same luster is reflected in the interiors, with seats bound in Selby Grey leather having Cobalto Blue accents, the Starlight Headliner glimmering above and Blushing Pink trim in the stitching on the seats, instrument panel and ‘RR’ headrest monograms. The architectural motif features as an inlay in the center of the Piano Black fascia. It is also incorporated as an abstract embroidery on the leather waterfall between the rear seats, creating the perfect setting for the enjoyment of the 1300W, 18-channel Bespoke Audio system.