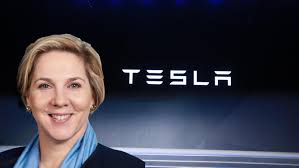 After a Twitter controversy about taking Tesla private and investigation by the Securities and Exchange Commission, Robyn Denholm has replaced Elon Musk as the chairman of Tesla. She was chosen as the new leader of the company by the company’s board of directors. Robyn Denholm is currently the chief financial officer of Australian telecommunications company Telstra and has been a member of Tesla’s board of directors from 2014. She will start working at Tesla full-time after she finishes her six-month notice period with Telstra.

Tesla said in its statement announcing her appointment that during the ensuing six months, Musk will serve as a resource to Robyn and give her any support that she asks for to facilitate the transition.
Musk was penalized with a USD 20 million fine after he reached a deal with the SEC to settle the charges the Commission brought. Tesla also agreed with the SEC to appoint two new independent directors to its board and to set up a committee which would oversee Musk’s communications. Musk will continue to retain his position as the CEO of Tesla.

The SEC had claimed that Musk misled investors when he tweeted that he had secured funding in order to take Tesla private at USD 420 a share though the deal was not final. This led to a surge in the price of Tesla’s shares, causing the company’s stock to soar. As part of the settlement with the SEC, Musk can’t seek reelection as chairman for three years, though he can still continue to be a member of the board.
Denholm is an executive with significant experience in corporate finance, and is her appointment is seen as a wise move in view of the considerable financial pressure Tesla is facing. Though Tesla recently announced good profits, analysts want to see more consistent profits.

Denholm has been the head of Tesla’s audit committee from 2014. Commenting on her appointment, she said in a statement that she believes in Tesla’s mission and looks forward “to helping Elon and the Tesla team achieve sustainable profitability and drive long-term shareholder value.”

Denholm became the chief financial officer at Telstra in October and had started her stint with Telstra as its chief operating officer in January 2017. During her stint in Telstra, her team supervised a dramatic cost cutting program that included laying off 8,000 employees.

Before joining Telstra, Denholm served as a non-executive director and member of the finance and audit committee for Swiss conglomerate ABB (ABB).She moved to ABB from her role as vice president and chief financial officer with Juniper Networks (JNPR), a Silicon Valley networking equipment and software security company, where she spent almost a decade. She has also previously worked with Sun Microsystems.

Denholm also has experience in the car industry, having worked as Australia finance manager for Toyota (TM) for seven years.