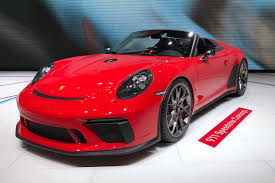 Porsche has announced that the company would be making a limited production run of its 911 Speedstar concept that will serve as a reminder of the 1988 911 Speedster. At the recent Paris Motor Show, Porsche unveiled the second variant of its concept vehicle that was in a bright shade of Guards Red.

Those who want to get a model should rush to place their orders as only 1, 948 units will be made in homage to the year 1948 when the Porsche 356 “Number 1” got its operating license.

When compared to the first Heritage concept that was launched in June, the second 911 Speedster concept had different 21-inch center-lock wheels with a highly visible cross-spoke wheel design which was highly similar to the 911 RSR and GT3 R race cars. In another connection to motorsports, the daytime running lights of the concept were tinted like the lights on some race cars and were finished in red to complement the exterior paint.
The black chrome and platinum which was sued for the side mirror caps and also for the fuel tank cap which is centrally located on the hood stand out in striking contrast to the Guards Red exterior shade.

The original “Heritage” concept had a light brown Aniline leather upholstery, but the concept at the Paris Motor Show had a partly perforated black leather upholstery with eye-catching red accents. In all other aspects, both concepts were exactly the same and were derived from the 911 Carrera 4 Cabriolet.

Porsche used the 911 GT3’s chassis for the concept vehicles and in order to minimize the weight made the fenders, front and rear bonnet and its trunk from carbon fiber composite. The exhaust system was made with titanium tips by the company’s GT. The six-speed manual gearbox and the flat-six naturally aspirated engine having an output exceeding 500 horsepower are also closely similar to those in the GT.

The 911 Speedster will enter production in 2019, and will be the first Porsche model to be offered with Heritage Design Packages created by Porsche Exclusive for those wanting more customization options.