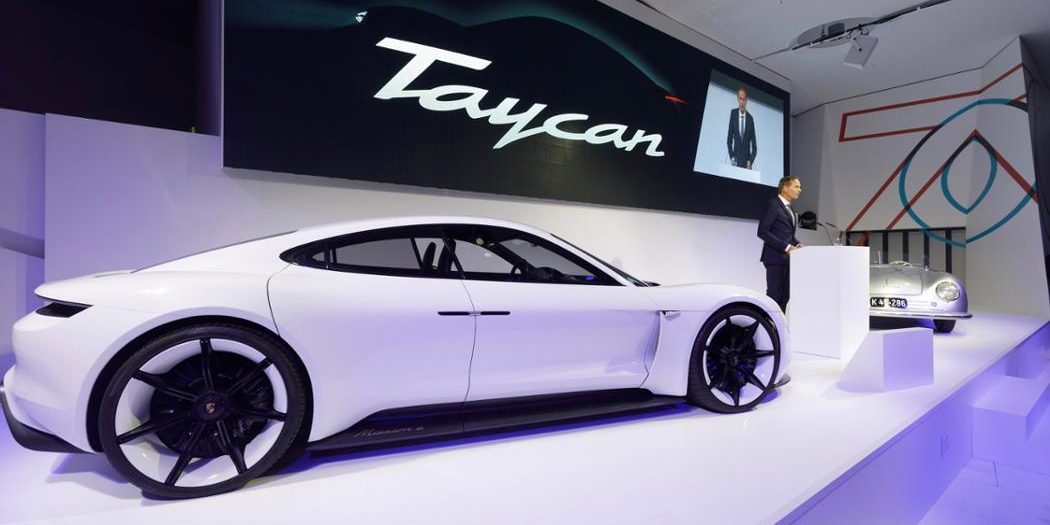 Porsche has launched the Taycan, which the company is calling the first mass produced electric car in the world. The Taycan was launched at an event that was livestreamed across three continents.
The 260-kilometres-an-hour Taycan dispels many preconceptions that the general public might have about electric vehicles being slow, plodding cars that cannot attain a decent top speed.

The event had Oliver Blume, chairman of Porsche’s executive board, unveiling the four-door Taycan symbolically in a former East German Air Force hangar in Berlin that has been repurposed as a solar farm, in keeping with the theme of green energy. His fellow board members did the same at Niagara Falls in Canada and on a wind farm in the Fujian province of China.

Speaking at the event, Blume called this a historic event as it marked the start of a new era, calling the Taycan a Porsche for the age of electromobility. Four years ago, Porsche had highlighted its commitment to sustainability with the Mission-E electric concept sports car which has been transformed into the Taycan with minimal changes.

The performance variants of the Taycan are called the Turbo and Turbo S, though they do not have turbochargers, in keeping with Porsche’s current naming scheme. The Turbo S delivers 751 hp compared to 671 hp for the Turbo. They go from 0 to 100 kph in 2.8 and 3.2 seconds respectively. The Turbo S has a range of 412 km while for the Turbo, it is 450 km, according to Porsche. The company is planningto make less powerful versions at a later stage, with the first such derivative being the Taycan Cross Turismo, which will be launched before the end of 2020.

Lutz Meschke, deputy chairman and member of the executive board in finance and IT said that Porsche’s plan was to ensure that 50 per cent of the brand’s model range is electric by 2025. This might even go up to 60 per cent so that Porsche can meet the legal FIA emission requirements. The next stage of the plan is to electrify the brand’s range of SUVs and this process would start with the Macan in 2022. The new Macan would use a platform that is shared with Audi and would help Porsche to save at least 30 per cent in terms of development costs.

According to Michael Mauer, chief designer at Porsche, it has been a top priority for Porsche for almost five years to become the first to market with a low-slung EV sports car. He said that hence, it was very important for the company to cater to the needs of customers both with regard to range and performance.

Recently, Porsche conducted a series of tests which involved subjecting the Taycan to 30 Launch Control starts that had the car accelerating from zero to 200kph and back to zero on a single charge. According to Porche, the Taycan is the first production vehicle having a system voltage of 800 volts. All others including Tesla models have voltages of 350 and 375. This high system voltage is expected to significantly reduce the time needed for recharging. Both the Turbo and Turbo S are powered by two electric motors with one motor being mounted inside each axle, thus effectively making them all-wheel drive.

The compact drive module effectively integrates the electric motors, transmission and pulse-controlled inverter which Porsche says has the highest power density (kW per liter of package space) of all electric powertrains which are available on the market. The Taycan has a two-speed transmission on its rear axle that is not seen in other EVs.
It has a virtual first gear that offers maximum power for standing start accelerations, while the second gear uses a longer ratio to ensure high efficiency and equally high power reserves at high speeds.

According to Porsche, the Taycan’s battery can be recharged in just over five minutes using direct current from the high-power charging network for a range of up to 100km. Under ideal conditions, the charging time for 5 to 80 per cent state of charge is 22.5 minutes and the maximum charging power is 270kW.

An issue most manufacturers are finding is that a skateboard-like chassis where batteries fill the full length of the floor give the car a stall stance. At Porsche, all models are low slungand this proved to be a stumbling block in terms of design.

Michael Mauer, chief designer at Porsche, said, “Being Porsche, our cars have to be low, so this provided some real challenges when it came to packaging and proportion”. But the team managed to keep the center of gravity lower in the Taycan than in the 911 coupe. “There were some ¬intense discussions because we needed to enforce this low look and, thanks to the pressure, we came up with some intelligent solutions.”

The cockpit comes with a new design, which includes a free-standing instrument cluster that was first seen in the 918 Spyder prototype. The Taycan though has the latest curved instrument cluster. A central, 10.9-inch infotainment display and an optional passenger display together form an integrated glass band. Conventional switches have been replaced with a touchscreen operation that uses haptic feedback via pulses through the fingers. Mauer explained that the objective was to create a very futuristic, clean interior without any switches and a seamlessly integrated center console display and passenger display.

With regard to the exterior, the focus of the designers was on emphasizing that the model is completely new while retaining the Porsche DNA. Features borrowed from other Porsche models include wide haunches over the rear wheels, raised front guards which bookend a sloping front bonnet and a rear tail light that extends across the full width of the car.

“Some manufacturers tried to change everything because they want to detach their new EV product from their traditional range, while others wanted to not change anything and only identify the EV with a badge,” said Mauer. “We needed to go down the middle so that Taycan was instantly identifiable as a Porsche but equally recognizable as an EV and a new Taycan.”

The Porsche Taycan was launched on September 4, 2019, across three venues – a solar farm in Germany, the Niagara Falls in Canada and on a wind farm in the Fujian Provence of China in keeping with the theme of sustainability.

At the launch event, former Porsche LeMans driver and Formula One racer Mark Webber who has contributed to many of the car’s development miles attested to its performance on the racetrack. The two-time winner of the Monaco grand Prix said that he chose to drive the model extremely hard as instructed during testing and though like all electric cars, the car carried more weight, it preformed exceedingly well. There is no engine at the front and hence there’s little weight over the nose. Thus, it performs very well with regard to cornering.