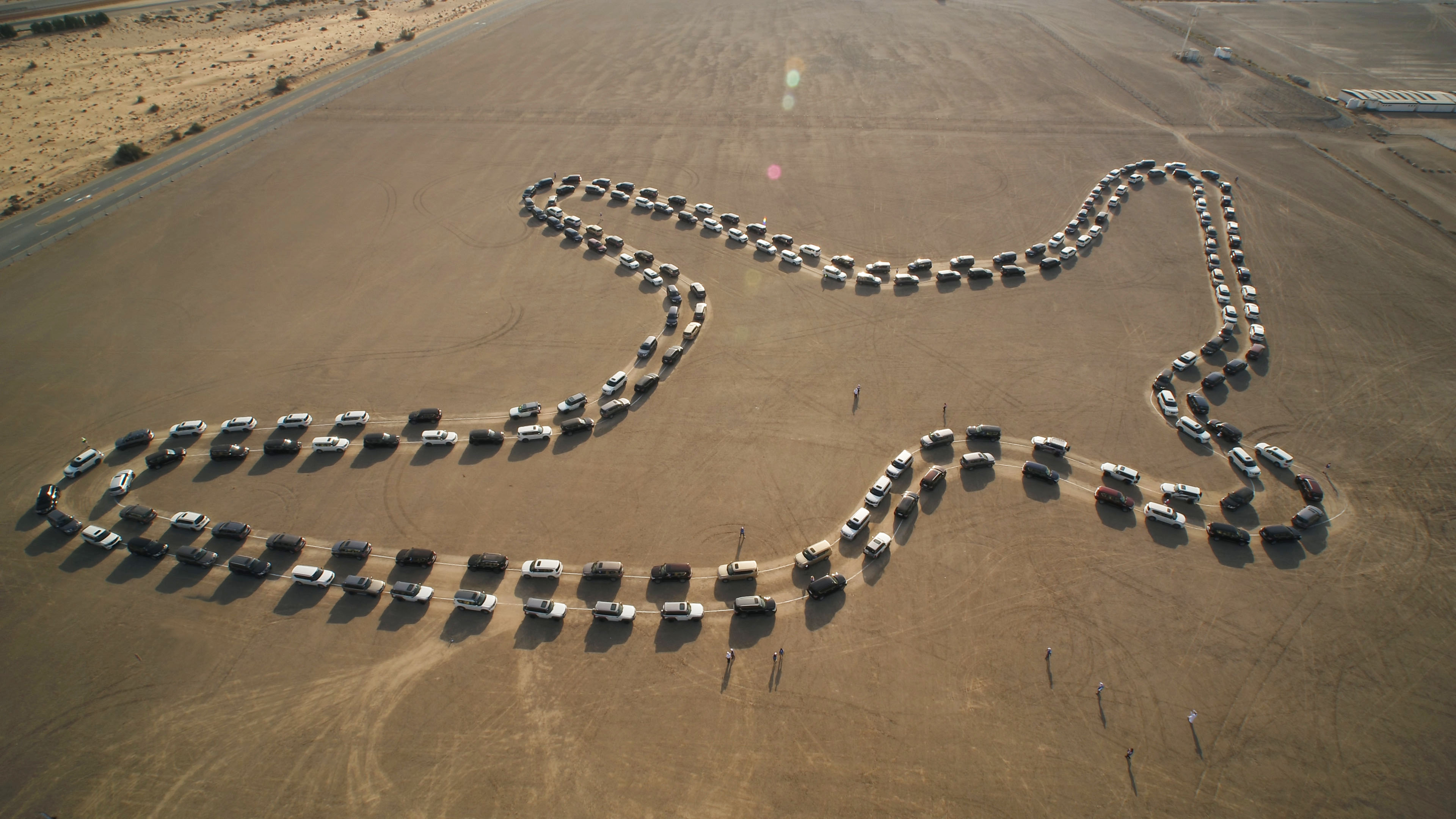 The Nissan Patrol has broken another GUINNESS WORLD RECORDS title for the Largest Synchonised Car Dance. Nissan conducted an activation as part of which it had the largest number of cars moving together within a formation. As many as 180 Nissan Patrols were used in the attempt to break the record as they drove in a synchronized routine to take on the shape of a giant desert falcon. This marks the third time that the Nissan Patrol has achieved a GUINNESS WORLD RECORDS title.

This new record was achieved at the Dubai Rugby 7s stadium, and managed to break the previous Guinness world record by 36 cars. The record breaking attempt was helmed by international racing driver Axcil Jefferies. Two concentric lines of cars drove a total distance of 1, 476 meters in opposite directions around the outline of a falcon. The shape formed by the 180 Nissan Patrols taking part in the attempt measured 176.5 metres by 225 metres. When it was viewed from above, the activation replicated the shape a giant falcon that took wing over the sands of the Arabian desert.

This was the third record that the Nissan Patrol has earned. In September 2015, the Patrol broke the record for the fastest ascent of a 100 meter sand dune by a car, by scaling the dune in just 4.9 seconds. The first record it earned was when the Nissan Patrol successfully towed the world’s heaviest aircraft for more than 164 feet (50 meters) at Sharjah International Airport in the UAE in August 2013.

The attempt to break the record was also a part of Nissan’s official celebration of adding three new editions to the Nissan Patrol family this month. The Patrol Safari Falcon, Gazelle and Gazelle-X models were developed exclusively for customers in the Middle East and are available only in this region. The names of the new cars also inspired the shape formed during the record-breaking synchronised car dance.

Commenting on the new record, Kalyana Sivagnanam, Regional Vice President, Marketing and Sales, Nissan AMI and President of Nissan Middle East said that Nissan is committed to bringing its customers ‘innovation that excites’ and the record making attempt was in keeping with this spirit. He added that the Patrol family holds a unique and special place in the hearts of customers in the Middle East, with year-on-year sales increases across the entire range. He felt that the recent launches of the Patrol Falcon, Gazelle and Gazelle-X will reinforce the Patrol’s proud legacy as one of the only true all-terrain vehicles of its time, and the new GUINNESS WORLD RECORDS title would further reinforce the Patrol’s legendary status in the region.

“What makes this achievement even more special is the fact that everyone who took part in the record-breaking attempt was Nissan staff” added Juergen Schmitz, Managing Director of Nissan Middle East. “It was a great privilege to give our employees the opportunity to take part in this landmark achievement. We were so pleased by the enthusiasm displayed by everyone, and single-minded determination they demonstrated towards achieving this goal.”

The Nissan Patrol range is highly popular in the Middle East. In Nissan Middle East’s Financial Year 17 (April 2016 – March 2017), the Patrol’s market share increased by 11.4 percent compared to the previous year, with the Patrol becoming the best-selling full-size SUV in the UAE. From 2011, sales of Patrol have increased fourfold, with market share being up by 167 percent. In the first half of Nissan Middle East’s current financial year (April – September 2018), there was a year-on-year increase in sales of the Patrol Safari family of 30 percent across the Middle East region (excluding KSA).

This is the sixth such record that Nissan Middle East has achieved, with three being earned by the Patrol. The most recent record was achieved when driver Masato Kawabata (Japan) achieved the fastest ever vehicle drift. Kawabata reached an impressive speed of 304.96 km/h (189.49 mi/h), while driving a Nissan GT-R Nismo during an event at Fujairah International Airport in April 2016.