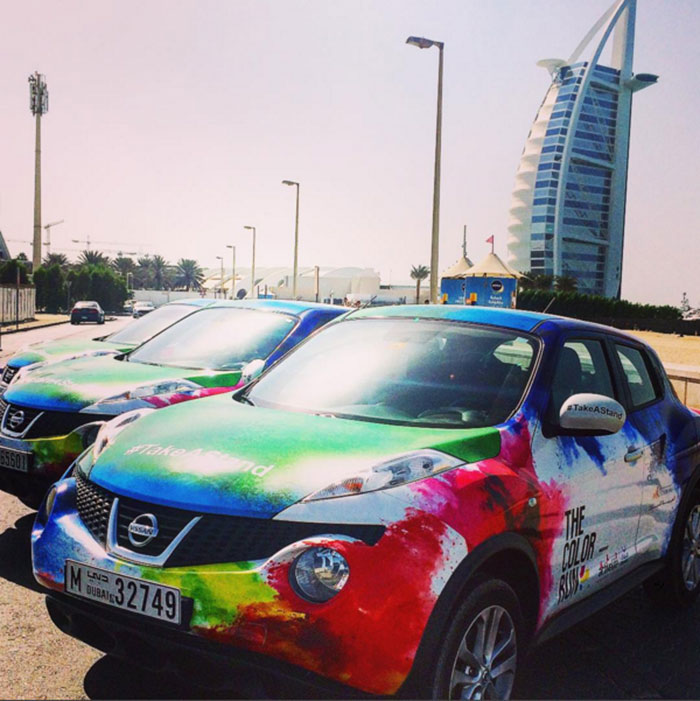 Nissan Juke Official Vehicle for The Color Run in Dubai

For the second consecutive year, Nissan Middle East and Arabian Automobiles, the company’s exclusive dealer in Dubai and the Northern Emirates collaborated with Daman to support the company’s The Color Run which is a fun-filled 5km fun run that has been called the “Happiest 5k on the Planet.”

As part of its support for the event, Nissan will be one of the sponsors of all the three color runs that will be held in Dubai, Abu Dhabi and Doha. For The Color Run in Dubai, which will be held at the Dubai Autodrome on Saturday, 21st November, the Nissan Juke, Nissan’s compact SUV will be the official vehicle is of the event.

Commenting on the sponsorship, Fadi Ghosn, Chief Marketing Officer of Nissan Middle East, said that the company decided to extend its sponsorship to this year’s event as an outcome of the immense success of the event in 2014. It is an extension of Nissan’ss concept that motoring is not just about getting from point A to point B but also about At Nissan we believe that Motoring shoufun and excitement. This made the Nissan the perfect sponsor and Nissan Juke the perfect official vehicle for the event as The Color Run is all about sharing fun.

The Color Run presented by Daman’s ActiveLife is a five-kilometer, un-timed fun run. The fun element is added to the mix when all the runners participants in the race are doused from head to toe in different colors at each kilometer mark after the run is completed, colored powder is used to create more color combinations and to add to the revelry. According to the organizers, anything goes as long as participants agree to wear only white and end the race with hues from all the colors in the rainbow.

In addition to the fun that thousands of participants have at The Color Run, it is all about giving back to the community ad USD 1 of each entry is given to charity through JustGiving, which is the world’s largest fundraising platform. Runners can also opt to make additional donations from their personal fundraising initiatives.

Salah Yamout Director of Sales and Marketing at Arabian Automobiles Company commented: “As Nissan’s exclusive distributor in Dubai and the Northern Emirates, we come to look forward in sponsoring the most awaited event ‘Color Run’. With this fundraising event, we aim to contribute to society and to encourage more people to include physical activities as part of a healthier lifestyle.”

Nissan has plans to add to the fun element at The Color Run with some interesting activations that are meant to encourage participants to share their take on the event through creative and colorful snaps on social media.

A few local artists have been selected to showcase their creativity by painting outlines on a mural wall board, where runners will be able to throw color powder to create a picture. Runners can use the hashtag #TAKEASTAND and share their images of the mural to make an impact with their artistic skills.