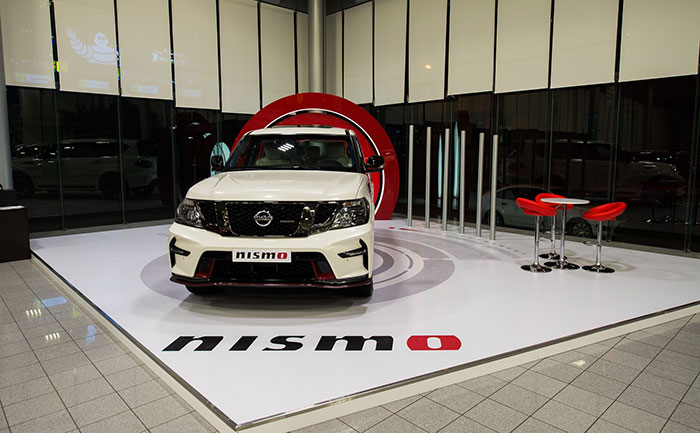 Nissan has announced that the first dedicated NISMO showroom corner will be launched in the Middle East before being introduced on a global basis. Called the ‘NISMO Corner’, the area will be a unique space for customers to learn more about Nissan’s performance vehicles and products, and is a totally new showroom concept that was developed in the Middle East.

The conceptualization of the NISMO Corner has evolved naturally from the regional unveiling of the NISMO brand and vehicles in October 2015, and NISMo Corner will soon make its appearance at seven regional dealerships across the Middle East.

Speaking about the move, Samir Cherfan, Managing Director of Nissan Middle East said that the Middle East continues to be a significant growth market for the company on a global basis and the NISMO Corner attests to the Middle East team’s creativity in coming up with new customer experiences that will surpass global expectations. With its unique combination of luxury and performance, the new Patrol NISMO has set a benchmark when it comes to exceeding customer expectations. The new showroom space has been designed to reflect this high level at the very first customer touchpoint.

The NISMO corners are designed in a combination of white and red to create a visual impact and convey the spirit of excitement associated with the brand with space for merchandise near the display vehicles. Each display will include space that is large enough to allow customers to interact with the vehicle and converse freely with NISMO sales advisors.

NISMO has developed quite a reputation in the world of motorsports and give millions of automotive fans and enthusiasts an inkling of what Nissan’s models will look like in the future. The first NISMO first model to be sold in the region was the Patrol NISMO, which became available in showrooms in March 2016.