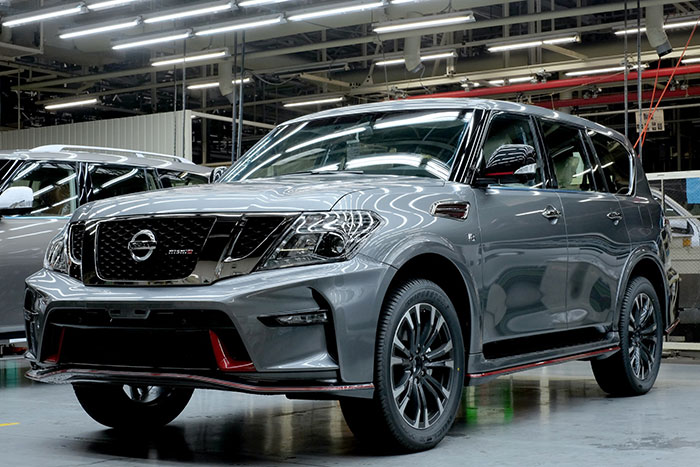 Nissan Begins Production of the Patrol NISMO at Kyushu Plant

Nissan customers have long been waiting for the launch of the Nissan Patrol NISMO model in the Middle East, ever since it was launched in Dubai last October. It is the performance version of Infiniti’s QX80 but it is now in a more sporty avatar with a more powerful engine, a more responsive power steering system and more aggressive styling for the bodywork.

Now, in a welcome move, the Japanese auto manufacturer has announced that the model will be available in the region well ahead of the planned schedule, by March 2016. This has become possible due to the commencement of production of the model at Nissan’s plant in Kyushu, Japan.

A delegation of guests from the Middle East was flown to Japan to witness the launch of the new assembly line for the manufacture of the new Nissan Patrol NISMO.

The Kyushu plant has long been a crucial component of Nissan’s manufacturing footprint. Nissan first started making engines at the plant in April 1975, making the plant the oldest vehicle manufacturing plant in Kyushu. The plant has been steadily increasing its output and expanded its model range through the addition of more assembly lines and more employees. It has achieved several manufacturing milestones including production of 5 million units by November 1992 and 10 million units in December 1004.

Provided all goes as planned, the Nissan Patrol NISMO will be available before the end of this fiscal year and will be priced from $100,470 USD in the UAE. Prices per market will vary from region to region.