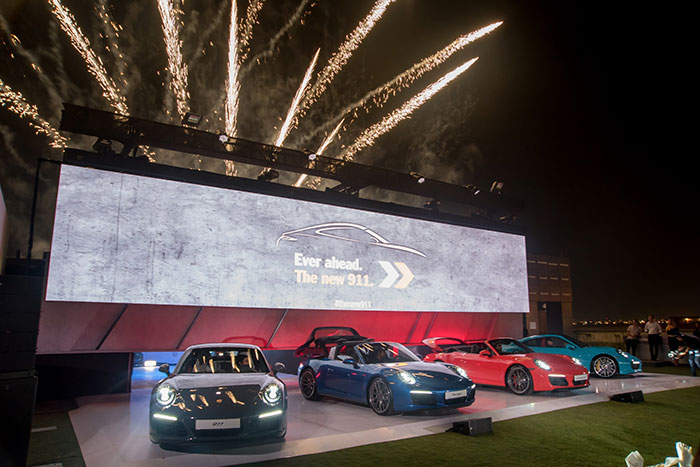 Al Nabooda Automobiles held the launch of the new faster, more powerful Porsche 911 at the Porsche Centre Dubai yesterday. The 2016 Porsche 911 is the most powerful version of the model so far and is available in a wide range of variants including the cabriolet and coupe versions. The most distinctive characteristic of the new model is the turbocharged .power units which have been developed by Porsche based on what it has learned on the racetrack.

Porsche’s commitment to transferring technology from the track to the road has given the new 911 a more powerful and fuel –efficient engine. The performance has increased by 20 hp for all variants and the petrol consumption is less by 1 liter per 100 km. The exterior of the 2016 version has a sharper design while the interiors have been fitted with the new Porsche Communication Management (PCM) system for giving drivers better access to the controls and connectivity.

At the launch event of the new 911 range, Vijay Rao, General Manager of Porsche Centre Dubai, said that the Porsche 911 is a unique success story, due to the iconic status it has attained over the past years. The model has set new benchmarks when it comes to the performance of sports cars while at the same time it offers motorists the highly attractive combination of a model that is stunning to look at and highly practical to use on a daily basis. There are variants to suit the preferences of every driver and all the variants offer customers pure Porsche performance. The new model comes with groundbreaking innovations that not only make the model more powerful but also make it more efficient , thus helping Porsche to reinforce the 911’s position as a segment leader.

The 911 has a heritage of over 50 years and serves as an inspiration for all other models of Porsche. It has been developed, tried and tested on some of the most challenging racetracks in the world, winning more races than any other model. At the same time, it is a model that is eminently suitable for daily use.

The Carrera and Targa models have been fitted with completely new generations engines with bi-turbo charging, and are truly exceptional when it comes to efficiency, performance and driving pleasure with their combination of turbochargers with modified compressors, enhanced exhaust system and tuned engine management. The new 911 Carrera produces 370 hp, whilst the 911 Carrera S delivers 420 hp. The 911 Carrera goes from zero to 100 km/h in 4.2 seconds, while the 911 Carrera is two tenths of a second faster than its predecessor. The 911 Carrera S with PDK and Sport Chrono Package go from 0-100 kph in just 3.9 seconds.