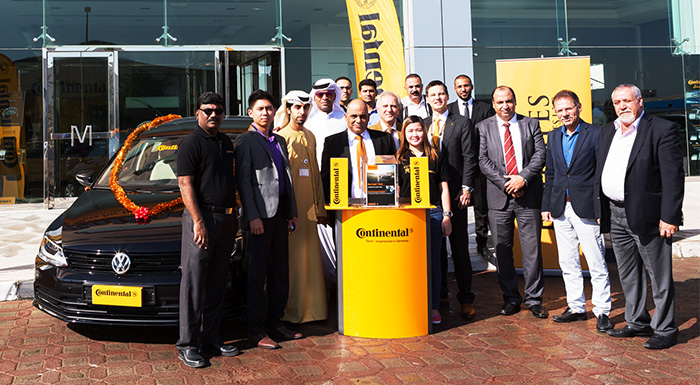 Continental Tire, the German manufacturer of premium tires teamed up with its exclusive distributor in the UAE, Emirates for Universal Tyres (EUT) to hold a raffle draw in which a loyal customer won a Volkswagen Jetta. Customers who purchased Continental tires over a period of two months were eligible to participate in the raffle draw which offered the Jetta as the prize.

The winner of the raffle draw, Faisal Rifiei received the keys to the Jetta at an official ceremony which was held at the EUT showroom in the Musaffah area of Abu Dhabi. Rifiei participated in the raffle after buying a set of premium German Continental tyres at his local showroom.

Speaking about the raffle, Jose Luis de la Fuente Managing Director of Continental Middle East said that Continental is always on the lookout for opportunities to reward the company’s customers. The raffle promotion was a perfect example of the way the company teamed up with one of its retail partners to reward customers.

General Manager of EUT, Ahmed Elmewafy commented that as the only distributor of Continental tires in the UAE, it seemed to be highly appropriate to run a promotion in which a loyal customer received a product that would allow him to experience yet another premium German brand in the form of the Volkswagen Jetta.

He added, “We would like to congratulate the winner on his prize and wish him all the best.”

Established back in 1871 in Hannover, Germany, Continental has now emerged as one of the leading automotive suppliers in the world. Due to its leadership position in tire development and technology, it has been selected as the OEM tire supplier by top automotive manufacturers.

Emirates for Universal Tyres is the exclusive distributor of Continental passenger, light truck and commercial vehicle tires in the UAE market. The company is a subsidiary of the Abdulla Al Masaood and Sons Group, a major persified group in the UAE with strong credentials in the automotive sector.