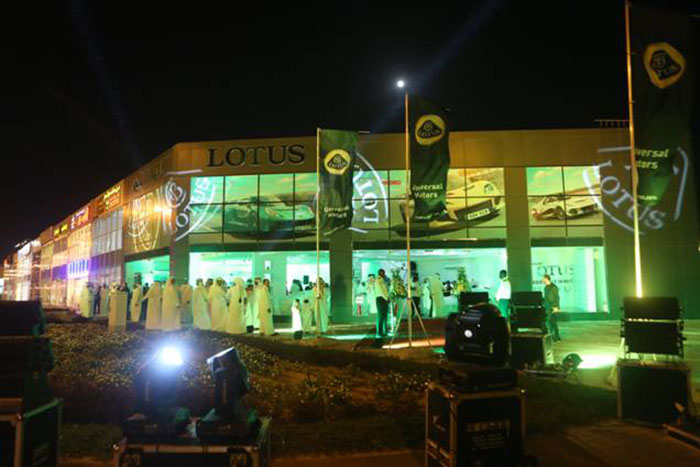 Lotus officially launched its showroom in Doha with the launch of its Lotus Evora 400 sports car.The new showroom on Salwa Road has been opened as the outcome of the collaboration between Lotus Cars Middle East, the official distributor for Lotus cars in the Middle East and Universal Motors.

Many eminent dignitaries including Jean-Marc Gales, CEO of Group Lotus plc, Sheikh Mohammed Bin Ahmad Al Thani, Chairman – Universal Motors, members of the media, senior officials from both companies attended the official opening ceremony of the showroom. Both the popular Lotus Evora 400 and the renowned Lotus Exige were effectively showcased at the new showroom.

Speaking at the opening of the showroom, Jean-Marc Gales, CEO of Group Lotus plc said that Lotus sets the standard when it comes to highly desirable sports cars and high performance. Lotus now has a range of cars that are renowned for their performance and speed. Qatar is a key market which offers great potential in the Middle East.

Sheikh Mohammed Bin Ahmad Al Thani, Chairman – Universal Motors said, “We are excited and proud to represent the globally recognized brand of Lotus in this market. He added that Universal Motors has considerable knowledge and experience of the automotive market in Qatar and is highly committed to providing customer service of the highest standard. The new standalone Lotus showroom will allow Universal Motors to showcase the Lotus models effectively.

Jonathan Stretton, Lotus Cars Middle East Regional Director said that joining hands with Universal Motors was the next step in the expansion for Lotus Cars Middle East and highlights the company’s commitment to expanding the presence of the Lotus brand in the Middle East. Lotus has a global reputation for its combination of style and performance and exclusivity.

Lotus Qatar is the latest addition to the Lotus Cars Middle East portfolio and will play a key role in the brand’s plans to expand its presence in the region by exploring the potential of both new and existing markets. Currently, Lotus Cars Middle East has dealerships in the United Arab Emirates, Kuwait and Lebanon, with further market and showroom launches planned in the near future.