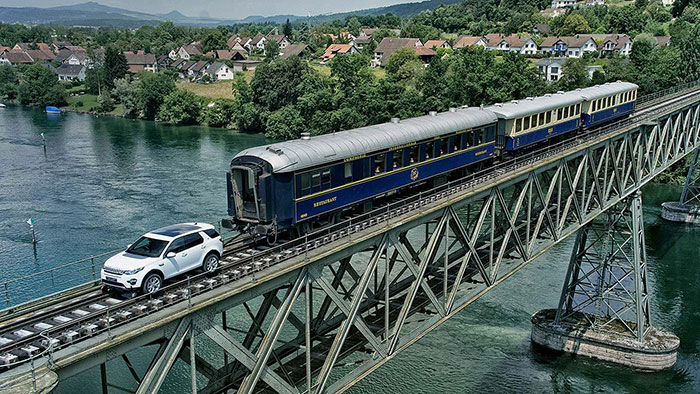 The stunt to demonstrate the vehicle’s 178bhp Ingenium diesel engine, towing capacity and semi-autonomous driving technology was performed on a 85 ft high bridge in Switzerland. The Discovery Sport’s certified maximum towing weight is 2,500 kg (2.5 tonnes), but it was able to pull 58 times its own weight by utilizing Land Rover’s towing and traction technologies such as Terrain Response, Tow Assist, Tow Hitch Assist and All Terrain Progress Control. All Terrain Progress Control is a semi-autonomous off-road driving system that automatically manages engine output and braking to give vehicle maximum traction, thus enhancing its towing capacity.

The Discovery Sport towed the three railway carriages for a distance of six miles, without using a low-range gearbox, and relying exclusively on the torque provided by the diesel engine and the Land Rover’s All Terrain Progress Control (ATPC) system, which is meant to maximize traction at a set speed. Just like a low-speed cruise control, the ATPC allows the driver to focus on the road, instead of worrying about traction or towing capacity.

Speaking about the feat, Karl Richards, lead engineer for stability control systems at Jaguar Land Rover, said that towing is part of Land Rover’s DNA, and the Discovery Sport proved its exceptional towing capabilities through the stunt, despite being the smallest model in the range.

He added, “Over the years, we have introduced game-changing towing technologies to take the stress out of towing for our customers. I’ve spent most of my career travelling to the most punishing parts of the world to test Land Rovers in grueling conditions, yet this is the most extreme towing test I’ve ever done.”

Land Rover has a longstanding history of rail conversions, from the days when Series II and IIA Land Rover and various Defender models were modified to run on rails for maintenance. The launch of the Discovery I in 1989 was a particularly impressive event when a converted Discovery demonstrated the capability of its new the 200Tdi diesel engine by towing a series of carriages in Plymouth.

The British firm Aquarius Railroad Technologies which specializes in road-to-rail 4×4 conversion fitted the rail wheels to the otherwise standard Discovery Sport. James Platt, the managing director of the company said that the relatively small Discovery Sport’s ability to pull a combined weight of more than 100 tonnes demonstrated real engineering integrity. He concluded, “No modifications were necessary to the drivetrain whatsoever and in tests the Discovery Sport generated more pull than our road-rail Defender, which is remarkable.”