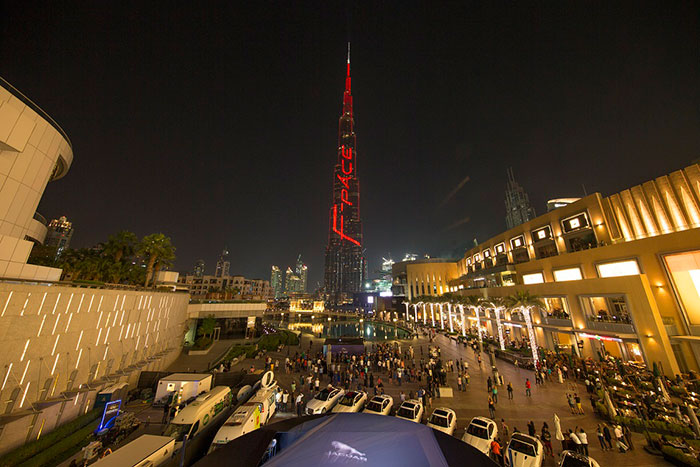 Jaguar Land Rover chose to mark the launch of its All-New F-Pace performance SUV in the Middle East with a world first. It created a spectacular show on the façade of the iconic Burj Khalifa in Dubai. In a dramatic three minute spectacle that Jaguar fans witnessed through the brand’s online channels, the SUV was unveiled with a spectacular projection of the Dubai cityscape across the huge central panel of the Burj Khalifa façade, and the F-PACE outline roaring into view, scaling the length of Burj Khalifa. The façade then showcased a beautifully crafted Arabic calligraphy symbol by renowned Arab artist Wissam Shawkat to mark the advent of the F-Pace which was then unveiled and took centerstage almost six meters off ground-level, surrounded by a burst of eye-catching fireworks in a choreographed finale. The vehicle was simultaneously unveiled beside the Horse 2007 statue by Fernando Botero at The Dubai Mall promenade level in front of Burj Khalifa and was later available to the specially invited guests for a “touch and feel” experience.

The Burj Khalifa’s LED Façade which spans a total area of 32,467 square meters, holds the Guinness record as the ‘World’s Largest LED-Illuminated Façade’ over 70,000 LED bulbs across the structure were used to bring the Jaguar display to life across the imposing landmark which is 828 meters tall.

The exclusive launch event was held at the quintessentially British Fortnum & Mason overlooking Burj Khalifa and the VIP guests enjoyed exceptional food and an impressive view of the launch display.

Speaking directly after unveiling of the F-Pace, Jaguar Land Rover MENA Managing Director Bruce Robertson, said: “The All-New Jaguar F-PACE is the ultimate practical sports car and the most important launch in our brand history; delivering an unparalleled driving experience. What better way to welcome the F-PACE to the region than with a world-first on the world’s tallest building – the iconic Burj Khalifa.”

He went on to add that Jaguar is a niche brand that is manufactured on a relatively smaller scale but is no stranger to world-firsts and expressed his pride in the regional team for working on turning the launch event into an unforgettable global milestone which no other commercial brand, international or otherwise could match.

The All-new Jaguar F-PACE is a dynamic five-seat performance crossover that offers the perfect combination of a luxurious and spacious interior with a practical and sporty exterior design. Designed, engineered, and manufactured in the UK, the Jaguar F-PACE has been comprehensively tested for its use in the region at Jaguar Land Rover’s Engineering Test Centre in Dubai. It is now available to order at exclusive Jaguar retailers across the Middle East and North Africa region.