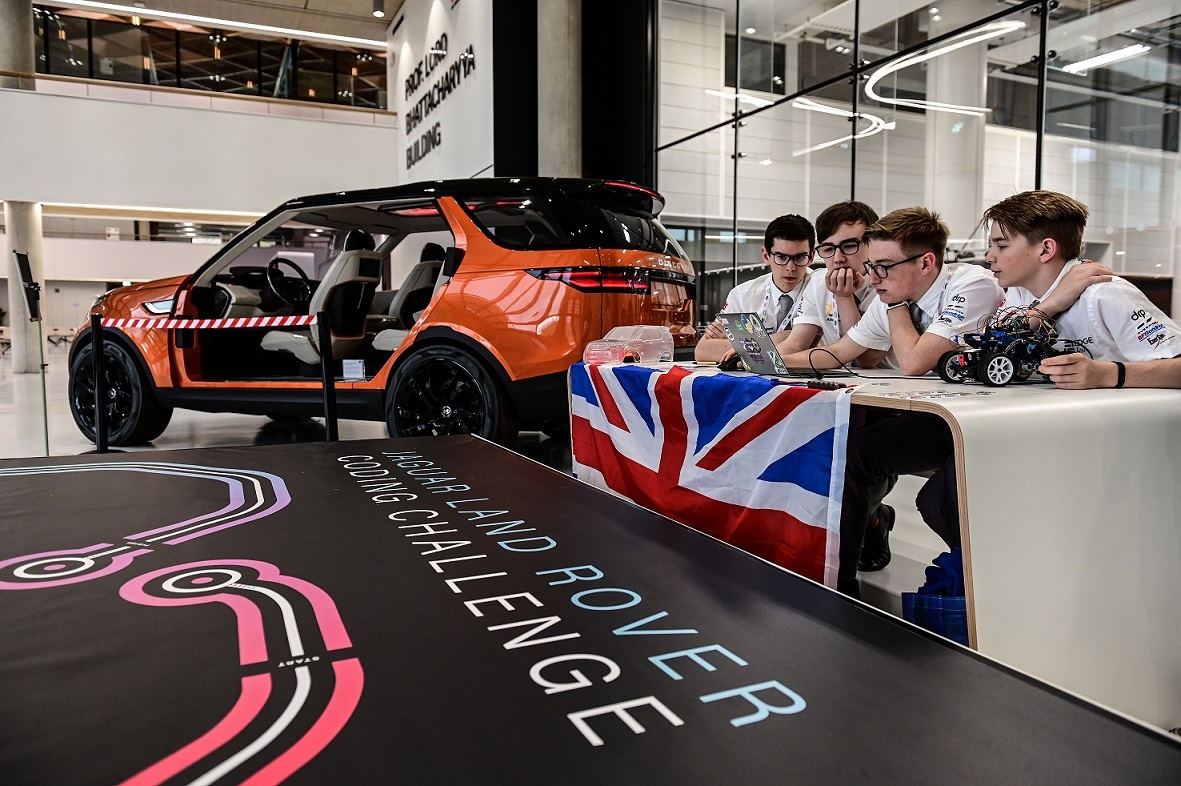 Jaguar Land Rover has come up with a unique Land Rover 4×4 in Schools program to enlist teenagers in its quest to develop self-driving vehicles for the future.

It is estimated that self-driving cars will need at least one billion lines of computer code, which is about a 1,000 times more than the 145,000 lines NASA needed to land Apollo 11 on the moon. Jaguar Land Rover is making a bid to inspire the next generation of software engineers as part of its drive to cater to the growing need for more coders in order to deliver its future autonomous and connected vehicles.  The company is holding a contest called Land Rover 4×4 In Schools Technology Challenge, a global education enrichment initiative that will encourage young people to take up STEM careers. The talented teenagers participating in this contest were able to write 200 lines of code in just 30 minutes, and the code thus produced was able to successfully navigate a scale model Range Rover Evoque around a 5.7-metre circuit.

Commenting on the initiative, David Lakin, Head of Education from the Institution of Engineering and Technology (IET), said that the globe is facing a digital skills shortage. The UK alone requires over than 1 million software engineers to fill the growing demand for roles which need knowledge of coding, software engineering or electronics.

Lakin said, “Digital skills are vital to the economy, which is why the IET is proud to support initiatives like the Land Rover 4×4 In Schools Technology Challenge to ensure we inspire, inform and develop future engineers and encourage diversity across STEM subjects from a young age. If we are to safeguard jobs for the next generation, we must equip the workforce of the future with the skills they will need to engineer a better world.”

Based on 2018 figures, there were 23 million software developers across the globe and by 2023 this is expected to grow to 27.7 million. Research conducted by the World Economic Forum says that 65 percent of students today will end up working in roles that do not exist currently.

This year, Jaguar Land Rover plans to launch a new Digital Skills Apprenticeship program that is meant to attract the brightest computer engineers to help code its next-generation electric, connected and autonomous vehicles and thus support the factories of the future.

Nick Rogers, Executive Director of Product Engineering at Jaguar Land Rover, said that in view of the rapid changes in the automotive industry, computer engineering and software skills have become more important than ever. This is slated to increase as companies focus more on the production of autonomous, connected and electric vehicles. The UK would need 1.2 million more people with specialist digital skills by 2022. Rogers said that as a technology company, it is up to the company to  help inspire and develop the next generation of technically curious and pioneering digital engineers. Jaguar Land Rover plans to use programs like the Land Rover 4×4 In Schools Technology Challenge and its forthcoming Digital Skills Apprenticeship program to help achieve this goal.

The Land Rover 4×4 in Schools program has made it possible for the car manufacturer to reach over four million young people from 2000. In 2019, 110 students drawn from 14 countries qualified for the world finals which were held at the University of Warwick. The NewGen Motors team from Greece emerged as the winners of the trophy after two intensive days of competition.

Mark Wemyss-Holden, former teacher and Curriculum Content Developer, said coding is very important for the industry and though teachers do an excellent job of delivering the curriculum, schools have time and budgetary constraints as well as competing priorities. The private sector, and program like Land Rover 4×4 In Schools can help bridge the gap between what learners like studying and how the skills they learn in school can be translated into a future career.

Jaguar Land Rover is trying to position itself as a leader in the development of Autonomous, Connected, Electric and Shared (ACES) mobility services space and has invested in Global Pioneering Hubs across the world– including ones in Shannon, Republic of Ireland; Budapest, Hungary and Portland, in the United States.

John Cormican, General Manager for Vehicle Engineering, Shannon, said: “Shannon has an important role to play in realising the company’s vision for autonomous and connected vehicles, but we can not deliver this future without the very best minds – individuals who could write the next chapter for Jaguar Land Rover. It’s fantastic to see the company taking such an innovative approach towards investing in the next generation.”