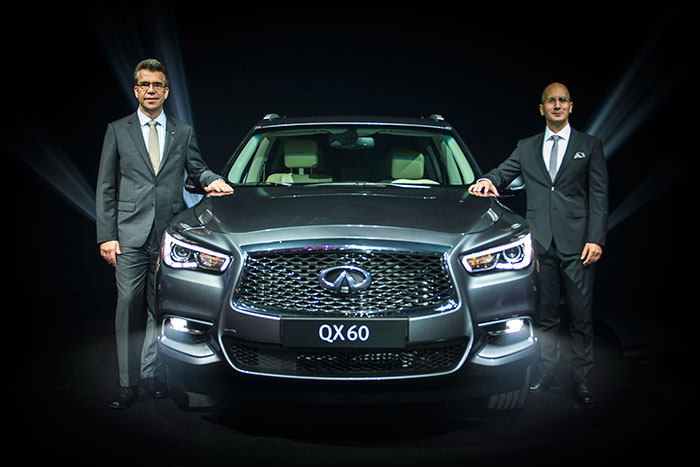 Infiniti along with Arabian Automobiles, the flagship company of AW Rostamani Group which is the sole dealer for Infiniti in Dubai and the northern Emirates, jointly debuted two new premium crossovers, the Infiniti QX60 and QX50 at an exclusive event in Dubai.

The launch of the two new models is part of Infiniti’s drive to boost the brand with a massive product offensive. Many other announcements are in the pipeline as part of this drive to increase the brand’s market share in the Middle East.

Commenting on the launch of the two new models, Juergen Schmitz, Managing Director, Infiniti Middle East said that the launch of the Infiniti QX60 and QX50 reaffirms Infiniti’s commitment to broaden its product range in the Middle East and on a global basis. Both the models are notable for a complete revamp in the external design. While the QX60 has a number of technological innovations, the QX50 is also a bigger, better model, especially with regard to rear legroom.

Infiniti’s crossovers account for a major portion of its sales in the region and the sales for both the models contributed in a significant manner to the results in Fiscal Year 15 with almost 2,500 deliveries.

Salah Yamout, Director of Sales and Marketing’ Arabian Automobiles Company, the exclusive distributor for Infiniti in Dubai and the Northern Emirates said that his company was extremely proud to launch the two new vehicles with Infiniti Middle East. He added that results have been excellent for the first quarter of the year with a growth of 17 per cent in comparison to the same period for the last year and expressed his confidence that the two new models would boost sales.

The new QX60 uses LED lighting to greater effect and has new LED daytime running lights and front fog lights with LED lights and chrome finishers. The double-arch grille has been redesigned and has standard-fit bi-xenon headlamps on both sides. Other signature elements include the crescent-cut D-pillar and a double-wave bonnet.

When it comes to the interiors, Infiniti’s QX60 has a driver-oriented cockpit, with thin chrome accents and an upper instrument panel that has been wrapped in soft-touch material having contrast stitching.

New technological features include Forward Emergency Braking (FEB) with Pedestrian Detection which when added to the already existing features like Backup Collision Intervention, Predictive Forward Collision Warning, and Around View Monitor makes the QX60 one of the safest 7 seater crossovers in the premium segment from a technological standpoint.

The driving experience in the QX60 is more comfortable and flexible with the new suspension components and settings. The revised steering system delivers greater feedback the Q60 is a powerful performer on the road with the Intelligent All-Wheel Drive and an efficient 3.5-liter V6 gasoline engine.

The size of the Q50 is significantly bigger, with the wheelbase increasing by 81mm while the total length of the model has increased by 114 mm. Thus the interior volume has increased by 235 litres and the rear legroom in the second row has gone up by 109 mm.

The QX50 LWB also incorporates a number of technological advancements including Streaming Audio through Bluetooth® wireless technology, Advanced Around View® Monitor (AVM) which includes front and rear sonar, 7-inch colour display with Infiniti Controller. Customers also can choose to have Infiniti Hard Drive navigation System with a colour touch-screen display paired with a Bose Premium Audio System having 11 speakers as an optional extra.