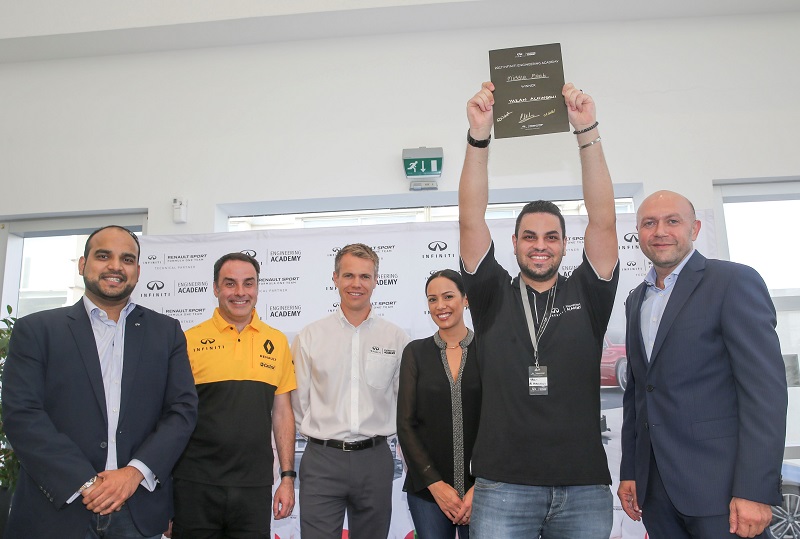 Yazan Alhindawi, a UAE based engineering student of Jordanian origin emerged as the Middle East winner of the Infiniti Engineering Academy 2017. Thanks to the contest, he will get the career opportunity of a lifetime with stints at Infiniti and the Renault Sport Formula One team. He beat nine other finalists from the region who were chosen from thousands of entries. The finalists showcased their skills at an action packed event that was held at the Infiniti Arabian Automobiles Centre in Dubai.

As the winner of the Middle East leg of the Infiniti Engineering Academy 2017, 24-year-old Yazan Alhindawi will be flying to the UK in October and will get a chance to work alongside some of the leading engineers in the world in the field of motorsports and automotive engineering. Other perks include all travel expenses, accommodation, access to an Infiniti company car, and a salary.

Alhindawi who is a Mechanical Engineering Graduate and is currently working on a Masters in Health, Safety and Environment at the Petroleum Institute. He will be spending six months working at Renault Formula One Team’s Technical Center in the UK (Enstone) and six months working at Infiniti’s European Technical Center (Cranfield). He will be a part of the team that is engaged in the transfer of technical knowledge and expertise between the Renault Sport Formula One Team and Infiniti.

Commenting on Alhindawi’s victory, Tommaso Volpe, Global Director, Infiniti Motorsport said that with every edition of the Academy, he was more and more impressed by the interest the contest has drawn from students all over the world and the level of the talent they have demonstrated. Students are attracted by the achievements of former graduates of the Academy graduates, who have gone on to forge successful careers in both the automotive and motorsport industries.

Volpe added that Formula One has become more relevant to the automotive industry in the light of the rapid pace at which technological advances are being made. The increased focus of the placements this year is on the development of road cars.

He said, “We are training a new generation of engineers who will play a key role in the crossover between the two industries,” added Volpe.

Juergen Schmitz, Managing Director, Infiniti Middle East commented that Infiniti was proud to announce Yazan as the winner of the Infiniti Engineering Academy. During the finals, throughout the course of two days, he demonstrated hard work, dedication and a strong team work ethic – all of which are values that we are valued highly valued at Infiniti.

Commenting on his win, Alhindawi said, “When my name was announced, I couldn’t believe it! I met nine other very capable and strong candidates in the Final, who were all deserving of the opportunity, so I feel very fortunate to be selected as the winner. The real challenge now lies ahead and cannot wait to get started on this journey for what I believe will be a fantastic year ahead. I can’t wait to get started and I will give it all to prove I am a winner worthy of this amazing opportunity.”

The Infiniti Engineering Academy is now in its fourth year and involves a search for the best young engineers in the world. For the 2017 edition of the contest, seven placements were available with one winner being chosen each from Asia-Pacific, Canada, China, Europe (incl. Russia), Mexico, United Arab Emirates and US regions, to work with Infiniti and Renault Sport Formula One Team. The 2017 edition of the Academy attracted over 12,000 registrations from 41 different countries, thus setting a new record with a near-threefold increase on last year.