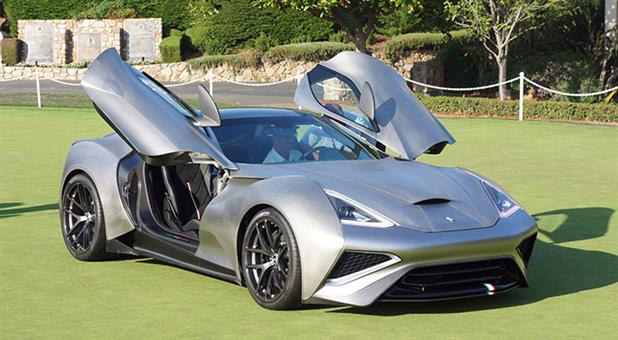 Icona, the design house and coach builder that was originally established in Turin and is now based in Shanghai has come up with a sleek, stylish car that can give any supercar a run for its money, not when it comes to performance, but when it comes to design.

The company is selling its one and only Vulcano Titanium supercar that is made from Titanium for a mindboggling 2.5 million euros. The one who is lucky enough to own this car will have a car that is truly one of a kind, as the company said it was built using a process that it termed “unrepeatable”. Over 10,000 hours of hand-crafted work went into creating this beauty. So, this is one car that is definitely worth as much as a Pagani, a Bugatti or a Koenigseggs.

Icona initially designed the car as a concept vehicle to showcase its strength in design. The concept first made its appearance at the 2013 Shanghai auto show, but its body was made from composite materials and aluminum. Icona first unveiled the titanium version fo the vehicle last year at the Pebble Beach Concours d’Elegance, and has now put it up for sale.

The car is powered by a supercharged 6.2-liter V-8 engine obtained from the C6 Chevrolet Corvette ZR1. The engine is positioned in front of the cabin but behind the front axle, giving it a front-midship position that significantly improves the handling and dynamics. The maximum output of the engine is 670 horsepower and 620 pound-feet of torque, with drive going to the rear wheels via a paddle-shifted transmission. The Icona can go from 0-60 mph time in 2.8 seconds and has a top speed of 220 mph.

When it comes to the interiors, the cabin is made mainly of carbon fiber and trimmed in a mix of Poltrona Frau Leather and Alcantara, with the race-inspired design. The main instrument cluster is a 12.3-in digital screen, while there is a larger, tablet-like screen with touch capability that is located in the center of the dash. Beneath this larger screen are jetfighter-style switches. The seats are just as sleek and they are carbon fiber buckets sourced from Sabbelt.

The Vulcano Titanium will be on display at the 2016 Salon Privé Concours d’Elégance that will be held from September 1 to 3 in Oxfordshire, United Kingdom from September 1-3.