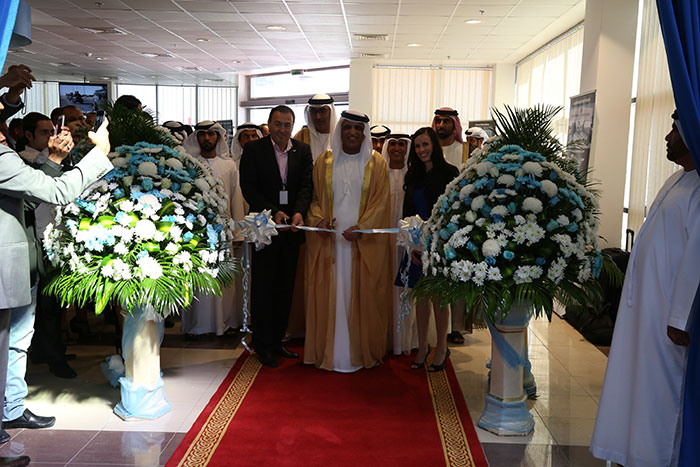 In a bid to expand its presence in the Middle East region and cater to the growing demand here the International Armored Group (IAG), which specializes in the manufacture of customized and premium armored vehicles, armored components and ballistic glass, today opened a new factory in Ras Al Khaimah, UAE.

The formal opening ceremony of the factory in the RAK Free Trade Zone was a gala event which was attended by high profile CEOs of private entities, ambassadors, military personnel, official government bodies and other senior officials. Production at the new factory was formally inaugurated by H.H. Sheikh Saud bin Saqr Al Qasimi,Supreme Council Member and Ruler of Ras Al Khaimah.

The new factory is a state of the art facility with a production area covering 35,000sq. meters including areas for ballistic glass and laser CNC cutting. The facility will have an impressive monthly capacity of 150 vehicles thus increasing the current production volume by 40%. Another notable feature of the factory is a fully sheltered stock area that can hold up to 600 armored vehicles. The facility will be dealing with all the aspects of the pre-production and production process including OEM chassis disassembling, ballistic steel fabrication, painting, upholstery, suspension and other systems upgrading, ambulance conversions, tactical armored vehicles engineering and production, testing and training.

Commenting on the opening of the new factory, Ramy Jallad, Acting CEO, RAK FTZ said that the inauguration of IAG’s new production facility is an important milestone not only for IAG but also for RAK FTZ as it highlights the growth of the company with the aid of the free zone’s business-friendly environment. Currently, RAK free trade zone caters to over 8,000 companies with premier business solutions and services.

Talking about IAG’s strategy behind opening a new vehicle manufacturing facility in the region, Dr. Anton Stefov, President & CEO, IAG said: “According to recent reports from the defense and military industry, top-line defense spending in the Middle East and North Africa, led by Saudi Arabia and the Emirates, will top US$120 billion per year by 2016.”

He added that there is great potential for the company both from a regional and global standpoint as demand increases for superior quality and high performance armored vehicles. The company will more equipped to meet this growing demand with this shift to a bigger and more efficient manufacturing facility.

Some of the new products IAG showcased at the opening included the Guardian Extreme, a customizable 12 military personnel carrier with B7 ballistic and blast resistance, which uses IAG’s latest patented technologies and newly developed suspension system to deliver a highly appealing combination of extreme off-road capability, survivability and commercial compatibility to users. Other notable models included a new custom engineered Armored Water Cannon vehicle for firefighting and riot control.