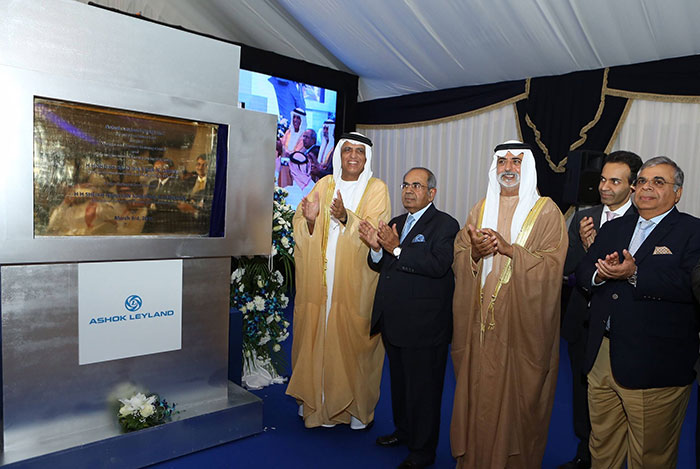 Ashok Leyland is the second largest manufacturer of commercial vehicles in India and the fourth largest manufacturer of buses on a global basis. The USD $2.2 billion, which is a part of the renowned Hinduja group of companies has a global manufacturing footprint with six factories in India, one in Ras Al Khaimah and one in Leeds, UK. The Hinduja has announced that it will be reinforcing its commitment to the UAE and the entire GCC region with significant expansion of the Ashok Leyland facility in Ras Al Khaimah. The foundation stone for the RAK plant’s capacity expansion and Design and Service Training Centre was laid by none other than His Highness Sheikh Saud Bin Saqr Al Qasimi, Supreme Council Member and Ruler of Ras Al Khaimah.

Speaking at the function, Vinod K. Dasari, Managing Director, Ashok Leyland said that the company was honored to have His Highness attend the ground breaking ceremony for expansion of the RAK plant. The plant plays a crucial role in the supply of buses to cater to the need of countries in the GCC region and the facility is being expanded in view of the company’s plans to expand aggressively in the African market. He added that the plant has served as a pioneering hub for auto manufacturing in the UAE while deepening trade links between India and the UAE. The expansion will lead to considerable increase in both direct and indirect employment.

Ashok Leyland executives made it clear that the plant will soon be converted into a center of excellence for the company’s overseas expansion. The first step in this direction is the new design and service training center which will be set up shortly.

As part of the value addition process and to contribute significantly to the econonmy, Ashok Leyland has been successful in creating a vendor hub in Ras Al-Khaimah and the nearby Emirates. “We are aiming to grow significant localization levels soon and towards this we are working very closely with RAKIA on creating an automotive cluster in Ras Al-Khaimah where our vendors will set up shops,” Dasari added.

He added that the company will be making an entry into the value-premium segment of the UAE automotive market as part of enhancing its product portfolio. This would be in addition to its dominating presence in the school bus segment of the UAE where it already has a 70 per cent market share due to the enhanced safety features and the sturdy design of its models.

The expansion of the plant and introduction of new models in the regional market will entail an investment outlay of USD 10 million and this will include the regional launch of midi buses and trucks.

Currently, the RAK factory produces 12 buses on a daily basis. With the expansion of the plant, this is expected to increase to 20 buses per day in addition to the production of trucks. The factory was inaugurated in December 2010 by the Ruler of Ras Al Khaimah and is steadily growing. The expansion will triple the plant’s annual capacity to 6,000 units.