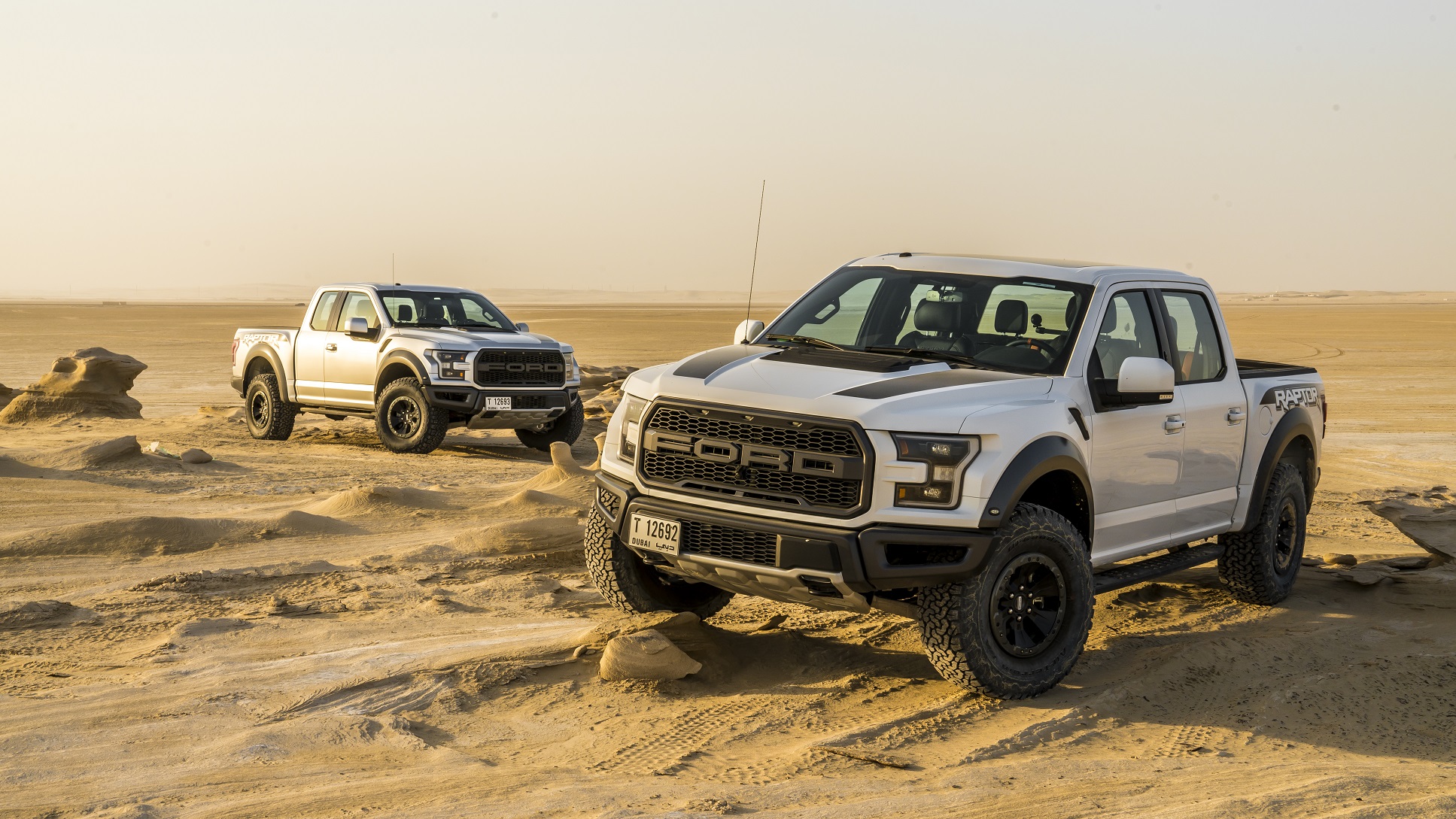 First launched in 2009, the Ford F-150 Raptor is a dedicated offroad pickup that has proved to be highly popular. Ford has now launched the all-new 2017 F-150 Raptor in the Middle East market with the tough F-150 Raptor getting a makeover to make it even more spacious, flexible and versatile.

The truck is tough enough to be a worthy contender in the Baja races and comes with a purpose-built engine, chassis and suspension that makes it easy for the vehicle to tackle both tough desert dunes and rocky terrain with equal ease.

Like the current F-150 pickups, the 2017 Raptor has a high-strength, aluminium alloy body and a high-strength steel frame. When compared to the 2014 model, the 2017 Raptor is up to 227 kg lighter. The high-output second-generation EcoBoost engine works in tandem with the 10-speed transmission to deliver a toruqe-to-weight ratio that is 21 per cent improved and fuel efficiency that is 23 per cent higher than the EPA-rated combined fuel economy of the previous version. The new engine has greater efficiency and is more powerful than the  6.2-litre V8 engine in the current version, with an output of 421 PS at 6,000rpm and 678 Nm of torque at 3,750rpm.

Speaking about the 2017 model, Thierry Sabbagh, managing director of Ford Middle East said that the Raptor is positioned as a no-compromise, off-road performance machine, which is possibly the best high-performance off-roading pick-up truck available. It is one of the most successful and popular trucks in the world, and further reinforces Ford’s supremacy in the truck segment.

The most notable feature of the all-new F-150 Raptor is its purpose-built fully boxed frame which acts as the truck’s backbone. This is the strongest frame in the F-150 range and has more high-strength steel than the outgoing Raptor.
The F-150 Raptor’s external appearance is similar to that of Trophy Trucks, which are known for being the fastest and most powerful class of off-road pickups. When compared to a standard F-150, the F-150 Raptor is 150 mm wider for better off-road stability. The truck also has its first-ever dual exhaust and new 17-inch wheels which have been factory fitted with next-generation BFGoodrich All-Terrain tires that have been designed for off-road performance.

Smartest F-150 Raptor ever
The F-150 Raptor has an all-new, second-generation high-output 3.5-litre EcoBoost® engine which is more powerful and efficient than the previously used 6.2-liter V8 engine.

Ford’s EcoBoost engine has gained a following among both customers and racing fans The first generation of the engine was quite strong and efficient and the Ford Performance team specially tuned the second-generation 3.5-liter EcoBoost for the new Raptor.
Key 3.5-litre EcoBoost engine improvements include a new twin direct and port-fuel injection strategy, stronger and lighter crank and valvetrain components, a redesigned twin-turbocharger system with electronic wastegate, and a redesigned valvetrain and variable-displacement oil pump.

The new refinements to add power for the high-output EcoBoost engine include more aggressive turbo compressors with increased boost calibrations, cast stainless steel manifolds, full dual exhaust, oil-cooled pistons and more aggressive engine control calibrations.
Off-road driving is easier with an all-new four-wheel-drive, torque-on-demand transfer case, having advanced, easy-to-use off-road mode driver-assist technology.
F-150 Raptor’s new transfer case, which balances the power distribution between the front and rear wheels, effectively combines the best qualities of clutch-driven, on-demand all-wheel drive with a durable, mechanical-locking four-wheel drive to lend power to the wheels even in slippery conditions.
Drivers can use this pioneering off-road driving mode technology which has evolved into an all-new Terrain Management System to choose modes that optimize driving dynamics depending on the environmental conditions, which can range from snow to mud, sand and more.

The all-new 10-speed automatic transmission, which comes as a standard feature on the 2017 Raptor, comes with Auto Start-Stop technology and an integrated electric pump that significantly boost driving efficiency.
The transmission has a closer ratio between gears and the Ford-patented hydraulic control system to optimize the power and torque curves of the new 3.5-litre high-output EcoBoost engine.
The Raptor has all-new adaptive shift algorithms to closely monitor over a dozen powertrain and driver control signals in real time. This ensures that the right gear is used at the right  time to enhance the driving experience. The model has normal, sport, weather, mud/sand, rock/crawl and Baja modes for the suspension. Non-sequential shifting is made possible with a high-speed, one-way clutch.
The reduction in weight has contributed significantly to the improved shift performance. The 10-speed gearbox, which is the first one from Ford not to have cast-iron components uses highly advanced materials and alloys for optimizing weight. An integrated torque converter/turbine clutch has helped to shave a further one kilo from the weight of the vehicle.

Ford has re-engineered almost every component to come up with a stronger, tougher more durable version of the ultimate high-performance off-road pickup truck, the all-new 2017 Ford F-150 Raptor, which is now available in the Middle East market at the retail level.