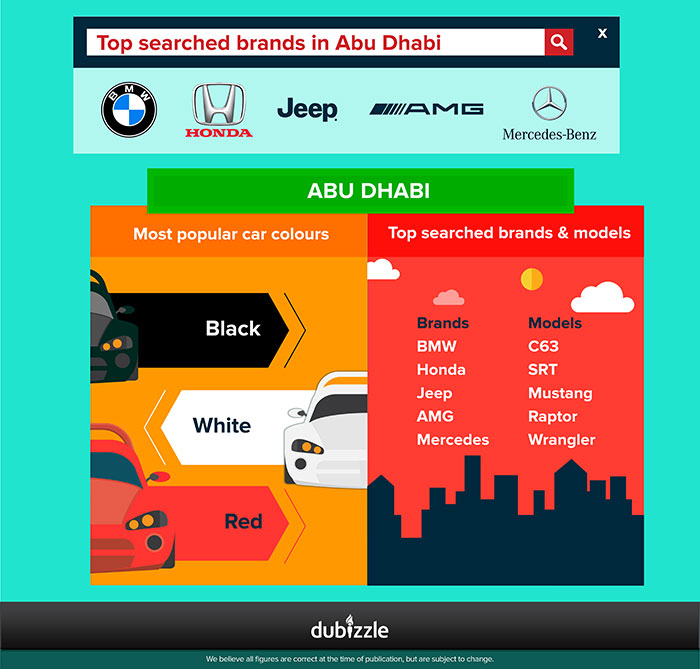 For the first time dubizzle, which is the one of the leading classifieds website in the UAE, has published its first report on the automotive scene in Abu Dhabi, revealing insights into the used car market in the capital.

According to statistics revealed by Dubizzle, based on the ads placed on the site from January to November in 2015, the Nissan Patrol is the model that is most in demand, with over 500 ads and an average asking price of AED 166, 327. More than 125,000 ads were placed on the site in the automotive section during this period.

The most popular brands in Abu Dhabi based on the Dubizzle report are Toyota, Honda, Jeep, AMG and Mercedes, and the most popular colors are black, white and red.

Abu Dhabi residents confirmed its reputation as the city with a soft spot for luxurious cars. The three cars that commanded the highest asking prices between the months of January and November this year were a 2016 Porsche 918 Spider, 2016 Lamborghini Aventador LP 750-4 Superveloce and a 2016 Rolls Royce Phantom Coupe, which were listed for AED 4.6 million, 2.45 million and 2.3 million respectively. Fancy number plates too came with hefty price tags like the number plate 570 code 6, which was listed at AED 570,000 and is reportedly one of the most expensive number plates on dubizzle.

Osman Bhurgri, Product Marketing Manager – Autos at dubizzle UAE, said: “There is no doubt that the people of Abu Dhabi have a great passion for cars, with the recent Formula 1 Grand Prix event being a classic example of this. The auto industry in the UAE has continued to grow at a rapid pace, and the country remains one of the fastest growing automobile markets in the region. That being said, the used car market has also showcased some great resilience, and research has predicted by 2016, eight out of 10 people will buy a new or pre-owned car in the UAE.”

Bhurgri concluded by stating that dubizzle’s Automotive Report will serve as a valuable tool for understanding the latest automotive market trends in the UAE. Along with this report that gives insights into the trends among customers in Abu Dhabi, the report on the automotive trends in Dubai which dubizzle plans to release early next year will help players in the regional automotive sector to get a fairly accurate idea about the tastes of residents in the two major cities in the UAE.